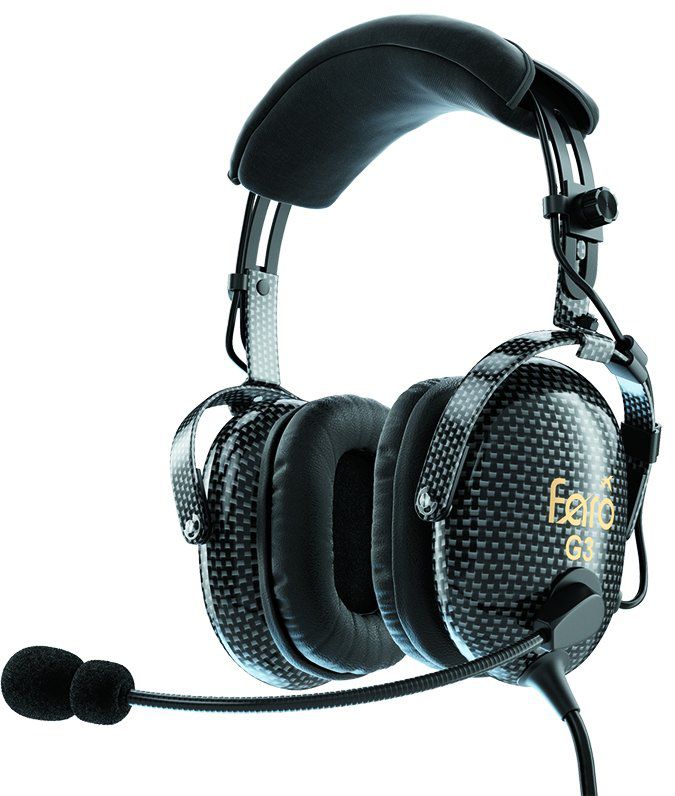 The midpriced headset market is a crowded space, and coexisting with veteran brands like Lightspeed, David Clark and Flightcom, to name a few, is no easy task. Adding to the challenge is the competition and superior performance of headsets in the market’s high end.

On paper, Faro Aviation’s $689 flagship G3 ANR headset hits all of the required high points to go the distance. It’s lightweight, loaded with features and has a good warranty. We flew with the G3 Carbon for a few months to see how it compared with the rest of the models in our long-term evaluation pool of ANR models. Here’s a summary.

Weighing in at 9 ounces, the G3 has carbon fiber earcups and carbon fiber suspension hardware. For comparison to higher-end flagship models, the Bose A20 weighs 12 ounces and the Lightspeed PFX is 13.9 ounces. But weight doesn’t matter as much as clamping pressure, in our view.

You can tweak the G3’s fit (and resulting clamping force) with two thumb knobs, which move the earcups up and down the headband, which has a padded head cushion. The boom for the electret microphone can be rotated 360 degrees and placed on either side of the headset.

When properly adjusted, we rate the G3’s clamping force as moderate. While far from painful, we think the benchmark—Bose’s A20—wins by a sizable margin. Still, it’s nearly $600 more than the flagship Faro.

Backseaters with heads of all sizes never complained about the G3’s comfort, although one experienced slight discomfort with metal-templed sunglasses. The G3’s active noise reduction is rated at 52 dB and we found that the ANR circuitry performed well in our two evaluation aircraft: a Cessna 210 and a Cirrus. We never experienced ANR rumble or other imperfections we half expect when trying new models. When passive (with the ANR circuitry off), the G3 is a good performer and we attribute that to the tighter clamping force. Lose the batteries and the set outperforms a passive Bose A20, in our estimation.

The set uses two AA batteries and Faro discourages using rechargeables because they can provide uneven voltage, which can flaw the ANR circuitry. Depending on the cockpit noise level, Faro says you can expect up to 40 hours of battery life, but we didn’t log that much time with the headset. We immediately appreciated the automatic shutoff, which powers down the ANR circuitry after an hour if it isn’t connected to audio jacks.

Additionally, we applaud Faro for including battery power status annunciators, which flash green when power is strong, flash amber when low and flash red when the batteries are about to quit. The annunciator is perfectly positioned above the on/off power button on the face of the control module.

The module is simple and logically designed, but it’s a bit too fat for our liking (it seems heavier than the headset), plus we struggled with the removable battery compartment door on its backside. The left and right volume controls are strategically placed on the upper corners of the module’s case and adjustment is linear, offering plenty of gain for aircraft radio/intercom and Bluetooth audio input. There’s also a 3.5-mm wired aux input. A Bluetooth status annunciator is located directly above the Bluetooth control button. There’s also a dedicated Bluetooth audio volume control, which eliminates having to reach for your smartphone or tablet to tweak the volume of the tunes. We had no trouble pairing to an iPhone 5, 6 and current-gen iPad.

Similar to high-end audio panels and intercoms, an auxiliary audio priority slide switch controls which audio gets switched through—either A, B or C. The “A” selection is intercom priority, which mutes the Bluetooth and aux input when there’s intercom chatter. The “B” selection mixes all audio sources together and “C” isolates the intercom, muting all audio sources, which is useful for passengers.

Like all of the headsets in the Faro line, the set has a 3-year warranty, a 30-day return policy and comes with a decent soft storage bag.