Nevada-based Faro Aviation has come on strong the past few years in the competitive headset market with a diverse model lineup. The latest Stealth 2, which is sold exclusively through Sporty’s, comes in two price points. There’s the $249.95 passive version and also the $449.95 ANR model with wireless Bluetooth, which is what we tried for the latest in our series of headset field reports.

We think the price is fair and the set has smart features, but its thick ear seals may be a tough fit for smaller heads. 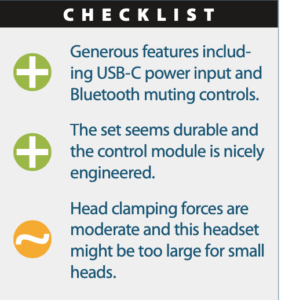 Think of the Stealth 2 as a more traditional aviation headset with its adjustable metal headband. It has double-thick ear seals (1 inch thick) which makes the set seem larger than it actually is. Still, Faro managed to keep the set’s weight (16 ounces) in line with others in its class—mainly the Lightspeed Sierra and Sigtronics S-AR.

Given the mass of those ear seals, fitting the set is important and you start by loosening the thumb knobs on headband’s rails. Once you have the set on your head you adjust the clamping pressure by simply moving the cups up or down, and also fitting the seals so they’re completely over the ear. And unless you were born with huge ears, that should be easy given the size of the seals. Once you find the right fit, crank down the thumb knobs.

In our evaluation, every pilot and passenger who tried the Stealth 2 initially commented about the clamping pressure—which if you’re used to wearing a Bose A20 or Lightspeed Zulu 3 will seem high. We try hard to not compare low- and mid-priced headsets to these flagship models—which are obviously priced considerably higher. But on the other hand, we think Bose and Lightspeed set a standard for which any aviation headset is judged these days and it’s impossible to not make comparisons for fit and performance.

We like that the set’s electret microphone can be placed on either earcup, and that it has 360 degrees of rotation. Even better is that it’s easy to position the flexible boom so the microphone is just where you want it in proximity to the lips, which should be roughly 1/8 inch away. There’s nothing worse than a mic boom that has too much slop for it to precisely stay in place. That’s not the case with this one—Faro got it right.

The Stealth 2 is powered by two AA alkaline batteries and the set has a 40-hour battery endurance. That’s good, but keep in mind that operating the set’s Bluetooth function will shorten battery life, as will the level of noise reduction that’s required in a given cabin. The batteries are loaded under a removable door inside the set’s control module.

The battery compartment also houses two dip switches. One switches the set from stereo to mono and the other controls the auto shutoff. When it’s enabled, the headset automatically powers off five minutes after the set is removed from the audio jacks or five minutes after the intercom is powered down. If for some reason the Bluetooth is left on (or the wired auxiliary input is active), the set powers off after one hour.

With panel USB power modules (and portable power banks) fairly common these days we like that the Stealth 2 has a USB-C power input port. It’s located on the side of the control module and bypasses the battery power. The set comes with a USB-C power cable as standard.

We’re generally critical of any headset’s control module and we give the Stealth’s controller high marks. It seems the right size and the buttons and switches have a durable feel, but we wished the mic and phone plugs were longer. They extend roughly 12 inches from the top of the module—which seems like enough length—but for audio jacks that are tucked deep under the panel, they may be too short.

One of our test aircraft has a portable intercom Velcro’d to the floor and the audio cables barely reached the jacks, leaving the module awkwardly suspended between the intercom and the front corner of the seat. Another 6 or so inches could be enough. We also wish all headset manufacturers would follow the lead of Lightspeed and wrap the audio cables in a braided sheathing. The ones on the Faro are thin, and we wonder how they’ll hold up to long-term abuse.

The top of the module’s face has thumb controls for independent adjustment of each earphone and the volume pots seem linear throughout the travel. Below the volume knobs is a power status annunciator. It flashes green when the battery power is strong, it flashes amber when it’s low and flashes red when the voltage is very low. We like having the warnings, especially after not using the set for a while where you might guess how much life remains in the AA batteries.

Turn the set’s ANR circuitry on and off (hold it for one second) with a round power button in the center of the module, and turn the Bluetooth on and off with a square button below it. A Bluetooth status annunciator flashes blue and red when the set is in pairing mode and it flashes red (twice) when it disconnects. The initial pairing with three vintages of Apple iPhones was easy, and the set connected the first time within a few seconds.

And when using the Bluetooth you have the option of setting the audio priority. This means you can mute the Bluetooth audio when transmitting or receiving radio transmissions. Whet the switch is set to the airplane icon the set detects transmissions and significantly lowers the volume of the Bluetooth source. 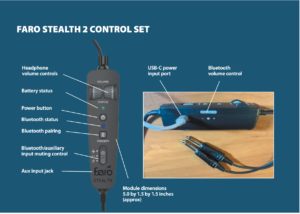 Faro did the right thing by putting a dedicated volume control for the Bluetooth and auxiliary audio input on the side of the module. It’s nicely positioned for quickly lowering the volume when you need to.

We’ll cut to the chase and say up front the Stealth 2 is a big set. It not a headset for small children and might be the wrong choice even for adults with petite faces. The ear cups do have a good range of adjustments for getting the right fit and there’s sufficient padding where the top of the frame meets the head.

If you’re accustomed to flagship models from Bose and Lightspeed you might find the Stealth 2 to have far more clamping pressure. It helps that the ear seals are soft, but they are wide-reaching on small faces. We evaluated the set during the winter, so we couldn’t see how much sweat they might generate against the skin. Eyeglasses seem to fit fine, thanks to the soft and well-cushioned ear pads.

As for ANR performance, the Faro’s circuitry did well. In a noisy cabin at takeoff power we only slightly heard the signature rumble of the ANR circuitry overdriving as it tried to compensate. We brought along a Bose A20, a Lightspeed Sierra and a David Clark One-X for comparison and the ANR circuitry in all of them outperformed the Faro.

To be fair, these are models priced higher (the Bose is more than twice the price), but they’re worth using as a benchmark comparison.

As for audio quality, we think the Stealth 2 is acceptable. It won’t win any awards for high-fidelity sound, in our view. The stereo Bluetooth audio was, like the radio/intercom quality, acceptable but we’ve heard better. Again, given the set’s $450 price point we’re not complaining. Just don’t expect to be blown away with exceptional audio quality.

The microphone audio is quite good when we sampled it through a variety of intercoms—both vintage portable units and the latest panel-mounted units from PS Engineering and Garmin. It never clipped and modulation was crisp and accurate. Again, it’s easy to position the bendable boom to place the mic right where you want it.

That’s how we summarize the Faro Stealth 2 ANR, particularly for buyers (especially students) looking for a generously equipped set that won’t break the bank. We’re tempted to ding it for its large size, but it seems those fat ear seals contribute to decent performance. Our age-old advice for headsets still stands: Try it before you buy it.

Visit www.faroaviation.com and buy it exclusively from Sporty’s, at www.sportys.com.