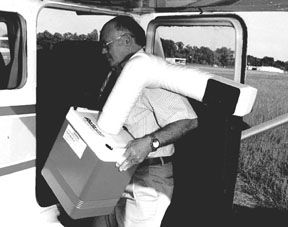 Put a fan on the kitchen table blowing over a bowl of ice and you have the concept behind the Porta-Chill. It seems so obvious that it couldnt possibly work and your IQ will be questioned if you insist that it does. But when the OAT on the ramp breaks into three digits and the cabin of your airplane could double as a glazing furnace, youll have the last laugh. This thing works to chill a blazing cabin.

Everyone who sees the Porta-Chill has the same reaction. Hey, I could make that for practically nothing! Maybe. After all, its just an ice chest with a fan, some tubing and a couple of louvers. Its the $300 price tag that sets pilots back on their heels. But after two of us checked it out at AirVenture last summer, we realized there was a lot more to it than PVC and that its well-built.

Besides, were from Louisiana, where the heat and humidity can make start-up, taxi, and climbout two steps beyond miserable, so once that cold air hit us, the plastic came out of the wallets.

The Porta-Chill is an Igloo Legend 24 ice chest, measuring 10 by 13 by 15 inches. Internal flue-struts are added, along with grids and a special top, with a fan and ducting to complete the package.

Put in crushed or cubed ice, clamp the top down, position the ducting using the pin-ratcheted swivel assembly (the whole thing adjusts in almost any direction), plug it into the cigar lighter (12 volts) and enjoy cool to cold air for a short time.

Crushed or cube ice provides genuinely cold air for 20 to 25 minutes. Using the trays to make your own ice blocks (not included) allows you to have slightly warmer air (still cool) which will last almost an hour.

Everyone agreed that it looked dumb but the ramp rats we showed it to – with an OAT of 105 degrees-were unanimous in their response, which was, Well Ill be damned.

Its not an air conditioner. Its a temporary cooling unit which blows really cool air directly on the pilot and co-pilot and makes life pleasant until you get to cooler altitudes. Online, find it at www.portachill.com for info and ordering, or call 877-474-2841.

Thermo Cube Pre-heat Control
Wanna save a few bucks on electric preheat when it gets cold again in another six months?

If your preheat is combustion-based, well assume youre smart and never, ever leave it unattended. For those who have electricity available, the options are broader. In Juneau, of course, you just leave the thing plugged in until mid-July. In more temperate climes, that option wastes a lot of power.

On the other hand, the ad hoc approach inevitably will catch you short-and cold-some chilly morning when you either couldnt get to the airport to hook it up in advance or didnt know you were going until the last minute. Every winter, the aviation forums can be counted on for multiple threads on arrangements to automate non-permanent electric preheating, including elaborate discussions on setting off pagers hooked in line and the like.

Theres a simpler way. When we saw a reference to the Thermo Cube, it was one of those smack-yourself-in-the-forehead Why didnt I think of that epiphanies. A thermostatically controlled electrical outlet, the Thermo Cube comes in five versions, with on temperatures from 0 to 120 degrees. The upper ranges are intended for fans and coolers, of course.

The heating controllers handle 15 amps and 1800 watts and come in three ranges: the TC-1, which turns on at 0 degrees and off at 10 degrees and, more useful for our purposes, the TC-2, on at 20 degrees, off at 30 degrees and the TC-3, which starts the juice to the heater at 35 degrees ambient and off at 45 degrees.

In usually balmy North Carolina, we opted for the TC-3 to run a Reiff HotPad and cylinder HotBand heating system. The hangar has power but no supplemental heat. For testing purposes, we placed a darkroom thermometer hooked to a Remove Before Flight lanyard on top of the engine, cowl flaps closed, cowl plugs in and a quilted bedspread draped but not fitted over the cowling.

An unusual March hard freeze yielded overnight temps to 22 degrees. By our 11:00 a.m. arrival, the spring sun had already brought the air temperature in the hangar well above the 45 degrees, the Thermo Cube cutoff temperature.

Nevertheless, when the darkroom thermometer was retrieved from inside the cowling, it registered a toasty 85 degrees. A previous test under similar conditions at the coldest part of the morning, while the Thermo Cube was still engaged, clocked an impressive 100 degrees on a spare OAT probe inside the cowling. On both occasions, start up had all temps within the green in under three minutes.

A quick check of the Web indicates that the most common use for the Thermo Cube is aquatic applications, so you might be able to find one cheaper at a farm supply, water garden or aquarium establishment. Probably the easiest source, however, is good ole Sportys, which sells the TC-2 or TC-3 online for $13.95.

If you reside in Siberian latitudes, by all means leave it plugged in all the time. Or you could just rely on the oil pan heater thermostat, if it has one. Just dont forget those cylinder bands or dipstick heaters are likely on all the time, which is a waste of juice and money in more moderate areas.