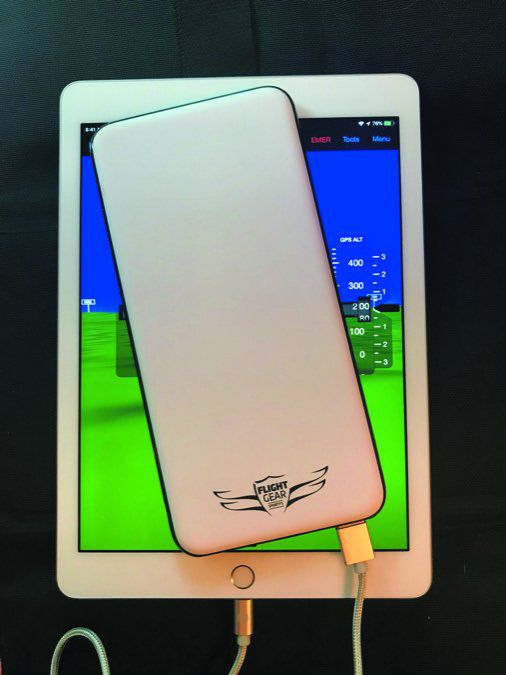 Bring enough portable gadgets on a trip and inevitably you’ll be looking for power to recharge them. Sporty’s now offers what it thinks is the ultimate solution with its $79.95 Flight Gear backup battery pack. I’ve been using it to charge my stuff and quickly learned to like its performance and utility.

At first blush, the battery seems big, measuring 7.75 by 3.75 by 0.5 inches, but its saving grace is the thin profile. That makes it easy to slide into a map pocket, flight bag and the front pocket of a backpack. I stashed it in all of the above, but it was a touch too large to comfortably fit in a jacket or pants pocket. The casing is anti-slip, which keeps it from coming out of the hand, but I wish it were even grippier. The drawback to the thin footprint is that it can easily slide between a seat. When the airplane is put away, the battery could work on a motorcycle or bicycle, if there’s the right on-bike storage.

The bottom of the case is stamped with an airport traffic light signal guide, the cruising altitudes for VFR and IFR flying, emergency transponder codes and a basic emergency checklist for a carbureted engine failure.

The battery has its USB output ports well positioned on the front edge of case. There are three standard USB-A output charging ports and one USB-C output/input port. A power switch, LED status lamps and Micro-USB port are on the side of the case.

I have a drawer full of gadget interface cables but can never seem to find the one I need at the time, but the battery pack eliminates that nuisance because it can be charged with a Micro-USB, Type-C or Apple Lightning cable. The convenience there is you’ll only need one cable to charge both the battery back and whatever device you need to top off, thanks to a variety of ports.

Perhaps what I like best about the Flight Gear battery pack is the ability to charge multiple devices at once. My typical outing in the airplane has me running my iPhone, an iPad and a variety of action cameras and stabilizers. With 20,000 mAh of capacity (three times the power of the typical iPad), the battery has more than enough juice to charge them all at the same time. The battery comes with a 6-inch Micro-USB charging cable for replenishing the pack and simple four-light status annunciators show how much juice is remaining. Total charging time of the battery (from a flat condition) is around seven hours with a Micro-USB cable and around 12 hours with a USB-C cable. The device has a microprocessor that monitors the battery health and will shut down before there’s an overvoltage, overcharge or a short circuit.

It’s also smart enough to detect the optimal charging current for the connected device and passes along the right amount of power. The USB-C port is dual purpose, either accepting charging voltage in or outputting voltage, based on the device that’s connected. This product is a winner.