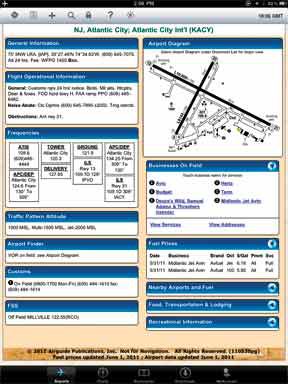 Airguide Publications Flight Guide has long been to airport information what Jeppesen is to approach plates: Much of the same information you could get from government or other sources, all collected in a neat package with superior layout and design.

It was inevitable Flight Guide would come out for the iPad. The latest version adds the features required to be a contender in the field, such as georeferenced approach plates and a moving map. It also adds integration with Flight Guides own GPS receiver, which paves the way for ADS-B or XM weather integration into the app.

Flight Guides strongest card is their airport information and graphics. Theyre just easy to read. Case in point was a VFR flight down to Atlantic City, N.J. The direct VFR route bisected Restricted areas R-5002 A-E. Looking up the altitudes for all of these is usually an annoying task of digging around on the margin of the sectional chart-which, by the way, is impossible on a seamless sectional used by most iPad moving maps-to find the airspace details. But on the Flight Guide airspace graphic, it couldnt possibly be clearer. Common VFR reporting points and prominent landmarks are also handy features. Admittedly, only larger airports merit this bonus page.

The same is true of the airport diagram on the airport page. In addition to the usual data, the location of windsocks is noted, as well as numbered flags that cross reference to details for car rental, dining and the FBO. The diagram quickly expands or shrinks with a double tap, and shows your position on the field if the iPad has a GPS position fix. A plus of Flight Guide has always been offering diagrams of far more airports than the government does.

If the iPad has an internet connection, METARs, TAFs and fuel prices (at that airport and nearby) load automatically. We did wish the iEFB would grab a nearby METAR for airports that dont have their own, but thats a minor point. You could argue the Flight Guide data and diagrams dont leverage the color available on the iPad, as they are reprints of the paper versions. But on the plus side, this made them easily readable even in direct sunlight. The iEFB also offers a dimming feature for nighttime.

While seamless charts hide the chart margins, they are better for a general-use moving map. Flight Guide lets you switch between seamless or not on the fly. Speed, course and altitude show on any map view when connected to a GPS.

Flight Guide offers a full range of maps-sectionals, en route, terminal, WAC-but theres no flight planning or route. So you can see where the aircraft is, but theres no familiar pink line showing the course, nor is there any way to use the map to calculate routes, distances and times. Thats not a critical miss if your goal is just using the iEFB as a digital chart, but its something virtually every competing app offers. Theres no advanced weather for flight planning or the ability to file flight plans for the app, either. Flight Guide says this is in the works.

We were surprised that NOTAM data wasnt downloaded along with weather and fuel data. This is a bigger miss, in our view. One of the great benes of having digital airport data is that you can grab all the NOTAMs before a flight and then double-check any specific one in the air. Thats especially useful for instrument approach NOTAMs when you may not know which approach you need until you arrive.

Overall navigation of the app is good, although the search function is less forgiving than apps like ForeFlight or WingX. Download management is good, if not as fast as competing apps.

Flight Guide pricing could take a lesson from the simplicity of their diagrams. There are nine different plans ranging from $109/year ($9.95/mo) to a whopping $319/year ($28.95/mo). The simplest plan gives you the Flight Guide diagrams and sectionals for the CONUS, but nothing is geo-referenced and there are no instrument procedures. The most expensive one is VFR and IFR products for all 50 states (all data) and the Caribbean (charts only). In that plan, all maps, diagrams and approach plates are georeferenced (geo-ref data by Seattle Avionics). The remaining seven plans are combinations in between those extremes.

If you like Flight Guides boutique data, the basic VFR package is a reasonable premium over something like ForeFlights $79/year, even though ForeFlight offers extensive flight planning as well. If youre comparing georeferenced, IFR and VFR data, though, now the Delta could reach over $150 in favor of ForeFlight or WingX, not even including the extra features of those apps. How much is the custom-collected and nicely presented data worth to you?

We think Flight Guide has an app thats a contender for the right user. Subscribers also get access to the Flight Guide data online, so theres an extra perk. It will become more interesting when they integrate a few more features, such as flight planning and inflight weather. Well keep you posted.