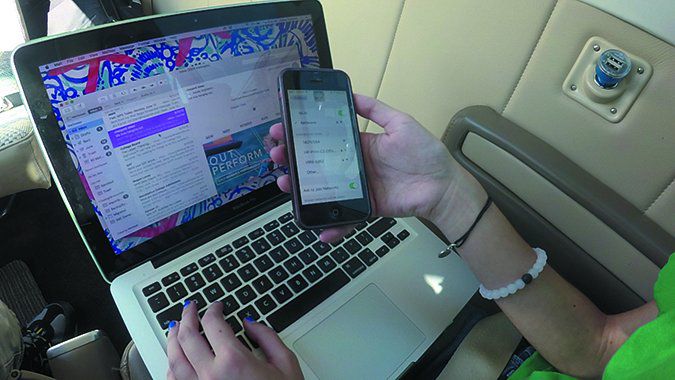 We set out for a flight demo in Jeff Kauffman’s AeroWave-equipped Beech A36 Bonanza with enough smartphones, tablets and laptop computers to keep a teenager busy until the tanks run dry. As expected, the AeroWave showed some limitations that buyers need to understand.

Connecting a smartphone is easy. Put it in airplane mode so it doesn’t try to connect to a ground network, look for the AeroWave network in Wi-Fi settings and type the password to join. We happened to have all Apple devices, including a MacBook Pro computer, three iPhone 5S smartphones and a latest-gen iPad running the ForeFlight Mobile app. All of the devices connected without issue, but the AeroWave wanted no part of delivering data to all of them at the same time. With all of them connected at once, we couldn’t even send or receive a short iOS text message within the cabin. But, the system seemed happy with two devices connected. Text messages flowed more slowly than on traditional networks and simple webpages like Airnav.com loaded more slowly than we would have liked. We asked Kauffman—the AeroWave project technical lead—for an explanation. He had several.

Turns out there are convincing reasons for peaks and valleys in performance, aside from device load and having too many applications running in the device’s background.

“You can experience a system slowdown that’s similar to what happens when you are working at home and the neighborhood kids get out of school. The internet simply gets slow,” he said. But it’s more complicated than that.

Kauffman explained that the actual performance of a satellite datalink can vary over time and depends on many variables, including the available bandwidth, power and noise, as well as the number of users sharing the resource. There isn’t a lot that can be done about noise (including background noise and possible ground interference from high-power radar), but by using spot beams, the satellite can increase the power to a particular area of coverage, thus improving the signal-to-noise ratio. The Inmarsat satellites have directional (and movable) antennas that cover a specific area on the earth.

Kauffman noted that having a directional antenna on the aircraft can increase the effective power, plus the output gain and allocated spectrum of the satellites can be tweaked. In the end, you’ll get better performance when the number of people using the system consume less than the maximum bandwidth available for the satellite’s spot beam. Worth noting is that our flight trial conducted in central New England is within the spot beam shared by the highly utilized Washington, D.C., area.