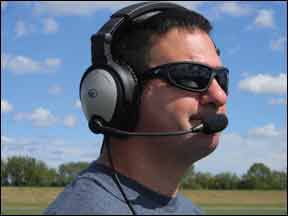 We like the combination of our ANR headsets and Oakley M-Frame sunglasses for short trips but not for long, non-stop hauls. That’s because the clamping pressure and resulting ache it creates on the noggin is unbearable. Sunglasses maker Flying Eyes has an alternative, with pilot glasses that are designed with webbing straps instead of traditional temples. We gave them a try and liked what we saw and felt.When we reviewed sunglasses in the December 2010 issue of Aviation Consumer we judged them, in part, for comfort while wearing headsets. While some brands— including the Oakley M-Frame wrap design— offered exceptional comfort, none were immune to eventual discomfort after hours of headset and temple clamping.

But the adjustable webbing on the Flying Eyes gently wraps around your head and under the tops of your ears. We found the strap to be soft and comfortable. We expected the strap to tug at our hair, but that wasn’t the case. Instead, the strap held the glasses securely on our face without sliding down the nose like traditional glasses do—especially when the face gets sweaty. Speaking of slides, we tested the glasses for ruggedness by accidentally sitting on them as we slid into the seat. They survived this, as well as a slide off the cowling and a drop onto the pavement without damage.

We were impressed with the performance of the non-polarized, shatter-resistant and scratch-resistant polycarbonate lenses. They complemented the crisp color displays in the Cirrus cockpit and helped to cut glare when the sun reflected from the glass. In fact, the lenses provide UV400 protection—the highest UV protection that’s available. The lenses are a neutral gray color that we found a bit too dark when the sky and cabin darkened. We think these glasses could be more versatile if they were offered with interchangeable lenses.

Speaking of versatile, the glasses come with traditional temples that are easily converted simply by pressing release tabs on the straps and sliding the temples in place. Selling for $199 but initially discounted at $179, the Flying Eyes sunglasses are the result of company founder Dean Siracusa’s frustration with the lack of comfort in his own flying missions. He’s convinced his new templeless design is the ticket to increased comfort without sacrificing performance or breaking the bank. Based on our testing, we agree.