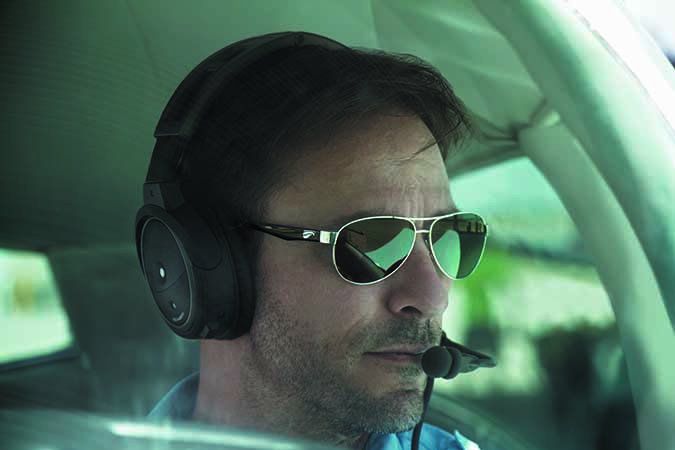 If you’ve recently invested in name-brand prescription sunglasses, you know how easy it is to tally an invoice well north of $500. That’s what I was ready to do a couple of years ago, but instead decided to install prescription lenses in the Flying Eyes Hawk glasses we originally reviewed in the October 2012 issue of Aviation Consumer.

The problem I’ve always had with the Hawk glasses is styling—you won’t win any modeling contracts with these utilitarian frames. This might not matter for action sports and flying missions, but they don’t exactly complement business attire. The company’s new ComfortStyle line changes all that. More in a minute.

After a $75 trip to my optometrist for some measurements, I sent the Hawks back to Cedar Park, Texas-based Flying Eyes to be fitted with my prescription. The lenses are made by Shamir Optical Industry and fabricated through Digital Eye Lab. My order was turned in less than one week.

I sprung for the transition lenses, which kicked the utility up several notches. On long flying days, they are often on my face during the dark drive home with me forgetting I’m even wearing them. I also wear the glasses inside of a full-face motorcycle helmet and in doing so, trashed them the first time out. The glasses are fitted with extremely thin temples (plus an interchangeable cinch strap) to increase comfort while wearing a headset, but it doesn’t tightly secure them to the head. With the face shield up (my bad), a gust of wind sucked them out of the helmet where they survived the impact with the pavement, but not the weight of a speeding six-wheel pickup. Flying Eyes offers a generous replacement/repair cost—$79 plus shipping. Destroy more than two pairs and the price jumps to $149, plus shipping. I had a replacement in a couple of days.

Other than the run-in with the truck, I can’t seem to break or scratch these things—and I’m not gentle. I sit on them, drop them from the wing of the airplane, stuff them (unprotected) in a full backpack, wear them in salt water, ice them up while on a snowboard and use them at the shooting range, although I don’t want to find out if they’re bulletproof. With UV400 sun protection, I think they perform as well as my military-issued Oakley M Frame.

If you order a non-prescription model and don’t like them, the company has a 30-day return policy (with full refund, less shipping).

I’ve hammered company principal and pilot Dean Siracusa pretty hard about the mediocre styling thing, and he’s stood by his promise to add more frames, without compromising durability. I’ve been wearing the new Golden Eagle and it seems tough.

The new ComfortStyle line, which includes $39 reader frames, plus a variety of models including the Kestrel Titanium Aviator, Golden Eagle sport wrap and other trendy designs, should appeal to both male and female pilots.

The new frames, which start at $96, are shatter and scratch resistant, plus they are available with optional polarization, which I suggest you avoid for cockpit use. The original Hawk model remains in the lineup and starts at $336 when fitted with a prescription. To see the new line, visit Flying Eyes.