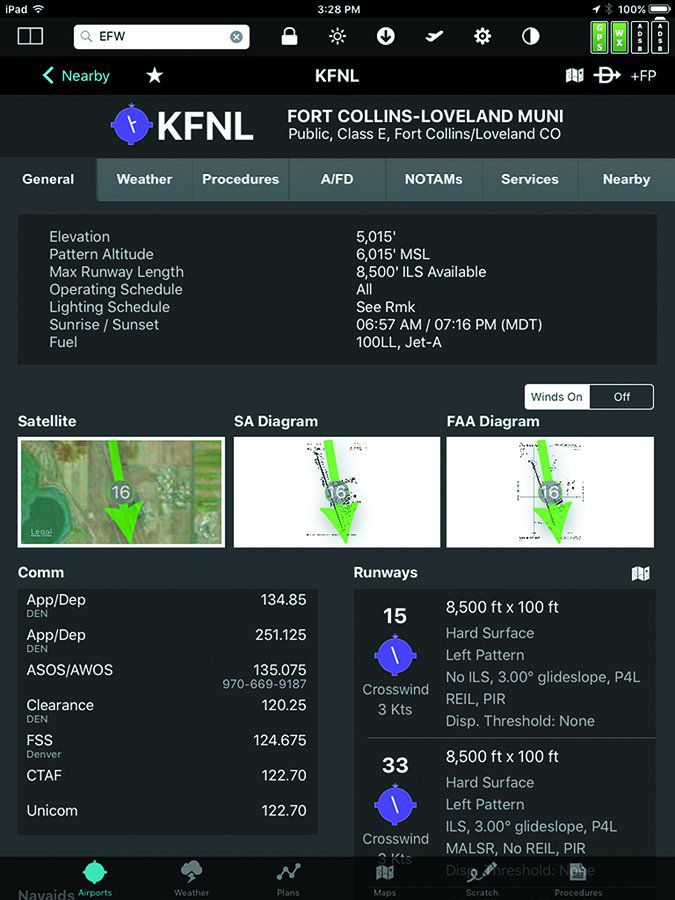 Since taking back full control of its FlyQ EFB (electronic flight bag) from AOPA a few years ago, Seattle Avionics has continued to improve the iPad-based app while keeping true to its declared focus on ease of use and making life safer for pilots.

FlyQ has been characterized by a design that maximizes screen space for maps, buttons that are large enough to hit on the first try, easily readable fonts, color-coding for alerts that minimize distractions and a touchscreen set up with turbulence in mind. The recently released Version 2.2 provides, among other new features, a three-times faster mapping engine, new base maps and over 4600 Seattle Avionics-devised airport diagrams for airports that do not currently have FAA diagrams.

In addition to the standard maps one expects on an EFB—sectionals, IFR low and IFR high charts—FlyQ 2.2 introduces a terrain map, high-resolution road map—with road names—and an aerial photography layer with high-resolution images. FlyQ continues its “Rule of Two” with its access to the new mapping layers: There is never more than one or two taps of the screen needed to get to information the pilot needs.

When the user pulls up an airport on FlyQ the first page reveals substantial information about the airport and presents three aerial views of the airport: a satellite image, the FAA diagram and the new SA (Seattle Avionics) diagram. According to Seattle Avionics’ Steve Podrachik, the FAA only publishes some 700 airport diagrams, and those have limited information regarding the location of operators and services on an airport.

Seattle Avionics has developed nearly 4700 new airport diagrams that not only have runway, taxiway, ramp and building locations, they include the names and locations of the FBOs, fuel facilities and other operators on the airport. I spent some time looking through a random collection of the diagrams and I liked what I saw. I kept thinking about the times I’d guessed wrong about where to go on an airport, only found out after I’d shut down and then had to hot-start a recalcitrant engine to taxi to the right place.

Podrachik said that FlyQ is actively seeking feedback on the accuracy of the SA diagrams. When an airport is displayed the user has the ability to submit feedback via the app.

I like a longtime feature of the airport diagrams and satellite images on FlyQ: A wind arrow is superimposed over the airport, making runway selection easy. The only thing I dislike is that the arrow is backward for wind indicators and airport wind tees—it points the direction the wind is going rather than from where it’s blowing. Lining up for landing in the direction the arrow is pointing means setting up for a downwind landing.

FlyQ supports more than 20 ADS-B systems. The new release adds the Dual XGPS 190 with AHRS and L-3 Lynx series, and now supports the AHRS unit in the Stratux.

While not a part of the new release, and despite the best efforts of FlyQ, the app has become less compatible with the Stratus ADS-B receiver line. Apparently the Appareo team does not want to sell new Stratus units to FlyQ users as it has installed firmware that now blocks FlyQ. I recognize that they want to push their ForeFlight app; however, it seems shortsighted to me. Garmin also blocks FlyQ from talking to its line of ADS-B receivers.

While FlyQ is an iPad tablet app, it has long synced with FlyQ Pocket for both iOS and Android smartphones. Another part of the new release allows it to sync with FlyQ Online on a Mac or PC. FlyQ Online allows a pilot to do flight planning on a computer then, without further action on the pilot’s part, the results are automatically synced to the pilot’s FlyQ EFB and FlyQ Pocket devices.

Podrachik explained that FlyQ Online is designed for in-depth flight planning to simplify the pilot’s life in the airplane when using the EFB. He said the company wants the “pilot flying the airplane, not the iPad.” Accordingly, there are a few features on FlyQ Online not on the EFB.

One new feature that struck me was that when looking at a potential destination airport or en route fuel stop, clicking on a fuel tab on the page brings up the fuel prices at that airport and ones surrounding it, in ascending order of price, simplifying the process of selecting a fuel stop when price is a consideration.

When working putting together a flight plan on any of the FlyQ platforms, there were little things that I appreciated. There’s no need to type in the “K” prior to an airport identifier; the flight plan defaults to a direct routing—if you prefer airways, just type in “V” after the identifiers for your departure point and destination and you can have the system automatically optimize the flight plan for the winds aloft and plan your fuel stops based on the cheapest fuel. If I don’t like the fuel stop, I just drag the line on the map over to the airport I prefer and the navlog that FlyQ has created is automatically updated. In addition, that flight plan is automatically available on the associated FlyQ EFB and FlyQ Pocket.

During our conversation Podrachik said that the company does not want FlyQ to be a standalone program—it should be able to work with other systems—as he described its new ability to accept flight plans from AOPA Flight Planner. After creating a flight plan on the AOPA platform the user emails it to him or herself. Upon opening the email on the iPad that has FlyQ installed, the user taps on the link provided and the iPad opens up FlyQ and displays the new flight plan. Dirt simple.

The most involved, and certainly the most specialized, portion of the new release is the search and rescue (SAR) feature. It was optimized through several months of work with the Civil Air Patrol and was developed for CAP volunteer pilots. However, in looking at it, it can be used by any pilot who needs to fly a grid-type pattern such as for aerial photography and environmental research and tracking projects.

Nine different SAR patterns are available including grid, parallel track and expanding square. As the user fills out the parameters of the desired search a preview window appears at the bottom of the screen, giving instant feedback as to whether the parameters make sense and will work. The pilot’s guide to FlyQ contains some 15 pages of detailed information on creating and using the SAR patterns.

The SAR pattern is overlaid on the map and works especially well with the new aerial photography base map rather than a sectional. Podrachik said that one of the reasons FlyQ added the aerial photography map layer was specifically to support SAR.

I’ve been long impressed with the simplicity of using the FlyQ EFB and not been at all surprised at its continued high ratings. The newest version makes a good thing better. The VFR app is $69.99, annually; the IFR version goes for $119.99. Download it at the Apple app store or get more information at FlyQ’s website.