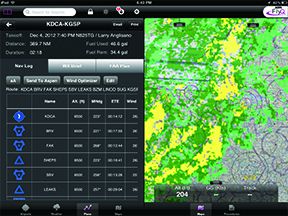 FlyQ EFB evolved from the AOPA member-freebie FlyQ flight planning resource for desktop and smartphones. We’ve always been fond of Seattle Avionics’ approach to flight planning and their design of well-thought-out apps for the Android market. Their handiwork continues with FlyQ EFB for iPad.

ESSENTIAL TABS
The app is intuitively built around five major menu tabs at the bottom of the screen and include airports, weather, flight plans, maps and procedures. There’s also a navigation bar at the top of the screen, which includes screen brightness controls, screen orientation lock, split-screen command key, airport search and download tool. Where some other apps have us wondering where to start, we found FlyQ EFB intuitive to navigate on the first try.

We switched to split-screen mode, which shows map and airport data, a map and an approach procedure, or two maps—maybe a VFR map and IFR map, side by side. FlyQ EFB excels at mapping, with user-selected, one-touch 2D and 3D Synthetic Vision mode. An optional portable AHARS input drives the virtual PFD, which we didn’t try.

Perhaps the most useful screen configuration is the display of flight plan on one screen and a variety of base maps with weather overlay on the other. But for now, weather is for preflight planning because airborne weather isn’t available on the first software release. This and a traffic input will be a player in the near future, we’re told.

Still, we think the FlyQ’s weather capabilities are excellent, with animated radar graphics, plus METARs and TAFs logically presented in the raw or in plain language.

Speaking of flight planning the weather, The Graphical Wind Optimizer functions shows what the winds are like relative to your current track and what kind of headwind or tailwind to expect, given your current course, at different altitudes. When building flight plans, the program can flight plan based on optimized winds, or not. It’s handy and intuitive at the same time, in our view.

CHOOSE YOUR PACKAGE
FlyQ is purchased in a VFR package for $69.99, with georeferenced sectionals and airport diagrams or the IFR package, for $119.99, which brings georeferenced approach procedures. These are easily accessed from the dedicated procedure tab at the bottom of the screen.

Seattle Avionics admits to a couple of program bugs in the initial release, and we experienced several crashes using the program on our first-generation iPad. You can download a 30-day free trial at www.aopa.org/flyq/tablet or on the Apple iStore.