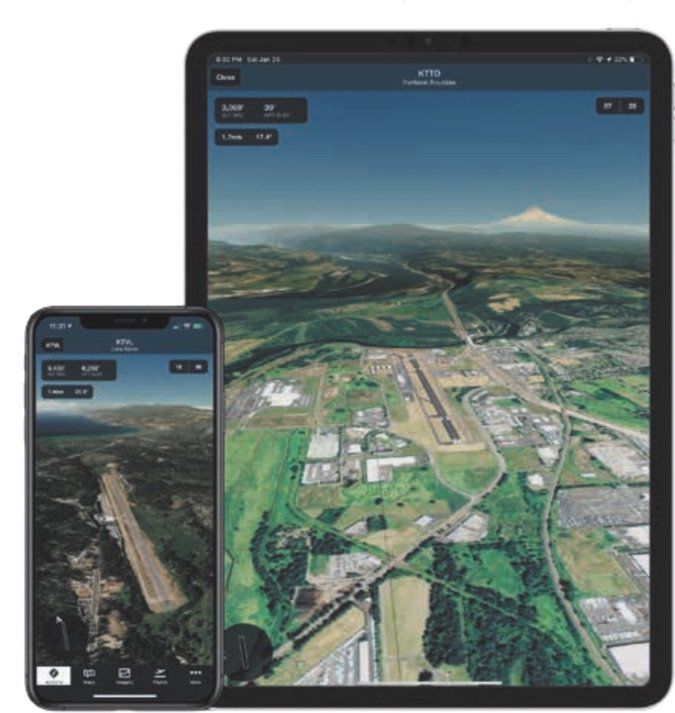 Studying the static images of an unfamiliar airport environment may be a good way to know what to expect before you get there. But ForeFlight takes the concept a couple of steps further with the new Airport 3D View high-res terrain and aerial imaging utility in its popular Mobile tablet and smartphone app.

Available in the app’s latest version 11 release, the new utility is standard in the Performance Plus and Business Performance subscription plans.

Version 11 also includes a new Breadcrumbs feature, which ForeFlight says can help in the training environment, particularly for helping master inflight maneuvers. Here’s a look at the new utilities.

ForeFlight’s 3D View is an interactive streaming preview of airports across the world. In other words, if the airport is in the ForeFlight database, there’s an associated photorealistic representation of the airport’s layout and the surrounding terrain. The idea is to visualize what the takeoff, landing and approach will look like ahead of time.

The utility is partly the result of ForeFlight’s partnership with Jeppesen, and the imagery uses Jeppesen-sourced high-resolution terrain covering every continent.

Think of the 3D View as a built-in camera, offering a near endless variety of vantage points that you can control by panning and zooming on the screen. You can pan and zoom 360 degrees around the airport and up to 15 miles away from it, while tilting the virtual camera from 3- to 89-degree viewing angles. This means you can eyeball the runway approach path or look nearly directly down on the airport.

The Glideslope Preview feature allows you to select a runway to get the view from short final because it automatically places the camera along the published glideslope. The real-world advantage here is obviously knowing what terrain and obstacles are in the way as you depart, land or go missed.

Airport 3D View is accessed by tapping a dedicated 3D View button on the airport’s data page, or on the airport’s pop-up on Maps. Overall, we think ForeFlight got the 3D feature right with an intuitive feature set. For example, there are selectable runway buttons in the upper right of the screen that allow you to visualize straight-in approaches by automatically positioning the camera 1 NM from the runway threshold along the published glideslope (or at an inclination of 6 degrees if no glideslope information is available).

Then you use a single finger to pan the view around and two fingers to pinch-zoom to extend the view out up to 15 nautical miles from the airport. A data readout in the upper left corner of the view provides information about the runway and current camera elevation, and the distance and angle of the camera from the end of the selected runway. The program allows you to zoom in or out without rotating the camera to get a view of the runway at any point along the glideslope. Want to know what the environment looks like at the missed approach point? Zoom to it for a look-see.

In the top left of the view is a data readout that offers information on the camera’s current position, including the altitude, distance from the pivot point and the inclination, in degrees. It also displays the airport’s elevation. In the lower left of the screen there’s a compass and basic map of the airfield.

When you select a runway, the utility automatically places the camera’s pivot point at the end of the it, allowing you to rotate the camera around the pivot point. Tapping the runway button again returns the camera to the default position.

When airport METAR data is available, you’ll see a windsock icon over the selected runway icon in the lower left.

The aerial imagery can be accessed in flight by using ForeFlight’s Pack feature before takeoff because the program saves the departure and destination airport imagery in cached memory the first time you view it for a given airport. It also saves imagery for other airports along your route. Of course, you’ll need an internet connection to initially cache the data.

The new Breadcrumbs feature in ForeFlight version 11 (it’s included in all subscription plans) is an extension of the app’s Track Log utility. In a nutshell, it allows you to see the aircraft’s track log as it’s being recorded. Breadcrumbs leaves a continuous onscreen line that you might reference for perfecting maneuvers, use for search and rescue efforts and even employ as an aid for aerial surveying work.

Since the Breadcrumbs feature can clutter the screen (especially on a smaller Apple smartphone) you can enable and disable it toward the bottom of the Map Settings menu. But even if Breadcrumbs is turned off, it won’t affect the app’s track log recording function.

The app begins drawing the Breadcrumbs trail on the takeoff roll and stops drawing when you land, and the Breadcrumbs remain on the map display for up to 30 minutes after landing. The idea is to give you time to review them in a post-flight briefing with an instructor, as one example.

The Breadcrumbs trail itself is interactive because you can tap on it to see information about it. This includes the total recorded time, the distance traveled and also the average groundspeed.

If you want to clear the current Breadcrumbs track (useful if you’re practicing multiple maneuvers), simply tap the Reset button on the bottom of the Breadcrumbs pop-up menu. When you do, the Breadcrumbs will begin redrawing from your current position on the map page. You can also tap the Save As Track Log button to not only remove the data from the screen, but to save it for reviewing it at a later time, and also to export the flight data. And even if you save smaller portions of the track log, the app will still capture the entire flight for review and export.

A base subscription to ForeFlight starts with the $99 per-year Basic Plus package and includes VFR and IFR charting, app- and web-based flight planning, data-driven aeronautical maps, graphical briefings and aviation weather data.

For more on these subscriptions and to download a pilot’s guide for the latest version 11 program, visit www.foreflight.com.