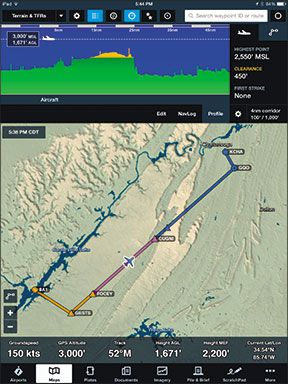 Feed the machine. That’s what app maker ForeFlight needs to do to maintain its 75 percent share (by its own estimation) of the GA cockpit app market. ForeFlight’s popularity creates a tremendous task of adding new features and improvements on a regular basis because the nature of the app market is such that the more features you add, the more users will demand. There’s also stiff competition from other companies, including Hilton Software with its WingX Pro 7 app, and Garmin, with its Pilot app, to name a couple. There’s also a growing Android market. It’s a vicious cycle that we think is spinning out of control, but that’s a different matter.

What does matter is ForeFlight’s obvious commitment to improving and advancing its Mobile app while answering the demand for features that were seemingly missing from previous versions of the app, including advanced terrain mapping and better file and brief functionality through Lockheed Martin. It also wisely invested in its own cartography and produces airport diagrams. As the industry worries about increasing data costs, this independence is encouraging. Here’s an overview of the major enhancements available in the latest version 6.1.

Packing for your flight
If you’ve ever been enroute to a destination and had some extra fuel to fly further than you planned, but didn’t download the charts and other data needed before you took off, the new Pack function (as in packing for the flight) solves the dilemma. Tapping the Pack button analyzes your route of flight and determines which charts, airport information, NOTAMs, weather data and procedures you’ll need to make the flight before you even take off.

For example, if you’re planning a flight from Trenton, New Jersey, to Greenville, South Carolina, enter the route and tap the new suitcase icon that’s in the route editor page. Pack analyzes the planned data against the data you’ve already downloaded and prompts you to download the remaining data you’ll need for off-line, inflight access. A red exclamation icon over the suitcase warns that you need to pack before your trip. There’s also a feature for turning autocheck on (automatically starting the analysis process) or off.

If you’re not sure you’re going to stop in Charlotte, North Carolina, on the way to the planned Greenville airport, for example, any modification you experiment with by modifying the route will prompt the Pack function to analyze the needed data to get there.

If you’re concerned about the size of the files and overall storage capacity, you have the option of downloading all of the required data (tapping the Pack button) or by separate line item (approach chart, enroute chart, etc.) by tapping each line item on the page. We like that each line item is labeled with a file size so you can keep tabs on the amount of data you’re loading to the iPad.

Speaking of charts, ForeFlight’s charting enabled it to release airport diagrams for airports that aren’t supported by the FAA. This includes georeferenced diagrams for nearly 1500 United States airports and 200 airports in Canada.

Stratus REPLAY
If you’re considering the $899 Appareo Stratus 2 portable WiFi ADS-B receiver, ForeFlight Mobile is the primary compatible app—that’s only compatible with the iPad—and will display air-to-air, ADS-R and TIS-B traffic and FIS-B textual and graphical weather products. The ForeFlight/Stratus interface has been a popular combination that ForeFlight continues to enhance. The new version of the app brings the Stratus/ForeFlight interface to a higher level.

For instance, the new Stratus Replay function enables the Stratus receiver to store 30 minutes of FIS-B weather data in its onboard memory. Initially, we weren’t sure what logistical value this brings to the interface, but we can see a useful advantage.

If you use your iPad for retrieving and displaying in-flight ADS-B weather data, you’ll know that hopping between apps or sleeping the iPad creates a situation where you can miss some of the weather (and traffic) data. There’s also the cumbersome and time-consuming task of refreshing the data once the iPad wakes up or once you get back into the ForeFlight app.

But the real advantage is the ability to capture, store and analyze 30 minutes of animated ADS-B weather radar within the app. According to ForeFlight’s Tyson Weihs, Replay solves more than one problem.

“Most ADS-B receivers simply receive the FIS-B weather stream and immediately blast it across the WiFi to the listening tablet computer. If the tablet is asleep or if the app isn’t running, the stream is missed. Now, you’ll always get the data, even if the iPad is asleep,” he said.

This means that in a situation where the iPad was running low on battery power, you could still fetch reasonable amounts of missed weather from the Stratus even after a power-conserving shutdown.
If there is more than one iPad connected to the Stratus, the receiver will intelligently negotiate the re-transmission to each listening iPad. This allows each unit to replay the same data.

As it has in the past, the Stratus 2 interface also enables a full or split-screen AHRS interface. This feature isn’t available on first-gen Stratus receivers. As we go to press, ForeFlight is in the process of advancing the AHRS interface even further.

Filing and briefing
ForeFlight now uses Lockheed Martin as the primary flight planning gateway. ForeFlight acknowledges that the disconnect between DUATS and Flight Service was a big source of frustration for users not aware of its idiosyncrasies. ForeFlight added ICAO planning support and the ability to activate and close a VFR flight plan with a push of a button, in addition to amending or unfiling flight plans. The app also uses Lockheed Martin textual briefings.

Our home base at Brainard Airport in Connecticut, is across the river from the UConn college football stadium and we’ve lost count of the times that a hot stadium TFR wasn’t mentioned on any preflight briefing. It’s generally not until a helpful tower controller mentions it before departure that pilots are aware of it. ForeFlight has a dynamic stadium TFR system that, according to ForeFlight, shows more accurate stadium TFR depictions. It also expanded its charting coverage, adding IFR planning charts, enroute charts for the Caribbean and Mexico, oceanic planning charts and worldwide Department of Defense terminal and enroute procedures. There’s also an improved FBO directory called ForeFlight Directory. It has information on expanded ground service and FBO information (rental cars, fuel brands and prices), in addition to photos and user comments.

A one-year ForeFlight Mobile subscription is $74.99, while ForeFlight Pro, which adds TrueTaxi and TruePlates for the United States is $149.99 per year. Visit www.foreflight.com or download a trial from the iTunes store.