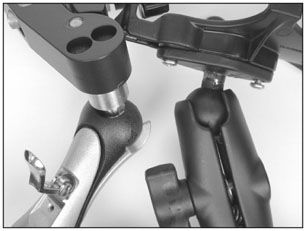 Sometime during the short but glorious history of general aviation gadgets, the notion that mounting some sort of accessory on the control yoke became accepted as a good idea. It wasnt, it isnt and it never will be. Festooning controls with wirebound junk is at best a nuisance, at worst a safety hazard in turbulence or a crash.

Still, yoke mounting is a popular place to put portable navigators so were struck with yoke mounts. But accessory designers have at least come up with more sensibly designed yoke mounts, so we decided to do quick sampling of the market.

None of these devices are perfect, at least the ones that mount on a yoke. They tend to obstruct instruments and give the yoke a heavier-than-normal feel thats far from ideal. But the better ones at least improve the way the portable gadget mounts into its cradle and how the entire assembly fastens to the yoke.

Another option are the suction cup mounts that allow you to stick the GPS on a side window or the windshield, braced against the glareshield. We tried a couple of those, too.

RAM Mounts
RAM has been at the portable gadget mount business for 10 years and has more variety and flexibility in this product realm than any other manufacturer we know of. While RAMs products arent without warts, they are so prolific that its possible to mount just about anything to anything with RAM parts, from a GPS to a yoke to a laptop to the dash of your pick-up truck.

The technical core of the product is a ball-and-socket design consisting of a hard rubber ball attached to a mounting plate or flange that in turn affixes in some way to the gadget you want to mount. The socket portion of this design is found in an arm device consisting of two metal halves held together with a bolt working against a spring. Tightening the bolt adjusts tension on the ball and allows the arm to swing through a range of positions.

RAMs claim to fame is that it has more than 900 parts and pieces and to put together a yoke or suction mount, you select from this menu la carte style. For our test project, RAM sent us mounting hardware for a Garmin GPSmap 296, both a yoke mount and a suction-cup mount. The yoke version retails for $52.28. (RAM part number B-121-GA7.)

The RAM design has a beefy C-clamp-type gripper for the yoke shaft nicely cast of aluminum in black finish. It will easily accommodate shafts of most sizes, although it might be a stretch for a Beech yoke. The cradle RAM provides fits the GPSmap 296 like a glove, with a positive, snap-in feel that holds the navigator securely. Its easy to remove and reinstall the gadget, a plus for the RAM system.

Were less impressed with RAMs flexibility in terms of mounting position. By loosening the plastic thumbnut, the arm can be positioned just about anywhere you want it but not really anywhere. Movement is somewhat restricted because the balls shaft jams against the end of the arm in certain positions. This is the RAM systems major drawback and makes the yoke mount frustrating to use at times.

RAM Suction
One way to avoid the nuisance of a yoke mount is to not have one. RAMs alterative is a suction-cup base mount that attaches to a side window or the inside of the windshield. Like the yoke clamp, the suction cup base has a ball to which an arm with its socket attaches. The gadget cradle fits into the other end of the arm, as with the yoke mount. The version we tried-RAM B-166-GA7-retails for $41.37.

Last time we tested the RAM suction mount, we heard reader complaints that the cup simply didnt grip well enough and would pop off the glass surface.RAM has since redesigned the cup with a clever rotating locking ring that draws up the cups vacuum. With a spring scale, we found that it took 22 pounds of side pull to dislodge the suction cup and tugging at it straight out from the cup, we stopped pulling at 45 pounds. In short, the cup shouldnt pop off, even in turbulence. In fact, getting it off the glass can be a chore but the cup has a small lift tab to break the suction.

We prefer the suction cup option to the yoke-mount option because it can attach to side windows or the windshield in any aircraft. The downside, however, is safety. During takeoff and landing or when encountering turbulence, we would recommend removing the mount to keep it from becoming a dangerous projectile. See www.ram-mount.com for ordering information.

VersaTrue Yoke
A relative newcomer to the gadget mount business is VersaTrue Mounting Systems, which offers a product line similar to but less extensive than RAMs. Its also based on a ball-and-socket principle but there are some definite differences between the two systems, mainly in the arm design.

Where RAM tensions the grip on the ball with a bolt/ thumbnut and spring, VersaTrue has a small over-center lever to set the tension. Rotating the lever adjusts the tension and snapping it down locks the socket arm on both balls. VersaTrues better idea is that the arm sockets have semi-circular cutouts which promote more flexibility in positioning than the RAM system has. This also means that when the tensioning lever is released, the ball occasionally pops out of the socket. Careful adjustment will minimize this.

Where RAM has a dedicated gadget mount, VersaTrue has a universal mount with ratcheting arms. This is a mixed blessing; it accommodates more gadgets easily but doesnt hold the device as firmly, in our view. Price of the VersaTrue product we tested was $102.97. See www.versatrue.com for more.

Honorable Mention
Two other mounts we tested include the Lobstermount and a universal yoke mount sold by Wentworth Aircraft. Like VersaTrue, the Lobstermount-$81.89 for the model we tried-uses a ball-and-socket approach but rather than a socket arm, the mount has an arm similar to a pair of vice-grip pliers with the same type of locking mechanism. And like VersaTrue, the Lobstermount has a universal gadget mount with plastic spring arms that slide in slots milled into a plastic base. The mount will accept a range of gadgets, but compared to the other mounts, we thought its grip on the GPSmap 296 was somewhat tenuous.

We tried the Lobstermount with a suction cup similar to the RAM system.The cup easily resisted more than 30 pounds of side pull but we found that because of the arm length and cup design, the mount had more wobble and flex than we prefer. Once locked, the RAM mount is rock solid, by comparison. For more on the Lobstermount, contact www.aeromedix.com or www.lobstermount.com.

At Oshkosh, we saw an intriguing yoke mount being offered by a used aircraft parts house, Wentworth Aircraft, Inc. (www.wentworthaircraft.com) Wentworth bought a bunch of mounts from an accessory company that went bust and is selling them as universal gadget mounts for the yoke.

The mount is a simple flat-plate on a pivot with a yoke clamp. Youre on your own to fasten the gadget to it with Velcro or some other means. At $30, this mount is cheap and probably perfect for a PDA or GPS with a flat back. The Velcro method didnt work well with the GPSmap 296s convex backside, however.

Conclusion
Top dog here is the RAM system, in our view. While the VersaTrue products have a nicer fit and finish and a bit more flexibility in range of motion, they arent exactly perfect. The universal gadget mount is a good idea but doesnt hold the device as securely as the RAM mounts do and the arm tension is a bit finicky to get just right.

But where RAM excels is in value. The VersaTrue system costs twice as much as the equivalent RAM solution but, in our view, it isnt twice as good. In this group of products, for under $50, the RAM suction cup hardware strikes us as an outstanding value and you can use it in the airplane or the car, offering utility a simple yoke mount cant match.

Also With This Article
“Portables as Panel Mounts”