Garmin’s launch of the new aera 760 portable navigator couldn’t have come at a worse time. Historically, Sun ‘n Fun and AirVenture have been the ideal backdrop for new Garmin gadget intros, but with both shows canceled, the company can’t generate the usual airshow buzz to get the marketing momentum going. But does the tablet-saturated market even want another portable GPS? We think it might, especially for semi-portable installations in stark panels—a role Garmin portables have successfully served for years. 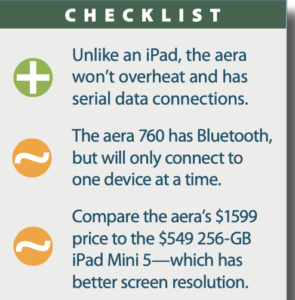 A follow-on to the aera 660 portable released four years ago, the new Garmin 760 is priced at $1599—almost three times more than a flagship tablet—and has both a wired and wireless interface that makes it compatible with Garmin portable and panel-mounted avionics, including autopilots. We got our hands on the new aera and prepared this report and a video chaser.

With a display size of 7.0 inches diagonal the aera 760 chassis measures 7.2 inches wide by 4.85 inches high. It’s no lightweight at just shy of 20 ounces. Check that against the smallest current Apple iPad mini that’s 8.0 inches wide by 5.3 inches high and weighs 10.5 ounces. Its screen size is 7.9 inches.

The old Garmin aera 660 is a smaller unit, at 5.5 inches wide and 3.4 inches high, so if you have one in a panel-mount configuration and want to upgrade for the larger screen, the new 760 won’t be compatible without a hardware change. We talked with AirGizmos, the company that makes Panel Dock mounting hardware for portables, and it told us to expect a compatible dock for the aera 760 sometime this fall.

The new aera has a capacitive touchscreen that can be viewed in portrait or landscape mode. We tried the unit in a yoke mount and also surface mounted on the instrument panel with a RAM Ball mount and found it to be just the right size, kind of like an iPad Mini. But as for screen resolution, the latest iPad has it beat. The aera’s WVGA color TFT screen resolution is 580 by 800 pixels. Check that against the iPad Mini 5’s resolution at 2048 by 1536.

The aera 760 has a rechargeable lithium-ion battery with a USB-C power input, and we suggest connecting the device to external power. If you don’t, expect the battery to last around four hours at an 80 percent backlight setting, which isn’t bad.

Because the aera 760 has built-in Wi-Fi, it can work well as a preflighting tool. After all, Garmin tried to design the unit more like a tablet computer than a portable GPS and it has some built-in utility to serve the role. With a Wi-Fi connection you can do database updates, look at weather and fuel prices, calculate weight and balance reports and load and view a PDF document with an SD memory card. There’s also the AOPA Airport Directory as standard.

It comes preloaded (and Wi-Fi updatable) with VFR sectionals, IFR low, high and helicopter enroute charts, plus georeferenced approach plates. (Garmin FliteCharts are standard and Jeppesen charts are optional.) On the main map you can select either VFR or IFR charts for overlay, or you can simply view a chart without overlaying it.

If you’ve used the Garmin Pilot app for iPad and Android, the feature set in the aera 760 will be extremely familiar, sporting many of the same icons and menu structure. The navigator is good for tactical on-the-fly planning with built-in victor airways, and user-defined holding patterns and holds over fixes can be inserted in a flight plan.

In the cockpit, the WAAS/GLONASS receiver is the best we’ve used in any portable. The engine supports the aera’s 3D Vision, which is a three-dimensional view of terrain and topographical features as seen from the outside of the aircraft. The unit calculates these graphics from the internal terrain and obstacle database and the aircraft’s three-dimensional GPS position. You can touch and drag on the three-dimensional map page view (and use the Zoom In and Zoom Out touch icons) to change the perspective. The unit has audio and visual alerting (including an Obstacles/Terrain pop-up window) to keep you in the bubble when cruising around terrain. Lose the GPS signal and of course you’ll lose the 3D function, but the receiver worked so reliably in our evaluation, we can’t see it being an issue.

We were pleased to see a comprehensive list of IFR procedures in the aera 760’s database, including arrivals (STARs), approaches, departure procedures (DPs) and even missed approach procedures. One of each can be added to the active flight plan and can’t legally be used for primary navigation, of course, but if you had to use them to get the aircraft on the ground the aera is up to the task. There’s also visual approach guidance to most airports in the database. To load an approach, tap the Active Flight Plan icon and then Menu to view a list of flight plan options. You’ll find ILS, RNAV and visual approaches with the option to load and activate with vectors-to-final or waypoint guidance to the FAF. The utility has a good split-screen preview function so you can look at approach waypoint sequencing and see the selected procedure overlaid on the map. From the Menu icon you can also view the appropriate chart, the current weather (based on whatever external source is feeding the data), runways, frequencies and facility info for the loaded airport. In all, the aera 760’s navigation capability is useful and easy to program.

As we’d expect, the aera 760 works well as a weather display, and aside from subscription-free, Wi-Fi-delivered internet weather provided by Garmin Weather Data Services, the unit is compatible with ADS-B FIS-B and SiriusXM satellite broadcast products sourced from external receivers. When the device senses the presence of these receivers (either wireless or Bluetooth) the Weather page offers the choice of selecting which you want use, and it’s universally applied to the weather data that’s overlaid on the Map, Waypoint, Weather and Nearest pages. Despite the aera’s ability to connect via Bluetooth or an RS-232 wired serial connection, some products—including FIS-B Cloud Tops Forecasts, Lightning, Turbulence and Icing—only work with a Bluetooth connection.

There’s also a comprehensive traffic interface and there’s a long list of compatible Garmin devices for connection. This includes the GDL 39/39R/393D, GDL 50/50R-series portable receivers, the GNX 375 ADS-B transponder-equipped navigator and the GTX 345/345R ADS-B transponders—all of which have wireless Bluetooth. Wired interfaces are connected with an optional power/data interface cable. The aera 760’s traffic alerting and onscreen symbology potential rivals the most advanced panel-mounted interfaces and includes Garmin’s TargetTrend look-ahead surveillance utility indicating the threat aircraft’s flight path and position. Traffic can be displayed on a dedicated page and overlaid over the map displays and charts, including Garmin’s SafeTaxi interactive surface charts.

Aera 760 Feature Set At A Glance 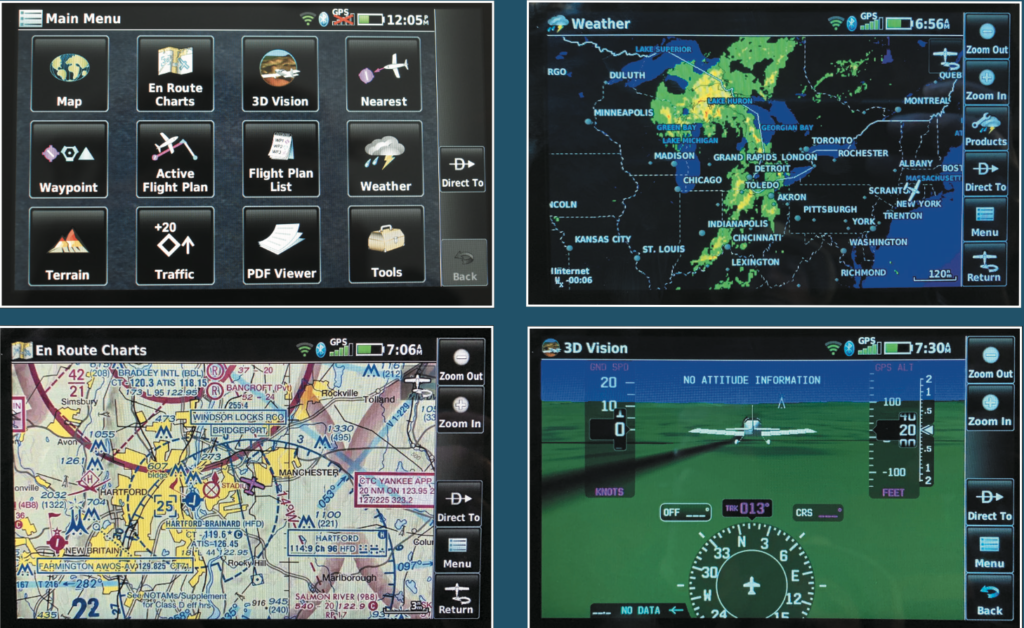 Moving clockwise from the upper left image: If you’re familiar with the Garmin Pilot tablet app and even one of Garmin’s latest panel navigators, you’ll be right at home icon-surfing the aera 760. The device has plenty of interface potential for displaying internet, satellite broadcast and ADS-B FIS-B weather data, plus the processor seemed to keep up with heavy graphics. The 3D Vision, which mimics the view from outside the aircraft, is clever, but the attitude display option is more useful. The aera 760 excels at charting capability, with the ability to overlay lots of external data. Last, we’re impressed with the unit’s rugged build quality. Unlike a tablet, drop it off a wing and it will likely survive.

In our estimation, that could be one of the main reasons for investing the $1600 for the aera 760, especially in experimentals and LSAs, where there are no regulatory limits for interfacing portable and panel-mounted gear. This includes connecting to autopilots—including Garmin’s GFC 500 digital system and the one that’s integrated in the Garmin G3X Touch suite. When interfaced, the aera provides lateral and vertical commands to the autopilot.

There’s a straightforward Interface Setup submenu in the device where you can configure the two RS-232 serial ports and their data format. There are plenty of combinations, including the proprietary Garmin Aviation In, a 4800- and 9600-baud NMEA output, GTX transponder TIS-A In, MapMX and the 57,600-baud Garmin Connext setting.

The aera 760 also has a frequency search and transfer interface when it’s wired with Garmin’s GTR 200, GTR 225 and GNC 255 VHF nav and comm radios. Got a Garmin VIRB action cam? You can control it with the aera 760 by Bluetooth.

Only time will tell how many buyers there are for the new aera, and only you can decide if it’s worth it over  (or in addition to) a tablet running Garmin Pilot—an app that’s tightly modeled around the aera 760’s feature set. In our opinion this unit might be a tough sell for some tablet users. The latest Apple (and even Android) tablets clobber the 760 on graphics quality, price and versatility.

Still, we look beyond the tablet. The aera 760 is plenty capable to serve as a decent panel display, and we expect to see it dock-mounted in new LSA panels and connected to autopilots. Plus, when iPad overheating and vibration is a concern, the aera 760 easily wins for better reliability.