Garmin has saturated the market with a long list of sports watches and the latest platform to serve double duty as a smart/ aviator watch is the D2 Air. Priced at $499, we think the Air is a welcome addition to the D2 series watch line. It has a lower profile and straightforward feature set, plus it reduces awkward bezel buttons from five to two in favor of a touchscreen.

We’ve been beta testing the new D2 Air and have grown to appreciate its simplicity, its ability to work well as a fitness tracker and that it has just enough wrist-based aviation data for preflight planning. Here’s a field report. 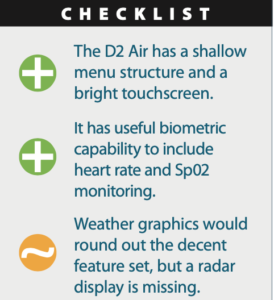 The D2 Air trickles down from the Garmin Venu sports watch and its 43.2 by 43.2 by 12.4-mm stature is notably smaller than the $1249 D2 Delta PX, which is Garmin’s flagship aviator’s watch that will remain in the lineup. The D2 Air is also lighter (46.3 grams) thanks to its fiber-reinforced polymer chassis. The Air’s 1.2-inch AMOLED touchscreen display has a 390 by 390 pixel count and is notably brighter than the display on the 86-gram D2 Delta PX, which has a 240 by 240 pixel count on the same-sized screen.

Garmin’s D2 PX watch has proven to be a rugged device, and the D2 Air promises to follow suit with a scratch- and damage-resistant Corning Gorilla Glass 3 lens, a stainless steel-finished face and a premium leather strap. Also included as standard is a quick-release silicone sport band, and Garmin offers other styles of bands as an option.

Speaking of styling, if you’re after a Top Gun-like appearance the D2 Air won’t do it for you. It looks like a dressed-up Venu smartwatch, and for that we give the more handsome D2 Delta PX Titanium the edge.

An important part of the D2 Air’s feature set is the Garmin Connect app, which links up via the watch’s internal Bluetooth. The Connect program (compatible with iOS and Android) is the primary platform that works with Garmin’s smartwatches, fitness trackers and cycling computers and it’s where you view and log sports and biometric data. The watch also connects with the Garmin Pilot app for one-way (app to the watch) flight plan transfer, as well as the logbook functions within the flyGarmin.com web-based utility.

If you’ve used previous Garmin D2 aviator watches the new Air will be different and we think that’s a good thing. Because many of the tasks are accomplished with touchscreen, there are only two bezel buttons and that really simplifies things. Hold the Action button in the upper right corner to power the device on and to access the Controls menu (for things like locking the screen, setting screen brightness and executing a direct-to command, as a few examples). A single press of the button enables the selection of a long list of activities—including aviation, cycling, running, snowboarding, yoga and just about any popular (and not so popular) fitness sport you can think of. Remember, the D2 Air really started life as a sports/fitness watch, and it retains those functions, along with aviation features. The lower right bezel button is for jumping back to the previous screen. Swipe up or down on the touchscreen to scroll through widgets, features and menus. The menu structure is refreshingly shallow and it’s nearly impossible to get lost—something we struggle with when using the D2 PX. But we have some minor nits.

To save battery power (it runs for up to five days using it as a smartwatch and up to 10 hours when using the built-in GPS), the display times out after 15 seconds. Tap the display twice or press the Back button to wake it up. We found this annoying, but it’s perhaps the price to pay for a bright display. To save battery power, the watch’s GPS engine isn’t always locked on, either. That means you’ll have to wait until is locks on before gaining access to any nav or position functions. If the watch doesn’t have a clear shot of the sky, that could take a bit.

As you would expect, battery life depends on screen brightness and there are three main brightness settings to choose from, in addition to two night flight modes (low and high).

While you can highly customize the watch face, the default face is aviation focused. In addition to a time and date window, you have full-time access to weather conditions at a selected or favorite (permanently set) airport. This includes temperature, cloud coverage and visibility, plus wind conditions. We found that this default main watch face was an easy way to keep tabs on changing weather conditions without having to fire up an app to look for it. There’s also a small yellow UTC pointer, which references the 24-hour time markings on the watch face.

The Air comes preloaded with a built-in worldwide database with navaids (including intersections), and you can display airport information including runway orientation with wind components, runway lengths, airport frequencies and traffic pattern altitudes. The watch shows pressure altitude and you can set the current barometric pressure manually or to the pressure at a favorite airport.

A “flying activity” starts automatically when your detected climb rate exceeds the value set in the Auto Fly settings of the watch, or you can select the Fly widget and press the upper bezel key to begin a direct-to navigation command, which starts the flight timer and gets you on your way. Speaking of timers, there’s also a fuel tank reminder where you set an alarm to sound and display a message to check the fuel.

Navigating to the nearest airport couldn’t be easier and to do that, hold the upper bezel key and select the direct-to icon and then Nearest. There’s plenty of information displayed for the nearest airport—from the field’s name, its identifier, the bearing to it and of course its distance from your present position. We’re not sure how many pilots will actually use this (or any watch) for inflight navigation, although there could be some decent utility in stark gliders and ultralights to name two. And when you do, the horizontal situation indicator (HSI) screen (based on GPS track) is the best way to stay on course. In addition to a CDI, a To/From indicator and estimated time enroute, there’s a course deviation distance display with dots indicating your distance off course.

To find and navigate to a waypoint by name, press the upper right key and select Navigate, Flight Planning and then Find Waypoint. You can search by identifier or select from a list of the nearest airports, navaids or intersections. The other way to navigate is by sending a flight plan from the Garmin Pilot app into the watch. In the Pilot app, select Home and then Flight Plan. Create the flight plan and then go into the Connext menu of the app and simply do a Send-To command to push the flight plan to the watch.

One feature that makes good sense is the altitude alerter and you can set an alarm to vibrate your wrist when you reach a specified altitude. As with its D2 PX, Garmin makes it clear that the pulse oximeter function is intended for backup only since it’s wrist based and not as accurate as a traditional finger pulse-ox device. Still, it’s better than nothing and we found it reasonably accurate, as was the heart rate measuring.

To view your SpO2 in flight, start a Fly activity, simply swipe up or down through the data screens and you’ll see your most recent oxygen saturation percentage. Stay extremely still for up to 30 seconds to get a reading, which isn’t as easy as it might seem. You can set a low-oxygen alert and the watch will vibrate when you reach the low-oxygen altitude.

That’s how we describe the new D2 Air, and although you might not use it for cockpit navigation, we think it offers just the right amount of utilities for preflight planning and general awareness within the aviation environment. We like the built-in pulse oximeter and the Air’s ability to connect with external Garmin sensors for cycling.

Moreover, this is a smartwatch that’s worthy for everyday wear. Its reliable Bluetooth connection (there’s also Wi-Fi) with the smartphone means you can get full-time phone notifications including incoming calls (it doesn’t have voice capabilities), text messages and alerts. Perhaps what we like best is its broad range of health and awareness tracking via the Garmin Connect app—everything from sleep patterns, stress tracking, hydration, the Body Battery energy function and heart-rate monitor. And yes, Garmin even has its own contactless payment service called Garmin Pay. We didn’t set it up.

Perhaps what would make the watch even better is onscreen weather graphics including radar, but you have to step up to the $1249 D2 Delta PX for that. At $499, the D2 Air is a significant savings and frankly we think it has a much more logical feature set. If you’re a pilot who is considering a new smartwatch, we think the D2 Air packs a solid punch at a fair price.