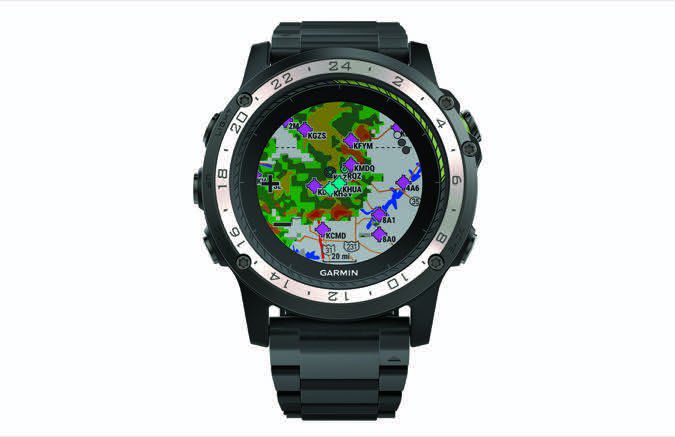 On the heels of our long-term report on Garmin’s D2 Bravo aviator watch (March 2017 Aviation Consumer), Garmin releases the next version of the watch—the D2 Charlie. Into the long-term test pool it goes for an upcoming cockpit smartwatch shootout article, but in the interim here is what’s new on the Charlie.

Weather On The Ground

Garmin is trying to get as much mileage as it can from its watches by trickling models down into the aviation division and the D2 Charlie is a derivative of the successful Fenix 5 multisport watch series. The Charlie improves features we always thought could be better in the old pilot watch, which include more useful map graphics. There’s still no touchscreen.

For us, the GPS-equipped D2 Bravo Titanium model (the new Charlie watch sits on the same Titanium chassis) proved better as a sports and biometric watch than a cockpit tool. Still, we use it to control Garmin’s VIRB Ultra30 action cam on the fly, which is useful in our work. The new Charlie quickly connects with it and Garmin’s new VIRB 360 camera—both at the same time. But you can do that through Garmin’s VIRB and Pilot apps, too. The real reason for an aviator smartwatch is for viewing no-fuss, at-a-glance data. Mapping wasn’t the best on the Bravo and Titanium, in our view.

But Garmin made it better on the Charlie by making it more detailed. It added bodies of water, highways, railways and more airports. The older Bravo’s mapping really is stark by comparison even though the new Charlie uses the same high-resolution color display with LED backlighting. Battery life is around 20 hours when using the GPS and up to 12 days as a smartwatch.

New to the Charlie is a weather utility that displays Nexrad radar. The older D2 only displayed METARs and TAFs. No, it doesn’t have a built-in weather receiver. It connects wirelessly to a tablet running Garmin’s Pilot and the Connect app, or directly to a smartphone or tablet that’s receiving cellular or internet data. This means it won’t display real-time weather data in flight unless you have a cellular connection, although it will cache the Nexrad you’ve downloaded on the ground. If you’re lucky, it will refresh if you descend into cell coverage. To access the local weather radar, press and hold the Direct-to and Down buttons. Pretty simple.

We’re surprised it won’t display ADS-B or SXM weather through any of the various Garmin receivers (GDL39 ADS-B receiver and the new GDL51/52 SXM weather and ADS-B receivers, for example) when they’re connected through Garmin Pilot. On the other hand, if you have a larger tablet display for showing the weather, we doubt the watch would have much utility as a cockpit weather display. But some might want it.

Like the older watches, the Charlie has Direct-to navigation, plus it overlays pilot-selectable navigation data fields over the map display should you want to navigate with it. It’s not the best primary navigator, in our experience, but it works. New to the Charlie is airport information including frequencies, runway length and surface info and reported weather.

Outside the cockpit, the ability to connect with multiple devices at the same time, including cycling computers, has always been a strong capability for the D2 series and the Charlie continues to be a worthy sports watch and activity tracker. Like the Bravo Titanium, the Charlie has the Garmin Elevate wrist heart rate sensor that’s slightly less accurate than a chest sensor. Other sport toolsets include golfing, swimming and skiing.

Two functions carried over from the Bravo and Titanium that we use are automatic flight logging (which is sent into the Garmin Pilot app’s logbook utility), and smart notifications, where the watch identifies incoming phone calls and displays texts and emails received from a connected smartphone.

The D2 Charlie is $799 and comes standard with a leather band, while the Titanium version (with a titanium band) is $999. Both come with a silicone sports band, and all attach using Garmin’s new QuickFit design—a big improvement over the old watch, in our view. Contact www.garmin.com.