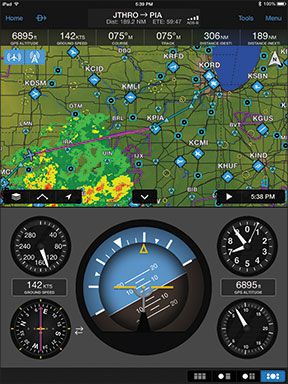 Garmin’s GDL39 portable ADS-B receiver is just one choice in a crowded market of capable low-cost solutions. In our view, the GDL39 has been shadowed by the competition because it lacked some of the advanced features that buyers might expect from a modern portable ADS-B receiver. For example, while other brands sport full AHRS functionality, the utilitarian GDL39 is stark, by comparison, offering little more than an integral Bluetooth GPS receiver.

The new $849 dual-frequency GDL39 3D—in conjunction with the updated Garmin Pilot tablet app—steps the unit up a notch, with a clever attitude indicator function. But it’s not the glass panel lookalike you might expect. Instead, Garmin keeps it simple with an old-school onscreen attitude indicator, plus other supporting round-gauge instruments. We think the presentation is refreshingly simple and effective.

Pilot tablet app
Garmin’s revised Pilot app (version 6.0 for iOS and version 2.8 for Android) is an integral part of the GDL39 3D feature set. One of the beefs we’ve had with the Pilot app pertains to its lacking flight planning options, something that’s enhanced with the new version.

When connected to a DUATs account, Pilot will retrieve a preflight weather briefing based on the parameters of the programmed active flight plan. A dedicated File and Brief tab allows the user to view the weather briefing for the route of flight. There’s also the option to file and cancel a flight plan. Other menus within the app follow the architectural lead of Garmin portable GPS units. If you’re familiar with any model in the Garmin aera series, the Pilot app should be easy to learn.

The new app also has a more modern appearance. According to Garmin, the app implements many of the design elements from Apple’s iOS 7. That new look also includes the ability to overlay functions from several remote devices in a split-screen view, including the GDL39 3D, Garmin’s VIRB Elite action camera and the D2 pilot watch.

The GDL39 3D connects to the tablet via Bluetooth and is managed in the Devices page. The integral AHRS function starts automatically during power-up and performs pitch and tilt leveling adjustments. While the unit doesn’t have to be perfectly level, it does have to be pointed toward the direction of flight.

The attitude indicator is displayed in the Pilot app split screen mode by selecting the Panel page. The same menu allows you to select charts, terrain, flight plan and SafeTaxi airport diagrams as an alternate split-screen view.

We found the virtual attitude indictor surprisingly realistic, complete with the up-and-down-bobble motion you would see on a spinning iron gyro. The electronic horizon is plenty sensitive, without the data lag that we’re accustomed to seeing with other portable AHRS units.

The attitude display is supported by other backup instruments on the Panel page, including airspeed, vertical speed, altitude and track heading. While these are GPS-derived, we think they have plenty of value in a backup situation.

In addition to the attitude function, Pilot 6.0 and 2.8 display recommendations for flying right-hand traffic patterns at specific airports. This data is accessed in the Airport page by selecting the Runway tab. There’s also special use a new airspace frequency function.

If you fly with an adventure camera, we think Garmin’s VIRB Elite is worth a look (only the Elite model is compatible with the app). For cockpit use, we prefer the VIRB’s feature set, menu structure and battery endurance over the GoPro Hero. The new Pilot app takes the camera interface to a higher level since it can display the VIRB’s video on a dedicated split screen. This also allows you to start and stop the camera’s recording and photo function. The VIRB connects to the iOS device with a WiFi connection and has a list price of $399.