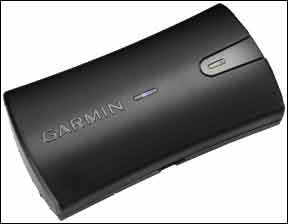 The GPS chips found in consumer-grade products like the iPad seem to suck less than they did two years ago, but there’s still a bustling little market for external or remote receivers like the new GLO just introduced by Garmin.

It’s called GLO, we surmise, because it’s the only remote we know of that receives both the U.S. GPS constellation and the Russian GLONASS system, both of which have 24 satellites on orbit. Garmin says this gives GLO a 20-second faster lock-on compared to a GPS-only receiver and the position update is 10 times per second and 10 times faster than the GPS chips used in most consumer electronics.

With that many satellites in view, marginal position geometry is about impossible, so GLO’s signal calc sticks like glue. Whether this really matters or not is debatable, but if you’re relying on a smartphone or tablet to navigate, a better GPS engine makes sense if it’s cheap. And at $99 suggested retail, the GLO certainly is.

Right out of the box, the GLO Garmin sent us was charged and ready to rock. Switching it on paired it with an iPad in the time it took to open the settings menu to wake things up. Like other remotes on the market, it links via Bluetooth. Pairing it proved seamless.

The device is small—3 inches by 1.5 inches or about the size of a large electronic key fob. Much of that size is taken up by a lithium-ion battery that Garmin says will power the GLO for 12 hours. It’s rechargeable via ship’s power or USB voltage.

To keep it from careening bank shots across the glareshield or car dashboard, the GLO has a friction pad. Nice idea, but we found that it works well on smooth, polished surfaces, but not as well on textured material. It held on to the car dashboard, but barely.

GLO is usable with any app requiring GPS, not just Garmin’s new Pilot app for the iPad and Android tablets. It will work with any Bluetooth-capable device, including smartphones .

On a flight trial with Pilot running on an iPad, GLO performed as claimed, finding itself quickly and showing no tendency to lose lock when switching from one app to another, the standard test for lobotomizing onboard GPS receivers.

In a future issue, we’ll compare it to competing units: the Bad Elf and DUAL offerings. For more, see www.garmin.com.