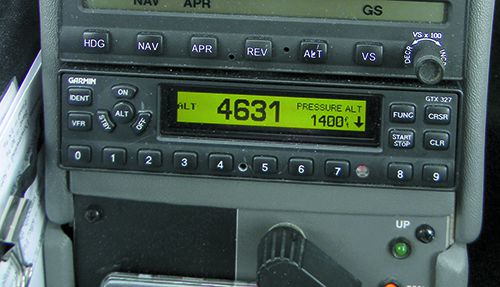 Face it, transponders live tough lives. Their high power out generates lots of heat in the radio stack and ultimately that takes a toll on internal components. So when searching the used market for a sweet deal on a transponder, choose wisely. One slam-dunk winner could be the discontinued Garmin GTX 327.

This is an all-digital Mode A/C model that was a popular pairing with the Garmin GNS navigator and has a good service record because of its solid-state design and rugged control set. Plenty still exist, but many are being removed for a relatively easy transition to Garmin’s flagship ADS-B Out GTX 345.

Searching the used avionics market, we found GTX 327 units priced as low as $500 and as high as $1000 after a factory repair. In our view $750-$800 might be a fair price if it includes mounting rack and connectors. Don’t forget the antenna and altitude encoder, though, which probably won’t be included.

Like any used-market buy it takes a good eye to pick a cherry and it should be obvious which ones lived a hard life. Are the labels on the function keys worn? Is the display and lens healthy? Team with an avionics shop that can put the unit on the test bench to make sure it’s a keeper. The right unit could be the best solution, but keep in mind that it may not be the best solution if you need ADS-B Out and a transponder. Garmin charges a flat-rate repair fee of $590 for any unit that comes back to the factory, and it’ll be slapped with a one-year warranty after the repair.

Still shopping? We caution against spending anything on an analog transponder. That is, one with a mechanical switch deck and cavity oscillator. Legacy models from King, Narco and Collins all used cavity oscillators to generate their high amounts of power— some as high as 250 watts of output. After a long while these components break down and eventually the transponder might only output half of that power. You know what that means—either you’ll hear about it from ATC or from your shop during a transponder check—and it’s one reason for upgrading.

Last, we caution against legacy units with fading field support. We’re talking King KT76A/C, Narco AT150 and Collins TDR950 to name a few. In our view it just doesn’t make sense to spend hundreds of dollars on these old rigs.