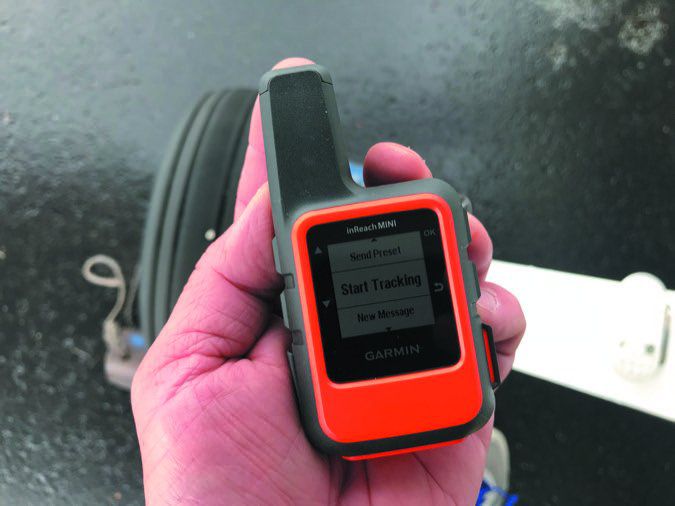 When we looked at Garmin’s $499 Iridium-based inReach Explorer+ satellite communicator/tracker in the May 2017 Aviation Consumer, we thought it was nearly the right size for use both inside and outside of the cockpit. But we didn’t think the extra $100 for the preloaded topo maps and compass was worth it for cockpit use. Many pilots already have plenty of mapping capability on a tablet and on a panel navigator.

Now Garmin has the $349 inReach Mini, a repackaged version of the full-size device that literally fits in the palm of the hand, or comfortably in a shirt pocket. If you can live without onscreen mapping, we think it’s the better choice for basic cabin messaging and belt-and-suspender SOS capability.

Recall that the inReach was Garmin’s first rebranded DeLorme product after buying the company a couple of years ago.

Like the full-sized inReach communicators, the new Mini works with the subscription-based Iridium satellite network. After unpackaging the device, we marveled at its size.

At 2.04 by 3.90 by 1.0 inches and weighing 3.5 ounces, this thing is tiny. Check that against the Explorer+, which is 2.7 by 6.5 by 1.5 inches and weighs 7.5 ounces. It’s a good thing the Mini comes with a carabiner clip (and a spine mount adapter) because if it falls under a seat or in a tight, dark space, finding it could be a challenge. It’s durable, though, and fits nicely in the hand.

The Mini has a lithium-ion battery with less endurance than its full-size brethren. It will run up to 50 hours at 10-minute tracking intervals with the default two-minute logging. In power save mode, it can run for 20 days and it holds a charge for up to one year when it’s powered off. The battery life for the Explorer+ is nearly twice that. The device is charged with a Micro-USB cable.

Even if it had the capability, the device wouldn’t work well for onscreen mapping. As you would suspect, the Mini has a tiny display. At .9 by .9 inches and with a 128 by 128 pixel count, we think the monochrome, transflective non-touch screen will be a struggle for aging eyes.

That makes a stronger argument for using the device with a smartphone app. More on that in a minute. You can customize the display’s backlighting brightness and also set the length of time before the backlighting turns off.

Unlike the flagship Explorer+, the Mini doesn’t have a built-in barometric altimeter or a compass.

The inReach Mini has a simple control set with a total of six buttons. Unlike the Explorer+, it has no rocker keys on the face, but function keys on each side of the case. See the graphic on the opposite page. The Iridium satellite antenna is nicely molded into the chassis and the power button lives at the top. Like the full-sized communicators, the Mini has a rugged feel and is designed to survive the elements. The USB charging port is contained under a protective weather cap, plus the device has an IPX7 water rating, which means it’s suitable for water splashes, rain and snow. It’s not suitable for swimming and the IPX7 water rating doesn’t include high-speed water sports. Seaplane flying—a potentially good application for the device in remote areas—is fair game, as long as you don’t sink.

activation. Pull the rubber cap away and you’ll have access to the button when you need to dispatch rescue helicopters to your location. While you can edit a custom SOS message, there’s a default one that transmits along with your current location.

Once powered up, the Mini acquires a GPS fix and does a handshake with the Iridium satellite network. Once the activation was squared away, the unit locked on quickly. It requires a clear view of the sky to transmit messages and track points over the Iridium network, but it worked well inside the cabin of a high-wing Cessna and in the woods.

When there’s a current subscription in place, you can use the Mini as a standalone communicator or connect to it with Garmin’s Pilot app via Bluetooth. We’ll focus on the aviation-specific Pilot app (we used version 9.0.3), rather than the Earthmate nav app, which comes free with the purchase of an inReach.

You’ll find the inReach in the Connext tab of the Pilot app, under Devices. To communicate via text messaging, select the Calls/Msgs tab and up comes a familiar text editor that mimics the SMS messaging app on a smartphone. The utility also merges your phone’s contact list. Messaging couldn’t get more straightforward.

But don’t expect blazing send and receive speeds. On average, we waited nearly 10 minutes total for short messages to send and ultimately appear in the recipient’s inbox.

If you aren’t communicating through the Garmin Pilot app, the inReach Mini can be used standalone, of course. Typing messages is, well, not exactly efficient given the small screen and lack of a keypad. Then again, you won’t be typing your life story with it. Think in terms of on-the-go utility.

Through the MapShare program onwww.explore.garmin.com. (after creating a personal login), you can edit up to three of your own preset messages to a specific recipient. Then from the Mini’s main menu, select Send Preset and choose the message you want and select Send. Maybe you’ve preset something like “Departing now” or “Pick me up at seaplane dock.” In general, you can send all messages to an SMS phone number, an email address or another inReach device. You can also add contacts on the Explore website and sync them to the device.

There’s also Quick Messages, which can also be customized, but aren’t assigned to a given recipient and are unlimited in number. You set these up under the Quick Text Messages utility on the website.

Free-form messages allow you type as you wish directly from the Mini and also from the Garmin D2 Charlie Pilot’s watch, plus from some Garmin Forerunner and Fenix-series watches. It connects wirelessly with Garmin’s ANT+ technology, which is also used for many other Garmin products. We’ve been using ANT+ for years on Garmin’s cycling sensors and it works well.

When sending messages from the Mini, you scroll through the functions using the up and down keys on the right side of the case. Worth mentioning is that you can combine a Quick text message with custom text at the end of it. Maybe you want to tell your recipient what time you’ll be arriving at the seaplane dock, or to be sure to remember the beer.

To type out a new message from scratch, scroll through the menus and select the Write Message option (with the OK key). Typing a message can be slow because you pluck each character (including space and backspace/delete)—one at a time—from a vertically scrolling alphabetical list on the far right side of the display. Once you have your message in place, hit Send and it’s off.

You’re limited to 160 characters per message. Forget about photos, although you can post a message to social media, including Facebook, Twitter and to your MapShare page.

You can also receive messages, of course, and the device checks for new ones at predefined 10-second intervals. You can customize the time intervals, but the more you update, the more battery life you’ll eat. You can manually check for new messages, but the most frequent two-minute interval is only available on the premium subscription plan.

You can set up sounds (and volume level) so the device alerts you when a new message comes in. There’s also a ring for sent messages, critical alerts and for when the device powers off.

Worried about how much data you’re using? We would keep tabs on it and Data Use is found in the Utilities menu, where you can also reset the counter for a fresh billing cycle.

Sending Out An SOS

Just like Sting and the Police sang about in 1979, you can send out an SOS at any time. Pull away the guard, hold the SOS button and wait for the countdown to send the default message and your position. The distress call is routed to a staffed (24/7) inReach command center. You’ll get a confirmation message from the emergency response team and then you’ll reply to it, letting them know you are alert enough to communicate. For the first 10 minutes of the rescue sequence, an updated location is sent every 10 minutes when moving and every 30 minutes when stationary. You can also cancel the SOS by holding the button again, transmitting a cancellation request.

We’ve been asked if the technology is a suitable replacement for ELT technology, including PLBs, but we think it’s not for obvious reasons. On the other hand, we think the device has sizable utility for ditching, especially if you’re on the move.

That’s where the tracking feature comes in. When you start the tracking (simply hit OK from the Tracking menu), the device logs your location and updates it at the specified logging interval. Your track line and track points appear on your MapShare page for others to see.

We skipped the powerful Earthmate app interface in this review because it isn’t an aviation app. The inReach doesn’t interact with Garmin Pilot aero or topo data and perhaps it should. You could run both apps, but even Garmin agrees switching between them in flight might be confusing.

Since Earthmate runs without an internet connection, you could theoretically use the Mini to navigate to waypoints and locations stored in the device from the MapShare webpage. Maybe you want to land in a remote body of water or strip you’ve pre-saved.

In case you don’t have enough data subscriptions, you’ll have to pony up $14.95 per month for the basic Safety plan. It includes 10 text messages (that’s not many) and 50 cents for each additional text. We think the plan that could make the most sense for aviation use is the $34.95 per-month Recreational plan, which allows 40 texts and unlimited tracking. See all the plans atwww.explore.garmin.com.