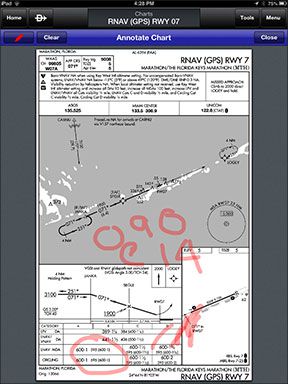 Any pilot who’s operated a Garmin aviation portable GPS will be familiar with dynamic navigation maps. Now, Garmin brings the familiar dynamic mapping to the latest version of the Pilot app.

With dynamic mapping, the user can customize the look of navigation and base maps and choose between track-up or north-up moving map orientation. With traditional static maps, the on-screen labels appear in a fixed position and orientation. So when the map is rotated, the labels may appear sideways or upside down. It’s a lot like viewing a paper map sideways or upside down. When in track-up mode, however, navigation maps on Garmin Pilot will dynamically adjust to the direction of flight—automatically turning the maps so the labels are upright.

When zooming into an airport, Garmin’s SafeTaxi airport diagrams automatically appear on the moving map without the need to switch to a dedicated airport diagram page.

The maps on the updated app are highly configurable, resulting in a higher level of customization, compared to the older version. You can change the map color, visibility range and alter the label sizes for airports and navaids.

Compared to the older version of the Pilot app (which we covered in-depth in the April 2012 issue of Aviation Consumer), version 5.0 improves the speed of map redraws. We used the updated app on a trip from New England to southern Florida—frequently changing from high altitude IFR to VFR charts—and enjoyed lightning-fast map refreshes.

The app has a home function, which calls up a big-icon menu structure that looks similar to the menu structure on Garmin aera-series portable or panel-mount GTN navigators.

Noting The Chart
A new chart annotation feature allows the user to highlight or make notes on approach charts. It’s like using a classic Etch A Sketch—just finger the chart to draw attention to minimums, fixes or scribble wind and ATIS information—for example.

Any notes you scribble on the chart (or on the airport facility directory) remain there until the next chart cycle or until you clear the annotation. Annotation might work better with a stylus—especially on a iPad mini or iPhone—and if you have fat fingers, but we think most pilots can make it work.

Garmin Pilot 5.0 makes use of cloud-based information storage. All trips, aircraft, bookmarked flight plans, pilot details and user waypoints are automatically saved to the Garmin cloud and tied to the pilot’s username, so pilots with two Garmin-enabled devices—like a tablet and a smart phone—can log in and access their information from each one.

Garmin says the latest update of Pilot—and all future updates—incorporates customer-requested features and improvements. This type of forward thinking was a big part of Garmin’s success in the portable GPS market. The latest version is available as a free update for existing iOS Garmin Pilot subscribers. New customers can try the app free for 30 days. After that, it’s $9.99 per month or $74.99 annually. Garmin is planning a similar update to Pilot for Android applications in the coming year.

We think the new Garmin Pilot version 5.0 steps the user interface up several notches from the original Pilot MyCast, while retaining the intuitive feature set we liked in the original version.

We can’t help but wonder if apps with this level of advanced mapping and reasonable subscription costs will kill the aviation portable GPS forever, even if the cockpit tablet it plays on is less than perfect.