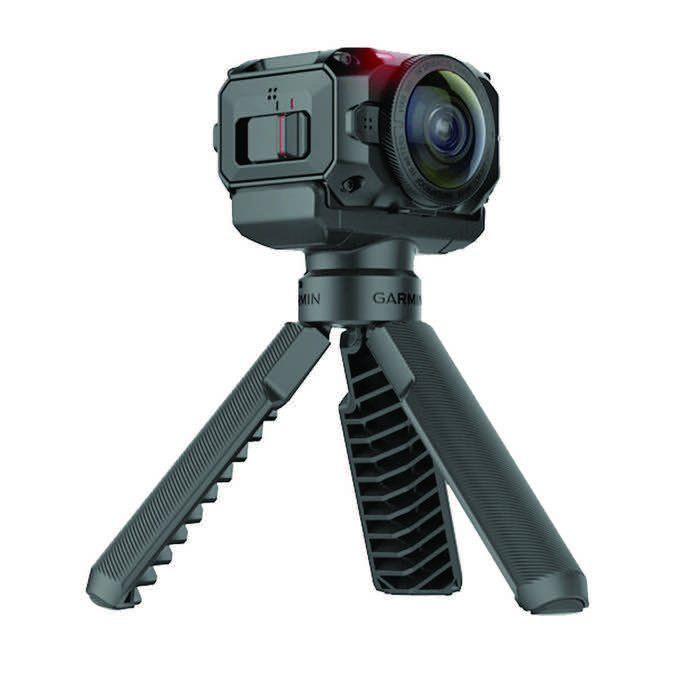 If point-of-view or action cams are as common as iPads in the modern cockpit, buyers may be getting a little bored with the ordinary flat footage they produce. Enter the 360 camera, a gadget that literally has eyes in the back of its head. The 360 market hasn’t exactly exploded, but there are a half dozen to pick from, with more on the way.

What do they do? They produce footage commonly called VR or virtual reality. This allows the viewer to use a cursor to scroll around the imagery 360 degrees horizontally and, depending the camera, up to 360 degrees vertically. It’s supposed to be like actually being there but, trust us, you’d rather be there than sitting in your den scrolling around a YouTube video.

For this review, we’re examining the Garmin VIRB 360 simply because Garmin is an aviation company so, not surprisingly, its camera works with aviation accessories like Bluetooth headsets. And since Garmin is primarily a GPS company, the tracking features built into the VIRB 360 are well suited for aviation and for any kind of action sports.

The VIRB 360 follows the VIRB Ultra 30 we reviewed in the November 2016 issue of Aviation Consumer. It’s also a bit of throwback to the previous VIRB series, the VIRB XE and it has similar form factor. In fact, physically, the 360 looks like a pair of XEs sawed in half and melded back together, even though it’s a new platform.

The 360 has wide-angle lenses on the front and the back and these are protected by a removable (and replaceable) plastic cover. And that’s a good thing, because those lenses are right out there and no matter how careful you are, you’ll scratch them.

While most action cams use the GoPro standard finger-type mount as part of the case, the 360 is self-contained in its own case and the mounts are two snap-on accessories, one for the GoPro style and the other a standard -20 mount. This is a plus because it’s thus easy to mount the camera on a tripod and—bonus—the camera is shipped with a small handle that opens up into a miniature tripod. That’s one less piece you have to carry and if there’s any downside to POV cameras, it’s all the junk you have to carry to mount and support them.

Speaking of support, this camera ain’t a cheap date. You’ll need a high-capacity Micro SD card and although Garmin says a 32GB will work, we would recommend a 128GB U3 card, which will cost about $60. A small card will fill up pretty quickly.

The card snaps into a slot in a panel that has the USB/charging port and a video output port for viewing the camera’s output. Once fully charged, battery life is good. We attached the camera in the cockpit of the B-29 Doc at AirVenture last July and it ran continuously for about 90 minutes, with battery and card space to spare. Battery storage time appears to be excellent. We left the camera unused for two months and the battery was still at about half capacity.

While the VIRB Ultra 30 sports a touchscreen control interface that’s effortless to use, the 360 reverts back to the old button-and-menu design. We’re not fans, although there are so few settings that it’s not excruciating to use. It’s just slow. To avoid that, we recommend controlling the camera with the free wireless app Garmin offers.

The app allows you to easily set things like photo mode, timers, exposure compensation and two things unique to 360 cameras: Stitch distance and lens control. If the 360 has one killer feature, it’s that it stitches the footage inside the camera rather than requiring post production work to do this. Stitching combines the two images into a seamless whole. You can select a near or far distance stitch, depending on what you’re shooting. When the footage is played, you’ll barely notice the stitch line.

The camera also allows you to set 360 mode or use the front or rear lens only or shoot RAW footage on both and then stitch it yourself or use it as you please. RAW footage will appear as extreme wide angle from either lens. Selecting either the front or the rear lens will yield flat footage similar to other POV cameras.The 360 has a range of resolution and frame choices, but isn’t as flexible as the VIRB Ultra 30. For stitched footage, it’s up to 4K or 3840 by 2160 at 30 frames. For unstitched images, the camera will yield 5.7K (2880 square) and it will shoot traditional flat footage at 1080 and up to 120 FPS.

This is where the app comes in handy. The 360 has no viewer, so to aim the shots, the apps playback function is helpful. On the other hand, the lens views are so wide that if you point the camera in the general direction, you’ll get usable footage.

As with all of the VIRBs, the 360 has a sliding switch on the side of the camera to activate the record function. This works whether the camera is powered up or not, a feature we find indispensable. For audio input, the camera will pair with Bluetooth headsets, but it will not accept a hardwired external microphone, as will the other VIRB models.

It does have four onboard mics which produce what Garmin calls spatial audio. In other words, the audio is picked up from multiple directions. None of this helps with in-cockpit recording, however, if that’s your thing.

When positioning the camera, it helps to think ahead about what the camera will see in the 360-degree sphere. If you had it on the glareshield looking forward, it will see over the nose and the rear lens will see you in the cockpit. The viewer has the choice of scrolling around to see either view.

Video streamers such as YouTube and Vimeo now process the 360 metadata necessary to make the footage viewable in 360. You don’t have to process or edit it in any special way.

However…combining it with traditional flat footage is difficult at best. We combined 360 footage with flat footage from the VIRB Ultra 30 in Adobe’s Premier Pro and found the combination unworkable. As we go to press this month, Garmin has just announced an upgrade to its free editing program, VIRB Edit, that it says allows combining the two types of footage. We haven’t had time to try the feature so we’ll report on it later. In our view, being able to combine the footage is a must because most of us won’t shoot everything in 360.

Another powerful feature the VIRB 360 has is post-production stabilization. Using the gyro data contained in the footage, VIRB edit can remove shake and wobble from footage producing gimble-like smoothness. Even if you don’t shoot much 360, having that capability can turn average footage in extraordinary footage.

In our view, at $799 ($749 discounted), the VIRB 360 is too expensive to be other than a specialty camera for limited kinds of shooting. If you already have an action cam or two and have money to burn for another one, the 360 may be the best, easiest-to-use choice for aviation purposes.

The in-camera stitching works well and reduces the hassle factor of using it. Still, the 360 is just not a must-have.