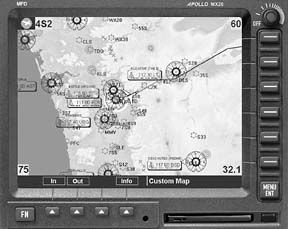 What with magazine advertising, tradeshows and Web sites, the buyer of aviation products and services is bombarded with information about potential purchases. Indeed, theres so much information about so many products that sorting through it all is a full-time job.

In fact, its our full-time job. And since we arent beholden to a single dollar of advertising revenue, we can make the cut with only one interest in mind: Yours. Once a year, we look back on the products weve reviewed with the intent of picking the very best weve found in a dozen or so categories. Here then is our annual Gear of Year review of the best stuff out there.

Product of the Year — UPSAT/Apollo MX-20
Not so long ago-perhaps five years-we wondered if color cockpit displays would ever be affordable for owners of light aircraft. Now were surprised at how few airplanes dont have them, in some form.

Weve tried most of the major players in this field we pick one of the best as our product of the year-UPSAT/Apollos MX-20.

When we first saw the MX-20 at a tradeshow three years ago, we were stunned by its rich color and high resolution display and even more impressed when UPSAT actually started delivering these units in volume shortly thereafter.

We pick the MX-20 as the product of the year on several counts. First, the unit itself is well designed, easy to use and flexible enough to accommodate other sensors, such as Stormscope, traffic input and eventually radar and engine monitoring.

True, the Avidyne FlightMax is the undisputed leader as a replacement for aging radar displays and Bendix/King offers cheaper map displays, but we think the MX-20 offers the best combination of high-end features, affordable cost, expandability for the future all coupled to a terrific display.

Best Metal Polish — Flitz
Stumbling through the booths at Oshkosh, we cant count the number of times weve been assaulted by those guys wearing headsets and flogging everything from kitchen utensils to garage door openers.

The ones hawking metal polish seem to always catch our ear, however, so last year we gathered up a bunch of these products and tried them out. The winner? Flitz metal polish, a product developed in Germany for the auto industry.

Its not that Flitz flat out performs everything else on the market, just that for spinners and other bright work, it seemed to achieve the best results for the least effort. And any product that does that for under $20 is a winner in our view. Contact Flitz at 800-253-6466 or www.flitz.com.

Best Tiedowns — FlyTies and Deal Tiedowns
A certain tinge of guilt washes over us all when we walk away from an airplane we havent tied down. Is it asking too much to lash old Dobbin down against the slight chance a gale will rip through?

Yes, sometimes it is, because no ropes or anchors are available. But two products we encountered might help. One is called FlyTies the other…well, it doesnt have a name. FlyTies are a portable tiedown system consisting of three rods driven at angles into the soil and anchoring a donut-sized Delrin plug with an anchor. The $139.95 kit is pricey but effective.

The bargain version of this design is sold by Deal Associates and is called merely a tiedown kit. Whats neat about the Deal version is that rather than using a Delrin donut, it relies on three rods driven at angles through an ordinary piece of angle iron. The angles double as chocks on hard ground. Very clever and at $124, a good value.

Best Portable — GPS Garmin 295
Whatever happened to the portable GPS frenzy? For a while there, it seemed as though Garmin, Lowrance and Magellan were introducing a new model every other month.

All thats died down now and the portable market is, as they say in the executive suites, mature. In our estimation, with the excitement thus quelled, the best-of-the-best is the Garmin 295.

At $1450 or so retail, its also the most expensive but delivers a range of impressive features, not the least of which is a color map display rivaling Garmins panel mount products. The 295 is flexible, too, and capable of running Garmins ground navigation software so you can actually find that business meeting after you land.

Best Deal In Panel GPS — Garmin 300XL/Apollo GX60
While the color mapcom seems to have become the standard upgrade path for panel-mount navigators, its hardly the only choice. In our February 2001 issue, we examined some mid-priced alternatives and concluded the two best are Garmins GNC300XL and Apollo/UPSATs GX60.

Both have credible moving maps and excellent comm sections, even if they lack the glitz found in Garmins higher end color boxes. After all, not everyone can afford or wants to spend $10,000 for a GPS upgrade and either of these two navigators will cost in the range of $6000 to $7000.

Best CO Detector — AIM 696
Aircraft heaters keep the cabin toasty warm by scavenging exhaust, an efficient design that has the side effect of occasionally pumping carbon monoxide into the cabin. Although it doesnt happen often, CO incursion has caused some fatal accidents.

The cheapest protection against this is a CO detector, of which there are now a half dozen on the market. We think the best value among these is the AIM 696 at $44.95. Its a cut above standard household detectors and displays levels above 35 PPM, which we believe is a realistic threshold.

But act fast; these units will soon be discontinued and we dont know what will replace them. Contact 888-362-7123 or www.aeromedix.com.

Best Panel Intercom — PS Engineering and NAT
Anyone who learned to fly during the past decade is lucky indeed. Or perhaps smart. While the airplanes are just as ratty as they once were, at least student pilots these days get to keep their hearing, thanks to the advent of intercoms and headsets as standard equipment.

Theres a passel of panel-mounted intercoms out there, close to two dozen at last count. If we had to pick one-okay, two-our top choice would be models from PS Engineering or Northern Airborne Technologies, two standout companies in the intercom and audio field.

Both make cutting edge boxes with squelch that works in high-noise cockpits, stereo music input and first-rate audio quality thats a vast improvement over the scratchy, feeble squealing that passed for cockpit communication a decade ago. Contact PS Engineering at 800-427-2376 or www.ps-engineering.com and NAT at 250-763-2232 or www.northernairborne.com.

Best IFR Prep — King Schools CD-ROM
Studying for the IFR written can be tedious beyond description, especially for the busy aircraft owner who has better things to do.

A handful of companies offer products to make test prep more efficient if not entirely painless. Our choice for the best, at least in the CD-ROM format, is King Schools, which makes nice use of interactive video on a 16 CD set costing $279. King also sells video- based test prep programs but we think the CD-ROM is more effective. Contact King at 800-854-1001 or www.kingschools.com.

Best Oil Gadget TOR Funnels
In aviation, a quarter buys nothing, not so much as a stamp to send the bank your monthly airplane payment.

But we know of at least one bargain for under 25 cents. A buck-seventy-five buys 10 disposable paper funnels for tackling the messy job of adding a quart of oil to your engine. Theyre long enough to reach even a recessed filler neck and when youre done, toss the oily mess and walk away.

Best Stereo Headset — DRE 6000
There are so many aviation headsets on the market that sorting out competing claims can be a full-time job. (Thats why you pay us to do it.) In the rarefied world of stereo aviation headsets, our trials revealed a surprising winner: The DRE 6000 ANR.

DRE is known for excellent portable intercomes and we thought its stereo headset performed well compared to the likes of Boses sophisticated Headset X and the LightSPEED 20XL. At $299, its the walkaway best value.

Top Safety Innovation — Bendix/King GPWS
While well admit its hardly cheap, Bendix/King/Honeywells new GA-EGPWS at least gives owners of small aircraft an option they never had before: Practical ground proximity warning equipment or GPWS, something thats been standard equipment on the airlines for years.

A minimal installation of this system will cost about $11,000 with the bill more likely to total $17,000, with graphic interface. But with controlled flight into terrain still a notable cause of GA accidents, that price will seem cheap if it keeps you out of the dirt and trees only once.

Best Visors — Ultravisor
The stock sun visors in most GA aircraft stink. Theyre too small, hard to position and the mounting hardware leaves much to be desired. Rosen Products offers high-class replacements but many owners blanche at the high cost.

Theres an alternative for Cessna and Beech owners. Ultravisor makes a replacement for most models of these airplanes that sells for about $100 less than the Rosen version. Ultravisors are a terrific value and a significant improvement over the stock units.