We didn’t know what to expect when Garmin invited us to its Olathe, Kansas, testing grounds to fly Autoland. But sitting shotgun in a new Piper M600 turboprop observing Garmin’s latest layer of safety backstop systems called Autonomi, there was no question Autoland would win Aviation Consumer’s prestigious Gear of the Year award.

It was equally impressive when we put the system through its paces in a Cirrus SF-50 Vision Jet, where it’s called Safe Return. As we go to press in May 2020, Daher announced the system trademarked as Homesafe Emergency Autoland for the TBM940 turboprop. Piper has earned FAA certification (via type certification) for Autoland on its M600, and approval for Cirrus and Daher is imminent.

Other than flying an instrument procedure to landing and shutting the engine down so passengers can safely egress, Autoland takes into account the weather enroute to and at the destination airport, while clearing terrain and obstacles along the way, and it selects the most suitable runway based on weather, the aircraft’s performance and available ground support services. Emergency Autoland can be activated by anyone in the cabin and deactivated at any time (with the autopilot disconnect switch) and if the pilot doesn’t respond to prompts from the G3000 avionics—the supporting avionics platform—the system engages automatically.

You can read a full report on Garmin’s Autoland in the December 2019 Aviation Consumer, and link to the flight demo video at tinyurl.com/yag6b7xe.

Portable comm transceivers still live on because we need them for backup and sometimes as primary talkers. They need to be easy to use and rugged and easily connect with aviation headsets. Based on our long-term trial with the PJ2 radio, Sporty’s delivers all of that for a reasonable $199 price point.

Where other portables require a headset adapter to plug in aviation headsets, the PJ2 has a direct plug-in interface. In our flight and bench trials we found the unit’s receiver performance to be acceptable without an external antenna, but like all low-power transmitters you’ll need an external antenna for high altitudes and long-distance transmissions. Apparently there’s big demand for a modern portable radio. “The PJ2 has been a great seller—in fact, the best sales of any portable radio we’ve had in a long time,” John Zimmerman at Sporty’s told us. Contact www.sportys.com. 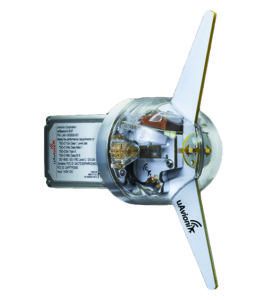 Who ever thought you could install a transponder in a tail light? Not us, but uAvionix thought it out and built the tailBeaconX, a 1090ES ADS-B Out transponder that’s engineered to meet the proposed space-based ADS-B infrastructure currently on the table for use in Canada and beyond. That spec includes the requirement for transponder Diversity, which is a twin-blade antenna configuration and built-in circuitry for playing with a satellite-based ADS-B network.

The tailBeaconX weighs in at 3.5 ounces and measures 4.4 inches tall by 4.4 inches deep and has a built-in Mode S transponder, altitude encoder and an LED tail light for mounting—you guessed it—in place of the existing incandescent tail light on a variety of airframes. Unlike the wingtip-mounted skyBeacon, the tailBeaconX doesn’t have integral strobe lighting. 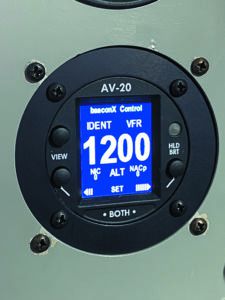 Since the tailBeaconX is a completely remote-mounted system, you’ll need a way to control and tune the system from the cockpit. That’s where the uAvionix AV-20 (2.25-inch) and full-sized AV-30 (3-inch round cutout) EFIS displays come in. These instruments offer onscreen control and connect to the tailBeaconX over a two-wire RS-232 databus.

As for performance, the system excelled. In our Glastar test bed, it passed the inflight performance report with flying colors, scoring high numbers for accuracy and signal quality at low and high altitudes. Visit www.uavionix.com and read a full report in the March 2020 Aviation Consumer. 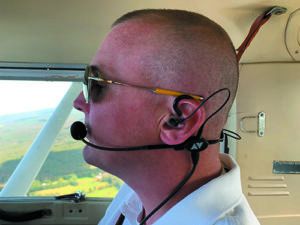 There’s a certain freedom that tags along with earbud-style headsets and we’ve always found the Clarity Aloft models to be solid performers. That’s why we were anxious to try the company’s latest Flex model. We weren’t disappointed, but we did wish the $775 set had Bluetooth connectivity.

In fact, the Pipistrel Alpha Electro is the only commercially available electric airplane, other than a few motorgliders. And Pipistrel is finding buyers for the $142,000 (plus ground charging hardware) LSA, even if in small numbers. The Electro we flew for the flight trial in

the August 2019 Aviation Consumer was much improved over the version we flew in 2015, and the next-gen airplane will have better batteries that will be water cooled for discharge and recharge, which promises to nearly double the effective battery life, while knocking as much as $5 per hour off battery replacement costs. We salute Pipistrel for its progress and determination. Visit www.pipistrel-aircraft.com.

Eventually you might be tasked with mastering Garmin’s popular G1000 integrated avionics, so we set out to find the best e-study aids to help get it done. Among a handful of courses, Jeppesen’s Garmin G1000 VFR & IFR Procedures Course impressed us the most. It uses an interactive G1000 simulator to guide the student through real-world scenarios for using the system.

The IFR and VFR sections are offered separately or in a bundle, and we like that the simulator mimics a typical G1000 setup in a Diamond piston single—the first airplane with a G1000 as part of its type certificate. If we had a nit to pick it would be that the trainer is limited to desktop computers (Mac and Windows) and won’t work on a smartphone. Still, we think the VFR and IFR bundle is a good value at $199.96. Contact www.jeppesen.com. 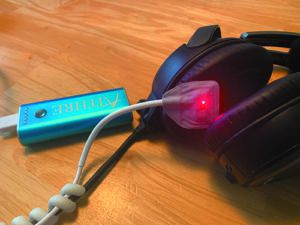 The problem with a fingertip pulse oximeter is that it doesn’t offer full-time monitoring. That means if you’re hypoxic, you might not have the smarts to stick your finger in the thing to take a reading when you need it the most. That very scenario is what led to the creation of the Illyrian from Idaho-based Aithre. After a close call with hypoxia in his Van’s RV-10, company founder and endurance athlete Jim Ruttler developed the $169 device that has a wireless sensor that measures under the eartip, allowing for full-time monitoring with the Connect app.  The sensor fits under the cup of a headset (above) and requires a USB-connected battery pack (provided) or can plug into panel USB power. The device is also compatible with a companion WatchOS app for the Apple Watch. Read the full report in the February 2020 Aviation Consumer and visit www.aithreaviation.com. 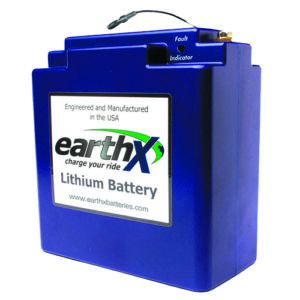 We say “promising” because for a lithium-ion aircraft battery to work for a wide variety of GA airplanes it needs to be affordable, lightweight and have appropriate failsafe built in. When we scanned the market in our May 2020 issue, we were impressed with the True Blue Power Lithium smart battery, but its price just isn’t practical for the market’s lower end. The earthX batteries, which are based upon lithium iron phosphate chemistry, have gained market traction in the experimental market and the ETX900-TSO (for replacing 25 or 35 Ah lead acid batteries) is the battery to watch. It’s currently in the FAA approval process and is expected to sell for $899. Visit www.earthxbatteries.com. 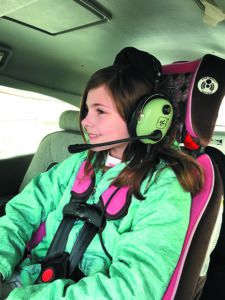 The problem with investing in aviation headsets for kids is they’ll outgrow them before you know it. That’s why the perfect set should be

upgradable to an adult-sized headset, or at least one that fits bigger kids. David Clark’s H10-13Y (street priced around $320) weighs 16.5 ounces and has a NRR (noise reduction rating) of 23 dB. It was a favorite in the youth headset flight trial in our June 2020 issue. We found it to have excellent build quality, good audio and a decent one-piece flexible boom mic. Visit www.davidclark.com. 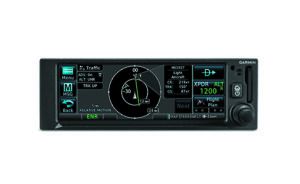 As we’ve been reporting, Garmin’s new line of budget-based GPS navigators don’t have ground-based VHF navigation capability, but they do have WAAS GPS, suitable for shooting ILS-like precision GPS approaches. One model in the lineup is the GNX 375, which also has a built-in ADS-B transponder. For aircraft that need both IFR GPS and ADS-B, we think it makes good sense.

Think of the GNX 375 as a slightly smaller GTN 650, less comm radio and VHF nav receiver. It has a 4.8-inch color touch display, built-in Flight Stream wireless hub for streaming ADS-B weather and traffic to a tablet running the Garmin Pilot or ForeFlight app and best of all, it’s compatible with a wide variety of third-party nav heads and autopilots. At $7995, we think it makes sense for airplanes begging for both ADS-B and an IFR GPS, but that can do without VHF nav. Visit www.garmin.com. 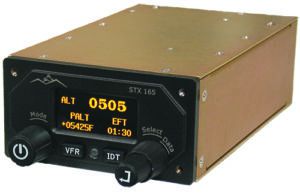 If your aircraft already has an IFR navigator and ADS-B, but its transponder is on the fritz, we think the Sandia STX 165 is a budget-based model worth looking at. It’s a space saver with its 3 ATI bezel and has a decent OLED display that works well in sun-splashed cabins. That’s the unit pictured above. Perhaps what we like best is that it has a built-in altitude encoder. There’s also a built-in timer and there’s an option for connecting with an OAT probe. At around $1950, we think the STX 165 is a good value. Visit www.sandia.aero.

Last, some advice for surviving the hardened insurance market, especially if you’re an aging pilot with a complex aircraft—turbines in particular. Our go-to insurance pros suggest you up your training and start an open and transparent discussion with your broker. Ask specifically what you can do to keep your rates as low as possible and perhaps even to ensure a renewal. It may mean downgrading to a less complex model. If you’ve been thinking about getting a new rating, now might be the time. Insurers like diverse experience. Type ratings, seaplane ratings, glider ratings—they’re all good. It’s all about proving that you aren’t a high-risk customer.