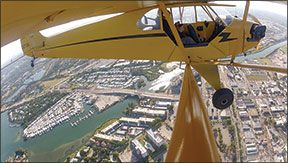 In an age of shameless navel gazing and epidemic self-absorption, how do you know if something really happened if you don’t have a clip of it on your YouTube channel? Thus, the profusion of so-called point of view (POV) cameras that can grab video from perches unimaginable a decade ago­—including airplane wings and cockpits.

GoPro dominates this market with a line of cameras at three price points, but there’s competition, most recently from Garmin, which is taking on GoPro with its VIRB action cameras. Cameras might not seem a natural fit for a GPS company, but Garmin has leveraged its presence in the sports/fitness segment and tailored these products to aviation, offering unique capabilities. There are other options, too, including the revitalized Contour, the Sony Action Cam, the JVC Adixxion and the Panasonic HX line. But because this is a limited interest area for pilots, in this review, we’re focusing on a head-to-head between GoPro and Garmin. Either, it turns out, is suitable for aviation photography.

If your iPhone or Droid hasn’t yet displaced that old camcorder you used to have, POV cameras are more like the former than the latter. They’re simply miniaturized and ruggedized video sensors in hardened, sometimes waterproof, cases suitable for sports or high-impact activities. Forget things like on-the-fly zooming, exposure compensation, or in-camera editing. What you get is a fixed focal-length lens with an HD sensor (video and still), audio recording, time lapse and slo mo and limited playback capability in a small package. Also, a low price. GoPro’s cheapest bundle sells for under $200 and the top of the line, the Hero3+, is $399. Garmin’s VIRB isn’t quite so inexpensive on the bottom end, but its Elite ($329) is comparable to the Hero3+, even if the comparison isn’t a perfect fit.

Although these cameras do the same thing and are similarly aimed at action sports, they do the job differently. Accessories, and especially operating logic, vary. For instance, if you don’t need remote wireless control—we’re not sure it’s worth the bother or expense—the complexity of each system is less and, for the VIRB, so is the cost. Also, the number of parts and pieces with these things—mounts, arms, cable adapters, converters, viewers, remotes—will challenge the most organized, leaving the scatterbrained among us perpetually wondering where all those bits got to.

GoPro
GoPro’s current line has three products, the Hero3, the Hero3+ Black and the Hero3+ Silver. These vary in price and capability. First the commonalities. All three shoot video up to 1080p, but the Black and Silver will shoot 1080p up to 60 frames a second and the lesser resolutions at 100 and 120 frames, which yields smooth slow motion footage—useful, maybe. For stills, the White offers 5 megapixels at a 3 fps burst, the Black has 12MP/30 burst and the Silver 10MP/10 burst. All three will do automatic time lapse between a quarter second and a full minute.

The GoPros are shipped with a clear plastic case and they need it to both protect the camera and provide mounting means. Although GoPro mounts are available in great profusion, there’s no ¼-20 insert for standard accessories for tripod mounting without the case. (Buy the aftermarket fixture.)

GoPro provides pressure-sensitive pads for helmets and flat or curved surfaces. These will adhere to windshields or even aircraft external surfaces without worry of losing the camera. They’ll also adhere to things like glareshields or overhead panels for shooting cockpit footage or time lapse. RAM sells a ball mount for the GoPro and with that, you can attach it to about anything with fully articulated aiming.

For remote audio, say to record ATC or intercom chatter, you’ll need GoPro’s USB-to-3.5mm adapter, which will accept an external, unpowered mic. With an adapter, you can tap directly into the ship’s intercom.

Controlling and viewing the GoPro’s video isn’t necessarily simple. The camera’s control logic has been a source of complaint since it first appeared seven years ago and it hasn’t improved much, in our view. It requires a clunky combination of menu step throughs with the front power button and execution of menu commands with the top or shutter button. Intuitive it’s not. It yields to regular use, but occasional users are likely to accidently switch to still shots or some other mode when video is wanted.

The GoPro has no viewer, so framing the shot is a best-guess affair. But the lens is so wide, it’s like close range with a shotgun. There are two workarounds for this, the LCD BacPac and/or a wireless app that controls the camera. For $79.99, the BacPac is a snap-on screen that gives the camera both a viewer and a touchscreen that simplifies the menu navigation—a little. The touchscreen isn’t quite as responsive as an iPhone, but it’s functional and provides useful playback capability.

All three GoPro cameras are wifi capable and suitable for use with the GoPro dedicated remote control. The Black Edition includes the remote, but it’s a $79.99 option with the other two models. The best alternative to avoid buying either the remote or the BacPac is GoPro’s free wireless app, available for IOS or Android. It allows easy remote control of the camera, makes the menus somewhat easier to manipulate and provides playback. But the wireless has so much latency that using it to frame the shot requires patience; it will work, just not quickly.

Garmin VIRB
Garmin’s appropriately if weirdly named VIRB—get it, action as in verb?—came out of nowhere a year ago. In taking on GoPro, Garmin is dancing to a different tune. For one, the camera’s form factor is long and narrow compared to GoPro’s basic box. It also requires no separate case for moisture protection and, like Garmin’s GPS products, it’s easier to operate. Pricewise, it’s competitive.

There are two models. The top-of-the-line VIRB Elite at $349.99 and the base VIRB at $249.99. Both cameras will shoot up to 1080p at 30 frames, 720p/60 and WVGA at 120 frames for slow motion. Like the GoPro, the VIRBs will do photo bursts and time lapse stills to similar specs. Still size is 8 to 16 megapixels in both models. Both have internal mics and external audio through a USB-to-3.5mm cable.

While the VIRBs appear to be more expensive than the GoPros, this isn’t the case when you compare like capabilities. The VIRBs have a built-in thumbnail viewer for aiming and playback, so if you add the GoPro’s $79 BacPac viewer to get the same capability, the prices are less, although the GoPro’s BacPac is larger and more vibrant. Both models can be controlled remotely, the VIRB through Garmin’s D2 watch and the Elite through both the watch and a dedicated remote control.

Garmin also gave the VIRB a mounting system that’s easier to use, in our estimation. The camera snaps into a cradle which in turn fits into a base screwed into a plate that attaches with pressure-sensitive adhesive. In our view, this works better than GoPro’s sliding snap system. However, you pay for the convenience; the adhesive mounts, which are expendable items, cost twice as much as the GoPro pads—about $19 for six versus $10 for the GoPro.

Where the Garmin excels is in operating logic. It has four dedicated—and labeled—keys for power/mode and menu navigation. The side slide switch has but one fuction—forward to record, aft to stop. Pick the camera up in any mode and slide the switch and you’re shooting. The VIRB’s viewer—standard—is tiny at 0.75 by 1.06 inches, but is adequate for framing and basic playback. For framing, it’s not as hobbled by latency as the GoPro wireless app is. While we’re on wireless, the VIRB Elite has this capability and can be operated remotely through Garmin’s free app on IOS or Android devices. The app works well and it’s easy to use, but lacks two things we think it needs: playback capability and live streaming. The GoPro does that, albeit not exceptionally well.

The VIRB uses the ANT+ network protocol to connect itself to other devices such as heart monitors, navigators and other sports-related devices. Naturally, since Garmin is a GPS company, the VIRB has its own GPS aboard and records track data which can be incorporated in finished videos using VIRB Edit, Garmin’s video software for the Mac and PC.

Which One?
Picking one of these cameras over its competition isn’t simple because they don’t have parallel capabilities. For a pilot or owner who’s also into sports and wants to shoot same, the VIRB is the better choice. It’s waterproof out of the box (IPX7 rating) and connects to other devices via ANT+. It can be a powerful training and tracking tool for users who like gadgets.

Since aviation also involves training (and gadgets), the VIRB would be our pick for in-cockpit shooting of flight lessons or just flights you might want to record to wow the inlaws. Pipe in the audio from the intercom and the VIRB will capture everything for review. Add track data and you’ve got a nice visual record of the flight.

For attachment outside the aircraft, we prefer the GoPro. Its small size and cubic form makes it easier to mount just about everywhere and the low profile offers less drag and less worry about losing it. The pressure-sensitive pads are strong enough to preclude this, but faith in chemistry has its limits.

Image quality between the two is comparable, but strongly lighting dependent. The VIRB yields a warmer image that’s sharper in the distance and it does better in harsh midday light than the GoPro.

The GoPro is a little bluer and softer in the mid-and far distances and doesn’t like contrasty, midday lighting. Given the apps, accessories and performance available, you won’t go wrong with either choice, in our opinion.

Our market scan turned up a basketful of $300-plus cameras and one sub-$100. This truly cheap camera is sold as the SJ1000 or the Sports HD DV. It may have other names, too. Find it for as little as $65 on Amazon. Now let’s get serious here­—this costs well under half of even the least expensive GoPro, so it can’t possibly be other than a curiosity, right?

Wrong. The SJ1000 has an impressive featureset including 1080p down to VGA and up to 12MP for stills. As standard equipment, it has a small, vibrant LCD viewer that puts the VIRB to shame. It comes with so many mounting brackets and accessories that we still haven’t figured them all out.

Image quality? Better than we imagined, but it appears to need just the right lighting to produce crisp images and we’re not sure how durable it is. But for $65, not bad.