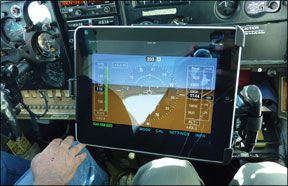 The age of the Big GPS unearthed an annoying truth: They dont fit in the cockpit. Now that weve evolved to the Really Big GPS, things have only gotten worse, so any attempt to mount a portable navigator can only be called a varying degree of compromise.

But compromise we must, so we recently set out to review a range of gadgets designed to mount a portable navigator in the cockpit in such a way that makes it

actually useful. Most of these are from RAM Mount Products, but there are others as well, including stock offerings from the GPS makers. For this article, well concentrate mostly on RAMs offerings.

At the outset, well declare a bias from the start. We dont much care for yoke mounts, except for the smaller navigators, which doesnt describe many of them these days. The reason for this loathing is several fold. Large GPS units can obscure the primary instruments, or at least portions of them and this compromises a cockpit ergonomic climate thats not all that great to begin with.

The larger the GPS is, the more weight it represents on a control that was never designed or intended to have stuff clamped to it. Yes, we know, you get used to it, but a heavy GPS on the yoke changes the control feel and can cause interference at times, which is something we simply dont want.

Last, the wires, in all their stinking tangliness. This has improved with the advent of Bluetooth technology, but its still a nuisance, in our view. For example, in Garmins GPSMAP 696, theres a fat power cable in and a skinnier XM antenna out. The good thing is that these wires are a little stiffer and fatter, so theyre not as prone to tangling as they once were. The bad news is theyre still there.

The only practical solution is to route and stow them semi-permanently out of way, using tie wraps, Velcro pads or commercially available wire ties and organizers. If you rent an airplane or otherwise remove the GPS frequently for dual duty, this adds to the nuisance factor. Some pilots buy an extra set of cables to address this, but the best solution remains use of Bluetooth where applicable and tie off what cables remain so theyre out of the way.

RAM Mounting Systems is well known for its extensive line of gadgets for mounting just about anything into anything. It has products to address a wide range of mounting challenges in aviation, marine, automotive, industrial and sporting applications.

Most of the products are based on a patented hard rubber ball-and-socket design originally called Round-A-Mount, from which RAM is derived. The core of each mount consists of a 1-inch hard rubber ball attached to a bracket of some kind, which is in turn attached to the object to be mounted.

Most RAM mounts consist of a custom plastic cradle that the device snaps into and to which the bracket and ball are screwed or clamped. From that point, the basic connection hardware is a spring-clamp arm equipped with a socket at each end into which the hard rubber balls fit. The arms are available in various lengths and styles to suit the users whims.

OEM mounting hardware has generally been fair to middling, in our view, but it seems to have improved over the years, since buyers have complained about flimsy mounts for what they view as expensive navigators. Another reason is that RAM has supplied some companies with GPS mounts, including Garmin.

RAM mounts tend to be a notch or two more rugged than the OEM offerings and they are hands down more flexible, so if you want to reduce the nuisance factor,

RAM has the parts and pieces to do that.

Our quest for the perfect mount started when we sought a means to mount an Apple iPad in the cockpit for aviation app testing. The iPad is so large that this is a significant problem. At 5.8 by 7.7 inches, the iPad obscures or interferes with something no matter where you put it.

First, the cradle. RAM used its standard solution for this: a plastic cradle with two tabs at the bottom and one at the top. The iPad simply snaps into this and youre done. (Retail: $66.05.)Ours fit perfectly. The cradle even has the Apple cutout at the back, although were not sure why.

From there, there are several choices. The iPad cradles ball mount can be screwed to the lower center of the cradle or offset to one side, a real plus if you cant wrangle the flexibility you need out the available range in the spring socket arms.

For yoke mounting, RAM provides a big honking C-clamp apparatus ($42.65) with a ball into which the socket arm snaps. The arms are available in various lengths, with prices between $15 and $25. Put the parts together, tighten the knobs and youre good to go.

In the Cessna 182 we tried the mount in, the iPad fit fine between the yoke horns, but it filled up the entire space. It blocked a sight picture of the lower panel, but this wasnt an issue on either the pilot or co-pilot side. But thats not to say there were no issues.

With the iPad (and the GPSMAP 696) in yoke mounts, control movement is noticeably heavy during takeoff checks and depending on how theyre mounted, they can bang into the knees, too. Knowing this ahead of time, you can get out of the way, but its still an annoyance.

RAM also makes a unique seat-rail mount that clamps to the floor between the two seat rails. (Retail: $120.32) Its intended for Cessnas, but it would fit any aircraft with similar seat rail design-basically a small steel I-beam shape with holes drilled for the seat locking pins. As shown in the photo, the clamp works by inserting a tab under the top lip of the I-beam which gains purchase against the rail with a thumbscrew.

A flexible stalk-fitted with a rubber ball at one end-then threads into the clamp. In the Skylane, this places the iPad just above the seat level of the co-pilot seat. The stalk has a bit of sway to it, but its basically a solid mounting method.

Still, there are a couple of concerns. First, the co-pilot will have interference with it no matter how far aft the seat is kept. And theres no chance of the seat being slid fully forward. This argues for the seat rail solution being best for the solo pilot.

Having the iPad mounted that low is an acquired taste, in our view. Its certainly viewable, but some might not like looking that far down for long periods. Last, it has to be positioned carefully to avoid banging it during a control check. The flex stalk helps.

RAM has a couple of other options for light GPS units, if not the iPad. One is a glareshield mount that consists of a steel channel that slides over the lip of the glareshield and tacks in place with a couple of thumbscrews. (Retail: $35.84.) The socket arm then attaches to the rubber ball, thence to the GPS.

This is, in some ways, the ideal mount option, albeit one that can obscure the panel. However, the glareshield lip is too flexible to support much weight. It was just able to hold the weight of the iPad, but the 696 would be out the question. Were also not sure how secure this arrangement would be turbulence. It would be better suited to a lighter GPS, in our opinion. Although supporting it with a supplemental bracket might be an option.

Another mount we tried was RAMs suction base, which sells for $15.77. These consist of a suction cup with a mechanical cocking lever that pulls the cup firmly against a smooth surface, likely to be a windshield or window in the aircraft.

The suction is hell-for-strong and more than capable of supporting the iPad, although probably not the 696s 2.1 pounds. As with the glareshield mount, were not sure how well it would hold in turbulence. Positioning on the window or aft section of the windshield is good for viewability, but does produce a blindspot for

Were aware of two kneeboard type products for the iPad, which take an entirely different tack on where to put this useful but a bit overlarge device.

In our review of the iPad in the July 2010 issue, we mentioned a metal kneeboard design from www.forpilotsonly.com that resembles one of those aluminum folding clipboards flight schools sometimes use to keep track of aircraft hours. The iPad slips into the metal housing and a hinged cover folds open to allow access. To write on a pad, you close the cover to protect the iPad. We found it performed as advertised, but it doesnt help much with the annoyance of having a large thing in your lap during flight. In some aircraft, it may interfere slightly with lock-to-lock yoke movement.

As we go to press, the company has released a new and improved model called the iPro Aviator which works on the same design principle, but appears more refined and has a molded back to fit the leg. It sells for $149.95.

Another solution for the kneepad arrangement is another new iPad product called the MyClip Thigh available from www.tietco.com. This one is the essence of simplicity. Its just an elastic strap with two clips that fit to either side or the top and bottom edge of the iPad. As we go to press in early October, the device is just going into production. For $39.95, we would deem it to be a good value if the

kneeboard option appeals to you. (It doesnt to us.)

Coming full circle here, the iPad is simply too big for the small cockpit, but its not too big to adapt to it. It simply requires some compromise and getting used to. Where to place it-or the GPSMAP 696-is a matter of personal taste and tolerance. Our preferences rank like this: RAMs yoke mount, the seat-rail mount, no mount at all and, last, the kneeboard option. Theres nothing wrong with either of the kneeboard designs; we just dont like larding the cockpit up with gadgets to write on when a simple paper pad or Post-it note will do. Your tastes may dictate the opposite opinion.

Best of all worlds for either is AirGizmos panel mount, but this will be a daunting challenge for either of these large-display products in a certified airplane. It may be impossible to find enough panel real estate without the ruinous effort of rearranging the primary stack. And after all, the iPad is supposed to be a sophisticated, low cost option, right?