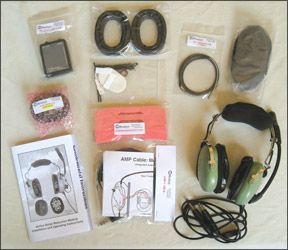 The world of noise-canceling headsets is largely ruled by the high-end units like the Bose X and Lightspeed Zulu. If pilots baby their ears, it seems they go for the best they can buy. But theres still a place for good deal on ANR, be it for backseat passengers or just to stretch your own flying dollar.

Headsets Inc. offers a drop-in module that fits a wide range of existing headsets and helmets. OK, its not quite “drop in.”

Some wire clipping and soldering is involved. The company also sells complete headsets with their ANR installed headset, and they revived the DRE Communications line of headsets, which includes one with ANR.

Do It Yourself ANR

The most spendthrift way to go is to upgrade your existing headset yourself with one of the kits from Headsets, Inc. Theyve been selling these same basic kits for about 15 years, with periodic improvements over time. For example, the latest kits use a new foam that both improves the passive noise reduction of the headset (i.e., how much it blocks with the noise canceling off) and removes the need for the adhesive to hold the new ANR modules in place.

When you order, youll have to tell them which model you have and theyll put the right parts in. The base price is $169, which includes everything you need short of wire clippers and a soldering iron (even the solder is included). Some Peltor headsets and helmets require a special kit thats $189.

Options may ratchet the price up a bit. The auto-shutoff battery box is a $10 upgrade to the kit price. New mic and audio cables that have the power supply to the battery built in (the AMP cable its called) is an extra $19. We had both of these add-ons and would recommend them as a good value for ease of the install and lifetime of the headsets 9-volt battery. Alkaline 9-volts last about 15 hours of use in the unit, which isnt terrific as ANR systems go. But one user told us he gets over 100 hours of use from a lithium 9-volt in his system. And the lithium 9-volt is lighter (course it also costs $7 a battery). There is also an option for panel-mount power.

The results of the upgrade flat-out wont match the performance of a purpose-designed ANR headset-you cant turn your old David Clark 10-40 into a Bose X. But you can get significant relief from cockpit noise with minimal loss audio quality. In fact, for many old headsets, its probably a gain. The sound in the unit we tested was the tinniest of any of the

ANR units weve used. If youre an audiophile who likes Brahms while cruising, wed suggest elsewhere. Its fine for normal cockpit communications, however. The company claims 20 dB of canceling at the key frequencies.

Because the 10-13.4 we tested used the older foam, its passive noise-reduction is now terrible, so the headset is functional with a dead battery but not remotely quiet. The mic quality and headset fit will be whatever you started with. That means the upgrade makes more sense if youve already invested in better earseals and a comfortable headband than if you still have the $99 special you got right after your first ride in a Cessna 150 and havent used in 10 years.

The system comes with a three-year warranty. We found the company quick to respond to inquiries and helpful during the install. If you like the idea of the upgrade but dont relish the job of installing it, the company will do the job for an additional $50 ($75 for a helmet).

A rather gaping hole in the headset market has been an ANR headset for children. Headsets Inc. jumped into that gap by taking an AvComm childs headset and adding their ANR to it, as well as a few of their popular upgrades, such as the ComfortTop headband (which one of our child testers dubbed “the nice velvet top”).

The two key features of a childs headset are a smaller headband, so the earcups dont fall below the jaw, and a shorter boom on the mic. Most full-size headsets require bending the mic boom partway back on itself to get consistent results (sort of important when a little voice in the back says quietly, “Im not feeling so good.”). The headset also has only one volume control with a really big knob. Experience has taught us that complex volume controls and young kids are a

We got some actual children who are used to flying with scrunched up adult headsets and asked for their opinion. The small-headed in our group said the kids headset was the most comfortable, hands-down. But he might have also liked it because it was red. It definitely fit him best. For older kids (even well pre-teen), the fit might be too tight. So its a matter of how many years youll be flying with the kids to judge the investment. The complete unit is $349. You can also buy the original headset for $100 and upgrade it yourself if youre so inclined. Headsets Inc. is working on a new kids model due this fall.

The company sells its own headset with ANR, branded as the EM-1, for $399. They also took over the formerly-defunct DRE line of headsets. The DRE-6001 is the flagship model, and the only one with ANR. It sells for $462.95.

The EM-1 and 6001 use the same speaker system you would get with a kit so theyre rated at the same 20 dB. The real differences between the two units are that the 6001 has a wider steel headband (so the Comfort-fit top isnt an option), different earcup designs, the volume controls on the earcups are not indexed and that it has a different microphone on a lighter weight boom. Both headsets use a rugged, steel-band top and beefy cables that we expect would stand up to the

We tested both these headsets on the ground and in flight, but we didnt have access to a full lab like we have been able to secure for some other reviews. That means we have more anecdotal data than objective. Both headsets performed roughly the same, but we thought the DRE 6001 seemed to have a better mic but worse passive noise canceling. The DRE headband pad we also found uncomfortable after long periods of wearing it. We also dont like the separate volume controls on each earcup as it requires switching hands around to set the volumes. However, it is easier to reach up to your head than fumble down the cord for the volume sliders on some headsets.

Given that these two headsets are so close in design, we question why someone would spend an extra $50 for the DRE model. But carrying that logic further, we have to consider budget ANR models like the GCA ANR-II, which sells for $249 and is really the old Lightspeed QFR-X/Cc model rebranded. Weve found these to be excellent headsets with features like cellphone/music input and good total noise reduction. They have less active noise canceling than the EM-1 or 6001, but more passive. That might be a plus with a backup/passenger headset that you pull out only to find a dead battery.

Those super-budget ANR headsets arent as rugged as the EM-1 or 6001, however. They wouldnt be the right choice for daily use. And the EM-1 is still half the cost of a Lightspeed Zulu or two-thirds the cost of the new Lightspeed Sierra. And the ANR kit added your existing headset is half of that again. So theres certainly a place for these units in the full headset spectrum. If youre looking for ANR thats rugged, or fits into the headset youve loved for years, these products are worth a look.