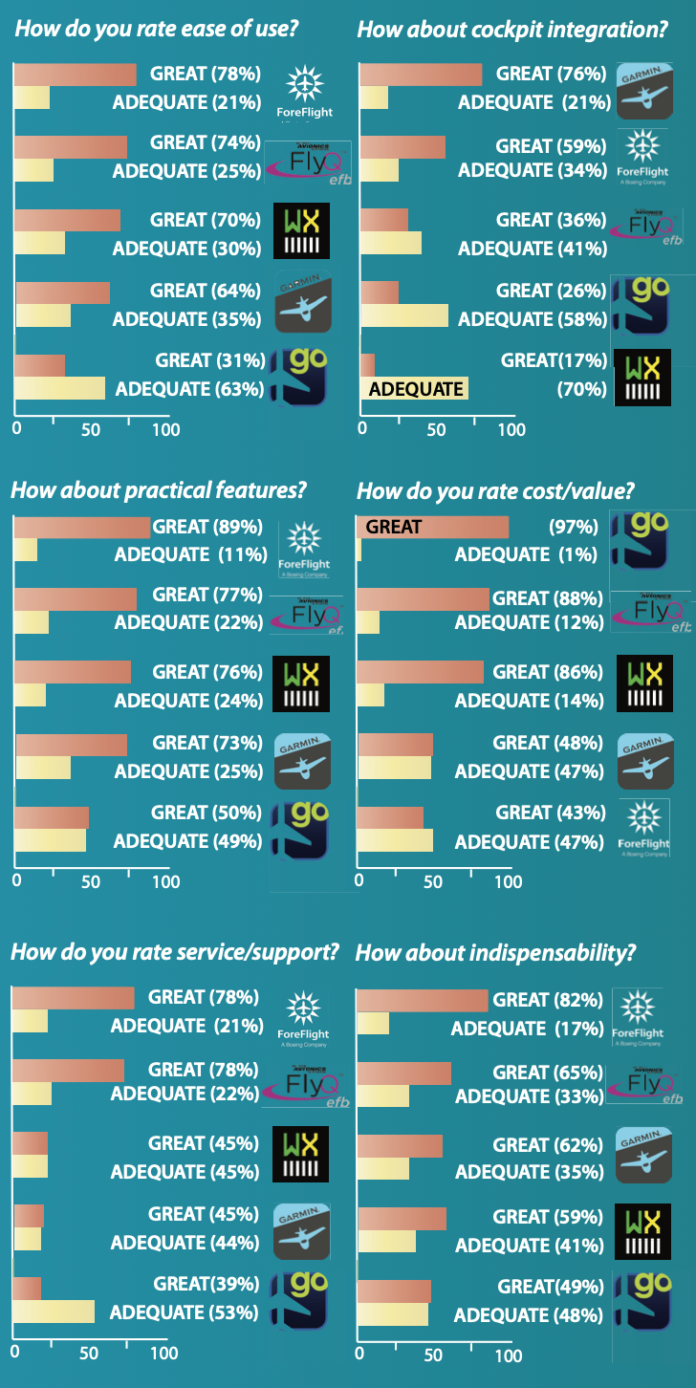 What do pilots value in apps? The chart and comments at right provide a basic road map on how users evaluate what apps do and how they do it. The data was gathered from a survey returned by 984 users  queried through our online sister publication, www.avweb.com.

In the July 2020 edition of Aviation Consumer, we reported on the hardware side of the equation and in this report, we’ll rank the applications based on reader responses. In the interests of sanity, we’re examining only the top five navigation and planning apps by market share.

As noted in the companion article, our survey overlooked two: Avare, a free Android app, and iFly GPS. We’ll include those in the next survey. A word on the graphs. These may not total 100 percent because in the interests of space, we didn’t plot one evaluation option: Kind of lousy. It had too few responses to be significant.

For now, the data shows that ForeFlight can fairly be called the top app, both by market penetration and user evaluation.  It finished number one in three of the six categories we queried, tied in one and did well in a fifth.

For overall ease of use, ForeFlight and FlyQ are nearly equal and in service and support, they finished in a dead heat. Apps are constructed these days to minimize the need for support, but some users still require it. Pilots said ForeFlight did a good job of it, but a few complained that it’s available only through email.

ForeFlight users are enthusiastic loyalists of whom 89 percent rate it highly on practical features, which turned out to be the second highest favorable percentage for any category we asked about and by a fairly wide margin. ForeFlight also gets high marks for offering continual upgrades and new features.

However,  this turns out to be a two-bladed axe.  As apps reach for more task doing, they become more complex, harder to use and what many pilots described as feature bloated.  “It is becoming a bloated piece of software that is no longer tailored for the GA pilot. It is becoming the mirror of its owner,” said one user, referring to the fact that Boeing now owns ForeFlight.  Several others mentioned the Boeing connection as a negative.

Still, users stick with the app because it does so many things other apps don’t  and if you keep up with it, it’s not difficult to use, despite many layers that hide things where they can be hard to find. By a wide margin—like 17 percent— ForeFlight users rank the app as absolutely indispensable.

One consistently solid performer in our survey is Seattle Avionics’ FlyQ EFB app.  It finished second in five categories and third in cockpit integration. Users like it for having an appealing combination of the right price, ease of use and high-end features.

Where FlyQ fell down was in cockpit integration, which is where Garmin shines with the best rating, again by a wide margin. No surprise there because the Garmin Pilot app is cannily designed to look like Garmin’s panel-mount avionics and it interfaces with the built-in boxes through the Connext wireless network.

Users of other apps cite  this as a complaint because Garmin hasn’t been generous in letting its avionics play with other devices and apps. This may partially explain why Pilot finished near the bottom in so many categories.

Just operates easily and has every feature I require. It has been my EFB for many years. Tracks my flights, takes care of my logbook, even use its track function from time to time to send to a student for their enlightenment.—Bobby Picker

Does everything I need, can access it from iPhone long before reaching airport.—David Hill

Developers think the way I do. Works as expected.
—Mike Radomsky

Starting to get too big.
—Sidney Tinsley

New features always come at an increased price. I feel like I joined a book club. —Name withheld

Runs only on iPad.—Eddie Storey

Two touches gets you everything you need. Quick and easy.

Features to cost ratio is excellent.

Frankly, too many options. When

used in turbulence I never know what my touch will call up.

There are a couple of minor bugs that are a bit of an annoyance. 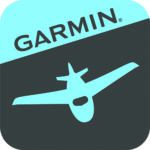 Number of practical features delivered with ease of use and performance efficiency.

It works on Android.—Stephen Floyd

Trails ForeFlight with features. Needs to the ability to annotate charts or maps on map page.

Too vertically integrated, does not work with a Stratux.—Scott Olson 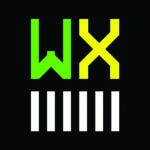 It’s simple. Flight planning is easy, and it gives the things I really need with no muss or fuss: current heading, heading to my next waypoint, groundspeed, distance to go, traffic, all overlaid nicely on a sectional.

Easy and intuitive navigating the app. Free for CFIs and military veterans.—Name withheld 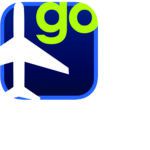 It’s got all necessary functionality and  it works.—David Johnson

The app essentially is just a browser window for the flight plan filing. It does have an offline version within the app, but it’s not great. Would like it to integrate runway and airport NOTAMs into the approach chart view like ForeFlight does.

Economical while adequate for my needs. Up-to-date charts and IFR plates at no cost.—Name withheld