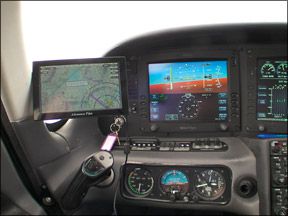 There is no perfect cockpit GPS. Some folks want a big screen; others need portability. Some want all the frills and some just need the essentials.

The iFly 700 by Adventure Pilot is targeted at the big-screen and essentials crowd. The unit boasts a seven-inch screen in a package thats only 7 1/4 x 4 1/2 x 3/4 inches and a diminutive 0.8 pounds. But thats partly because it has no internal

battery. More on that in a minute.

What the iFly does best is what it does right after startup: display scanned charts. The screen is crisp and readable and the charts can be zoomed in and out by on-screen buttons. It renders charts quickly enough to avoid annoyance. The aircraft position is superimposed, as well as any flight plan. As these are scanned charts, they are only presented north-up. Panning the charts is a matter of sliding your finger on the touchscreen in style of an iPhone/iPad. The hardware has a good feel under the fingers and we rarely saw a screen touch misunderstood by the system.

Changing charts is equally simple. Tap the Mode on-screen button and choose from sectional or low en route charts, as well as three versions of a vector (computer-generated) maps. We found these vector maps of almost no utility as they display less data than the scanned sectionals without taking advantage of the display options of vector charts, like track-up

viewing or the options to customize how data is layered.

On-screen buttons tastefully dim when not in use. There are also user-configurable data blocks for things like altitude and groundspeed, as well as a nice heading tape at the top of the screen. The iFly has descent flight plan management with an on-screen keyboard for easy waypoint entry. You cant enter Victor airways, however.

While easy, this menu-driven system is tiresome after a while. Nowhere did we find this more frustrating than when loading

instrument approach plates. The iFly offers NACO approach charts and airport diagrams, which are viewed from the airport information page. Getting to a specific plate means a minimum of five screen taps.

That wouldnt be too bad except that if after looking at the RNAV Rwy 07 you want to see the ILS Rwy 25 for the same airport, youll have to start the process again. There is a history button that lets you quickly view a chart once youve called it up the first time. History also makes a functional way to toggle between a plate and the en route chart.

The screen is amply wide to view the approach plate full width and scroll top to bottom. But the plates are not geo-referenced, so you wont see your position on them. The version we tested also lacked the NACO takeoff and alternate text information that doesnt appear on dedicated plates. Adventure Pilot says these will be added this summer.

Since the iFly has no internal battery, it must be connected to ships power or the included battery pack (actually a USB power supply). This connection can be done in series on 12-volt systems (cig lighter to power pack to iFly), but its either-or on 24-volt systems. We think this undermines the iFlys utility as a backup during complete electrical failure. Battery life is good at four hours off a full charge.

We also have issues with iFlys data update system. Owners of the iFly get login and password to the iFly website where they can create an update package to download. This package includes current TFRs and METARs for the U.S., as well as any software updates. No issue there. The problem is that the user must also check off each sectional and en route chart they want updated, as well as each state they want for approach plates. VFR Sectionals have a filter to at least show whats new, but theres no such convenience with the IFR publications.

That might be fine for a local flier downloading one IFR chart and one states plates. But for our tests in the Northeast, this resulted in finding and checking a dozen boxes (scattered about the alphabetical listing from Connecticut to Vermont) and a download that was 1.7 GB. There is a map to help select charts, but its not clickable to select items. Its only there for reference. The system could seriously benefit from a smart download manager. Once downloaded, the package is put on a USB stick that connects to the iFly. The update installs relatively quickly on the GPS.

One thing we cant complain about is the iFlys price: $499 + $69/year for all data updates. Theres also a 30-day money-back guarantee.

Its hard to peg a competitor for the iFly as nothing quite hits the iFlys big size plus its stripped-down feature set. The AV8OR Ace is similar in scale, but far more sophisticated, with dozens more features like terrain awareness and datalink weather. Its also almost four times as expensive. If your perfect GPS is big, yet simple, the iFly 700 is worth a look.