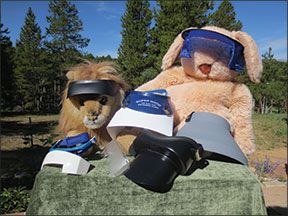 Hoods for practicing IFR are like umbrellas, tough to store and hard to find when you need one. We’ve used everything from duct tape on safety glasses through a folded sectional jammed under a baseball cap to a narrow strip of cardboard along the bottom of the pilot’s windshield on a DC-3 (it works perfectly). Other than the DC-3 system, we prefer store bought, and we’ve used them all.

We examined seven commercial IFR hoods for comfort, bleed over of view outside (one peek is worth a thousand scans), ease of scanning the full panel, ease of getting it out of the way for a VFR landing and overall functionality. We found that price was not an indicator of value.

Pilots who do not wear glasses have a large choice of good hoods; the selection for single-vision glasses wearers is good as well. For the bifocal and trifocal set, the selection is small, but the choices are good.
For those who don’t need glasses or just single-vision lenses, the winners were the Jiffy Hood, JeppShades and Foggles; for bifocal and trifocal wearers, the Jiffy Hood came in first, with the Super Hood as a good second choice.

We did our evaluation flights in a Cessna T210 and Beech Bonanza with pilots of varying backgrounds and experience.

Ratings
The numerical ratings given by our reviewers (with 1 the lowest and 5 the highest) are shown on the table on the next page. We found that the JeppShades and Viban IFR Hood could not effectively be worn over glasses, so their ratings are without glasses.

Jiffy Hood
At $8.10 through Amazon.com, the Jiffy Hood is a view-limiting device reduced to its essentials—an elastic headband snapped to a curved piece of plastic. It’s been around a long time because it’s simple, inexpensive and it works. Downsides are that it takes up nearly the most storage space of the hoods we examined, and you have to remove your headset to put it on—although that’s required for most.

It does not completely block the outside world on the left side, but it ranked high with our reviewers because they did not have to move their heads much to do a full instrument scan. All liked it—especially those who wore glasses (or just sunglasses).

One reviewer told us he’d had a terrible time flying precisely during an IPC because he was using Foggles and they blocked the area on his glasses best for focusing on the instruments. During his next IPC, he wore the Jiffy Hood and had no difficulty focusing on the instruments. He did so much better flying the airplane that his instructor commented on it at length during the debrief.

Foggles
Foggles were a revelation when they came out several decades ago. They quickly replaced the standard, long-billed hood and were, rightfully, hugely popular. Their success seemed to trigger a realization that there was a market for different view-limiting devices, which has been nothing but good for pilots.

Foggles are easy to store—most models fold like glasses into a case that can be carried in a pouch. We saw various prices, depending on suppliers, but $17.66 at Amazon was the best.

The good: easy to put on or take off, lightweight, work well with single-vision glasses or sunglasses, not much problem with them blocking the view outside the airplane—any view leaks can be easily fixed with a piece of tape.

The bad: internal glare can be disconcerting and scratches that build up over time can make it worse. Some of our evaluators who had bifocals or trifocals had a great deal of trouble with Foggles and did not recommend them.

ASA Hoodwink
A fabric hood that folds into an amazingly tiny pouch, the Hoodwink had our reviewers in stitches and saying that it looked so funny they were embarrassed to wear it. Priced at $14.99, it uses fabric stretched around a stiff wire oval to create what looks like a flat golf visor with two fabric swatches that make one think of blinkers on a horse.

It proved comfortable, but was not effective in blocking the view outside the cockpit. The cabin air vents caused the fabric flaps to flutter around. The Hoodwink was, however, quite good for those with glasses and it’s easy to push up out of the way when it’s time to look at the runway at the end of the approach.

To store, the wire frame must be coiled in a fashion similar to the way the wire mouth on a hot air balloon envelope is coiled on itself to make three loops. Some had difficulty with the process—it’s an art—and eventually the wire frame bent.

JeppShades
Looking something like an oversize set of clip-on, flip-up sunglasses, JeppShades feature a headband with a Velcro closure that holds the Pince-nez-style frames on your nose. The view-blocking visor easily flips up or down—however, the attachment is shaky. In normal handling, the visor came away from the frames several times, leading different reviewers to fear the unit had broken.

The JeppShades came with a warning that included, “JeppShades are not designed for optimal use with eyeglasses.” We agreed with the warning—they were unusable with glasses. The warning was not included in any of the advertising we saw; an unacceptable oversight, in our opinion.

Our reviewers who did not wear glasses or sunglasses rated JeppShades a close second, overall. They said they could see the “six pack” well,

Francis IFR Hood
At $22.85 from Aircraft Spruce, the Francis IFR Hood is a compact, serious view-limiting device that reminds one of a set of padded safety goggles with a set of binoculars on the front.

It proved to be the best of the bunch when it came to blocking the view outside the cockpit and focusing on a specific area of the panel. However, it was graded down because of the head motion required to do a full scan. While it can be worn over glasses, our bifocal and trifocal users did not recommend this hood at all.

Super Hood
While we look at any product with a prefix of “Super” with a jaundiced eye, the $26.95 Super Hood proved popular and one that got a very good review from a flight school that has used them for years. It is a plastic golf visor with a view-limiting plastic hood that clips onto the bill. Donning and doffing the hood is easy.

It was ranked average in preventing intrusion of the view outside—both to the side and over the panel, but high in the ability to scan the instruments easily and doff quickly when needed. One of our reviewers said the plastic visor messed up the noise-canceling system of his headset by pulling the ear cups away from his ears and generating feedback in the system.

The flight school we discussed the product with said that, in time, the sides of the hood broke off, but were easily repaired with tape, and the visor eventually broke, so it was replaced with a Detroit Tigers baseball cap, which proved more comfortable than the plastic visor.

Glasses and sunglasses wearers gave this hood high marks. We were told that caps representing other sports teams were acceptable.

Viban IFR Hood
For $46.74, $15 more than the next most expensive hood, we expected the Viban IFR Hood to max out the scores. It didn’t. It cannot be worn with ordinary glasses or sunglasses. For the non-glasses set, it was ranked high for comfort and did reasonably well at blocking the view outside, but not as well as JeppShades or Francis Hood—the $8.10 Jiffy Hood was as good.

To our surprise, the designers of this expensive hood recognized the shortcoming and included some confusing instructions and a piece of fabric for the user to attach to the hood to help shut out the world outside the cockpit. One reviewer referred to that as cheesy.

Conclusions
If you have a place to store it, we recommend the Jiffy Hood as an inexpensive, workable hood for everyone. If you don’t need glasses, we suggest JeppShades or Foggles (OK for single-vision glasses) for their ease of storage and use. We think the advertising for JeppShades and Viban should make it clear that glasses wearers should not buy them.

Finally, although our reviewers thought it looked “dorky,” the ASA Hoodwink is good in a pinch and it stores in a tiny area.