For the majority of us, earbuds have become a way of life. So why not try earbud aviation headsets? That’s what we did with three of the latest models from Bose, Clarity Aloft and Faro Aviation.

While all of them succeed in providing a certain amount of freedom compared to over-the-ear models, they won’t work for all applications.

Here’s how they held up in our less-than-gentle long-term shakedown. 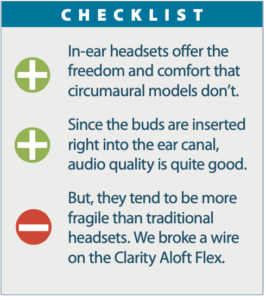 Faro Aviation makes a variety of budget-priced headsets, and the lineup includes the $389 Air in-ear model. Weighing 1 ounce, we were initially impressed with the Air’s comfort and overall build quality. That didn’t change in our long-term use, and every evaluator that we handed them to seemed to agree.

It’s easy to compare the Air with Clarity Aloft’s offering, and we still give the Air a slight edge in wearability and overall comfort. One reason we like them is the ability to customize them to the head.

On the Air, there aren’t slide adjustments to the metal headband and earloop frames. Instead, you simply bend the metal (expand or contract) to get the right size for your head. We’re still cautious about bending these things, but Faro said early on that you won’t break the structure by making these adjustments, and if you do, the company will exchange the set. We haven’t snapped the frames yet.

But there are areas to use caution. For one, don’t yank on the speaker wires when adjusting the earloop. We were usually able to achieve a perfect fit every time.

The Air is a passive set, but Faro claims that it provides up to 50 dB of noise reduction. Check that against the Clarity Aloft, which is rated at 29.5 dB. But some evaluators dinged the set for not taming the noise in the cabin of both a Cherokee and a Piper. But there’s a caveat.

The performance of any in-ear model is greatly dependent on the fit of the slow-recovery composite foam earplugs. Faro provides two sizes to choose from: medium (Faro says the medium fits the majority of users, and after our long-term trial, we agree) and large. Both are designed slightly longer than a typical earplug to fit deeper into the ear canal. We still wonder if shallow, fatter plugs might work better, perhaps creating a tighter seal around the outer perimeter of the ear.

We continue to like the Air’s Electret microphone. Modulation is crisp, it’s easy to precisely place it in proximity to the lips and most important—it always stays in place.

What’s still missing from the Air is a wireless Bluetooth interface for phone calls and entertainment. Who wants to plug in with a patch cable these days? Not us. Contact the company at www.faroaviation.com. 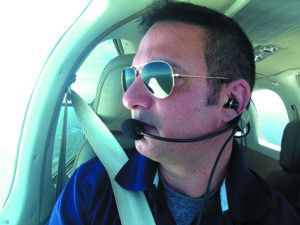 Our impression of the $995 Bose ProFlight 2 in-ear ANR model hasn’t changed since we used the first-gen ProFlight. It probably isn’t going to work all that well in typical piston-powered cabins, it might work in some turboprops and should work pretty well in a wide variety of jets—which is the target market. Bose told us that it’s selling more ProFlight models for airliner applications.

In our own use and based on reports from others who use them at their day jobs, Bose has succeeded with overall comfort, plus decent performance in turbofan cabins. It also made some improvement in the second-gen ProFlight that as far as we can tell in our trials has solved some quirks, including one with the set’s ANR tap control. Double-tapping a finger on either one of the earbuds puts the set in a talk-through mode, which works when the headset is in the medium or high noise-canceling profile. The idea is to enable better communications outside of the headset. 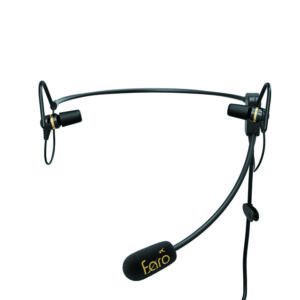 With the first-gen set, we experienced some situations where the tap-through is activated uncommanded during landing and even on the takeoff roll on bumpy runways. Bose set out to fix that on the Series 2 and in our estimation got it done. We also like the winglets on the ProFlight’s microphone boom for better alignment. Bose made some improvements to the set’s Bluetooth circuitry for better audio response, although we couldn’t really tell a difference. In Bose tradition, the audio quality is pretty decent.

If you still have a first-gen Pro-Flight, we suggest upgrading. It’s as easy as swapping the downcable. Visit www.bose.com for more.

We liked the Clarity Aloft in-ear passive headset so much we bought a set for ourselves several years back. It’s been a stellar performer. While fully accepting that it wouldn’t offer the same level of performance you’d find with a flagship noise-canceling model, we like the Clarity’s design and good-quality audio. After years of hard use, we can’t break it.

That’s why we were anxious to compare the set with the company’s $775 Flex. The weight on the head is 1.35 ounces, compared to 1.5 ounces for the non-flexible models. No, that’s not substantial, but in the world of aviation headsets every little bit counts. Like the original Clarity, the Flex is worn over the ears and the securing band rests behind the head. But unlike the other models in the Clarity line, which use a stainless steel headframe, the Flex has an adjustable flexible band that feels less intrusive than the metal band. It also makes the set feel lighter on the head.

As for durability, we can’t give it the same thumbs up as the metal-banded model. We ended up breaking the plastic piece that secures the speaker wire in place. Nothing a little Krazy Glue couldn’t fix, but it’s something to be aware of if you’re rough on your headsets—and who isn’t?

Like the other Clarity models, sometimes the set’s canal tip foam earbuds come off the posts. It’s not a huge deal, but you better keep spares handy in the cockpit. They tend to roll into the dark abyss between the cabin seats, never to be found again. Clarity includes a tin of six pairs, which includes 12 medium (the most common size) and two each large and small buds. A pack of 12 (six pairs) replacement earbuds is $25. For some, the best performance might come with a different size bud in each ear. As we found when we originally tried them, for many of the evaluators in our long-term trial, the medium tips work well.

While the Flex offered decent comfort, we still prefer the solid headband design of the original. And if we had bigger nits to pick, it would be that the Clarity models don’t come standard with Bluetooth. You need an optional module.

As we said in the original review, we think buyers might expect a set priced at $775 to have Bluetooth as standard, but the Flex doesn’t. Instead, plugging a stereo patch cable into the entertainment input jack on the control module for piping in your tunes just seems too old school. Visit www.clarityaloft.com.