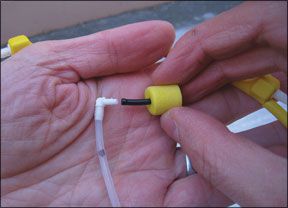 After a couple of hours, most people are ready to get out of a traditional, skull-clamping headset. Go eight hours in a sweaty cockpit, and wearing even a top-of-the line Bose A20 or Lightspeed Zulu gets old.

The alternative is an in-the-ear (ITE) headset, which is fundamentally a pair of earplugs with speakers and a mic. Dont knock earplugs. When inserted correctly, they offer noise reduction comparable to all but the best ANR headsets (We tried. Its true.) They dont clamp down on your head or cause sweat to bead up around

Still, they arent for everyone. They require more practice and patience than a headset you can just toss on. They arent for pilots who jump in and out of aircraft all day. ITE headsets are small and light, but the thin cords and tubes are more susceptible to tangling or breakage. And then theres earwax. It will get on the earplug tips (call them eartips) and require keeping a bag of them on hand to replace as needed.

The eartip material of choice is foam, which must be inserted into the ear canal and held there as it expands to fit. When we tried ITEs during a mid-Atlantic summer a few years back, we had to be quick to get the compressed foam in the ear before it expanded. This time it was during a Maine winter and we had to wait until our body heat warmed the things before they expanded at all. All vendors offer silicone tips that simply slide in as an alternative, but we think their noise attenuation is too poor to recommend.

Quiet Technologies has been at the ITE headset game for a while with several product variants. Their Halo is the current offering and is the lowest price of any of the ITE options at $349. Replacement eartips are $1.50 a pair. We also found it to be the most comfortable with three options for wearing: over the head like a headband, behind the head and over the ears (like glasses worn backwards) and loosely resting on the shoulders behind the neck.

Headband and behind the head were equally comfortable and worked well with glasses and hats. The metal band is wrapped in a soft plastic sleeve. The band can be shaped to fit the head better and offers a tighter or looser fit. It was easy to get enough pressure to keep the boom mic in place but keep it light enough to forget we were wearing it. The over-the-shoulder orientation would be fine for a passenger who was just listening, but the mic doesnt move with the head, so its not for someone regularly talking.

The Halo had excellent clarity of sound, especially for voice. ATC transmissions sounded more like live speech than radio when tried side-by-side with other ITEs in the same aircraft. We kept turning the volume down as the foam further expanded and sealed. Music, while still quite pleasant, seemed a bit clipped at the high and bass ends of the spectrum unless we adjusted the input to boost those. Music is only through the intercom as the Halo has no integral music input.

The sound tubes on the Halo are long and easy to get caught under the headband or snag on a seatbelt. We learned to insert the eartips such that the tubes curled and lay close to the head to prevent this. Phil McCandless of Quiet Tech says these tubes can be shortened an inch with minimal audio effect (in fact, it boosts the treble a bit).

The Halo was the most critical ITE in getting the earseal complete. Having a tube pulled out of even one ear made the radio unintelligible. Attaching fresh eartips is also a more delicate maneuver with the Halo than the competition. While not fragile, its clear a Halo wouldnt hold up to the abuse you could level on something like a David Clark. That said, Quiet Tech is a small company with excellent support and the Halo has a two-year warranty.

The Mach 1 is the most feature-rich offering, with a jack for music or cell phone connectivity (no Bluetooth, sorry), auto muting of music and intercom isolation. Isolation is for a passenger using the Mach 1 who doesnt his phone call shared with the entire cabin. The Mach 1 also has no headband. It fits over the left ear

like a cell phone headset. That alone is a big selling point for some.

Unlike the Halo or Clarity Aloft, which use tubes to carry the sound partway to the ear, the Mach 1 has speakers directly at the eartips. This gave the Mach 1 excellent sound overall and the best sound for music. It also had the best sounding mic-as good as any headset weve tried, in fact. The volume controller is about the size of a deck of cards and has a jack for connecting a music player or a cell phone (cables included), but these functions (and only these functions) require an internal battery. Lightspeed says the round CR2032 battery lasts 100 hours.

Lightspeed touts their no-roll foam that makes donning the headset simpler. While true, we felt this was a distinction without a difference once we got the knack of the other headsets. What we didnt like about the Mach 1 was that it was hard to get the earpiece to stay put on some heads. It would move just enough to put the mic too far away to pick up speech. Working with an instrument student with a head swiveling between aircraft traffic and watching their scan was the worst. No amount of repositioning the earpiece or the clip to hold the wire running to the controller would fix the problem.

For pilots who dont have this problem, the Mach 1 is probably the best ITE not requiring custom earmolds (see sidebar). But for those who do, the Mach 1 is a non-starter. The problem might be fixed by ordering custom ear molds, but that adds about $300 ($100 for the trip to the audiologist and $200 for the installation from Lightspeed.) for the to the Mach 1s $450 price. Replacement foam eartips

There are two versions of the Clarity Aloft ITE. We tried their $525 standard version, which differs only from the Pro version in the material for the headband, the fact that the Pro is TSOd and that the Pro costs $695. But if your cockpit requires a TSOd headset, the Pro is your only choice. Eartips for either are $25 for a pack of 12.

The Clarity Aloft headband is worn behind the head and over the ears only. You can bend the frame as needed to better fit your head, and there is an optional adjustment band that can put some clamping pressure on the band if you want it, or it can be slid forward to better grip the back of a smaller head. The eartips screw on to short tubes that dont snag or tangle easily. Overall the unit feels robust. Clarity Aloft must agree as they have a three-year warranty.

There is a music input on the volume controller, but it doesnt auto mute. Instead, its set so music input is always at a fraction of the radio intercom volume. This worked OK in practice, but it limits the volume-setting flexibility. Sound quality was good, but we think the Halo has clearer voice and the Mach 1 richer music.

Some testers reported the over-the-ear portion of the Clarity Aloft was uncomfortable or “heavy-feeling.” One had to remove it after two hours as it was too uncomfortable. We asked Clarity Aloft about this and they agreed some users experienced this, and a few had fashioned their own sleeves for the headband to

fix it. Jo Abbott of Clarity Aloft pointed out their 30-day money-back guaranty that allowed people to test this for themselves.

Actually, all three of these manufacturers offer 30-day trials, which is a real plus as ITEs are a different paradigm and take some getting used to. (You can keep the used eartips; no charge.) We think the perfect ITE candidate is someone who flies long legs where clamping pressure is an issue and ease of donning isnt-and who dont require the all-encompassing quiet and clarity of a Bose A20 or a Lightspeed Zulu. The ITEs still arent quite there, but they offer equal or better noise reduction than the most mid-level or lower ANR headsets.

A passenger who just doesnt like headsets is another candidate, so long as they understand how to put the eartips in. Children, who dont fit well in traditional headsets, are a third. The authors eight- and ten-year-olds strongly favored the Halo using the included small/pediatric eartips. Too bad he cant keep the test units.

For sometime passengers or kids, the Halo is squarely our top pick for an ITE headset. For pilots, or a passenger who must have private music or phone, wed lean to the Mach 1-if that person can get a good fit on the left earpiece. But even as a primary headset for pilots, we still think the Halo is a great value.