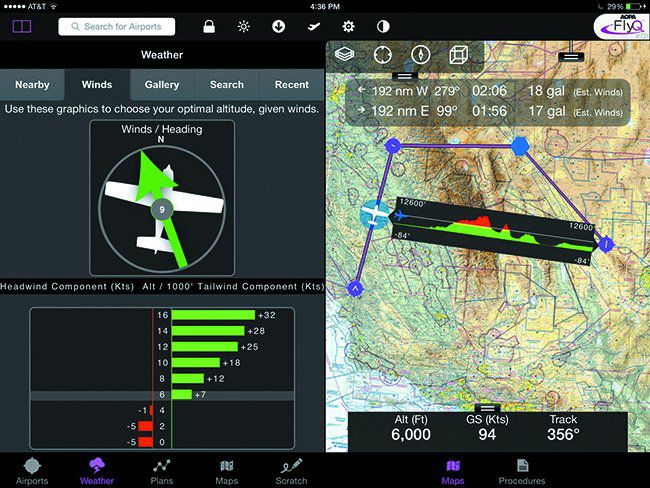 Although there was some pushback when AOPA offered its fee-based tablet navigation app, FlyQ EFB, there was enough to like, including an intuitive and shallow feature set and large onscreen characters. While Seattle Avionics owned all of the rights to the FlyQ EFB, AOPA was criticized for competing in the crowded app market.

Moreover, compared to popular competing apps like ForeFlight and WingX Pro 7, early versions of FlyQ EFB had a limited ADS-B interface and lacked some features that deterred existing ForeFlight and Wing X users from making the switch.

Seattle Avionics has taken over full control of the FlyQ EFBs marketing and distribution and were told the three-year contract with AOPA lapsed and wasnt renewed. Countering rumors that the app was dead, Seattle Avionics has been in the app business for 12 years and points out that FlyQ EFB earned a 4.5 out of a 5.0-star rating in Apples app store. Seattle told us it is committed to advancing the app to higher levels.

The FlyQ EFB version 1.4 is Seattles first upgrade since the disassociation with AOPA and is specifically made for Apple iOS 7 and iOS 8, although it will work with the older iOS 6, too.

FEW TAPS, MORE NAV
The latest version of FlyQ EFB retains the basic menu structure and simple design philosophy that we liked in the initial release. This consists of five major menu tabs at the bottom of the screen and a navigation bar at the top of the screen for controlling appearance, including split-screen view, screen brightness and the airport search utility.

Seattle Avionics Steve Podradchik believes it shouldnt take any more than one or two taps to get key information while youre flying. Thats why key navigational functions, like frequency searches, are accessed with limited screen taps.

On the other hand, he knows that its easy to unintentionally tap a function while flying in turbulence with an unlocked screen, so some map-related functions require double taps and many functions are accessed by swiping the screen, rather than tapping it. He also realizes that aging pilots struggle with onscreen font that are too small to read at a glance. As a result, the FlyQ EFB user has the option of quickly configuring the app with larger font sizes.

If youve been away from FlyQ EFB, youve missed a lot. Version 1.3 (introduced last January) was a major upgrade that included the addition of an enhanced ADS-B traffic function thats intended for easy recognition of immediate threats. For example, traffic tags are color-coded based on threat level and the tags have extension lines that depict direction.

A major new feature in FlyQ EFB version 1.4 is a bearing/distance measuring tool with the Terrain X-Ray function. Placing two fingers between points on the map creates a popup that shows distance, bearing and fuel burn, plus the straight-line terrain profile between the points. The terrain function uses common green, yellow and red colors and displays the maximum height of the terrain along the way. A one-finger swipe moves the measuring graphic around the screen as the function instantly recalculates distance, bearing and fuel burn so you can compare other routes for diversions, as an example. Fuel and time data is calculated based upon the reported winds aloft.

The rings and extended courseline feature enables the ability to see the distance and time between your current position and another object on the map. By turning on a set of measuring rings around the ownship, you can determine the distance and time between airspace corridors, for example. The courseline extends in front of the ownship and looks like a barber pole. The line can be configured based on time or distance and each segment in the line represents one unit. For example, if you configure it to look ahead 10 minutes, each alternations between segments on the line represents one minute of travel. Used with the ring function, the extended courseline lets you know precisely when the aircraft will hit the boundary of airspace.

When it comes to identifying the aircraft on the map, theres an interesting Aircraft Marker function that can be configured to display 12 different onscreen aircraft icons. First, the standard ownship icon was made 50 percent larger and can be configured in green and white, blue and white, red and white. There also the option of selecting fixed-wing or helicopter. The idea here is to create an easier identification of the ownship on the map, a treat for aging eyes.

Missing in previous versions, but added in version 1.4, is the FAA airport facility directory (AF/D) thats accessed in a dedicated tab inside the Airport tab. For off-airport operations (floatplane flying, for example) or for finding non-charted locations, users requested the new geographical latitude/longitude find feature. This is accessed via a dedicated latitude/longitude data field in the upper left corner of the screen to enter the coordinates.

Once the coordinates are entered, a dialog window appears and displays the distance and bearing to the point, plus an option for navigating directly to the coordinate or adding it to the flight plan. Tap on the coordinates in the dialog box and the map automatically jumps to that point.

Fly Q EFB is compatible with third-party interfaces including the Aspen Avionics Connected Panel wireless suite. A Send to Aspen command pushes the current FlyQ EFB flight plan to the Aspen EFD-series MFD where its then loaded into the Garmin GNS430/530.

New Takers
Seattle Avionics is hoping that these improvements will entice users of ForeFlight and Wing X Pro 7, to name a couple, to make the switch to FlyQ EFB. Now that AOPA isnt involved in the app, its anyones guess if more or fewer buyers will make the switch. But the addition of the plates-on-map function, plus the enhancements that make the app easier to use for the eyesight-challenged could be enticing, in our view. The configurable font size was an attention-getter when we saw a crowded demo in Seattles booth at AirVenture.

One nit we have is the apps incompatibility with Android devices, but Seattle told us that would be too difficult to change. As weve been reporting, Android hardware is gaining sizable momentum for cockpit use.

A major deterrent for buyers switching apps (or selecting one in the first place) is the incompatibility with choice portable ADS-B receivers. FlyQ EFB now supports multiple portable ADS-B receivers for FIS-B radar, TAFs, METARs and winds aloft. These include the Sagetech Clarity, all of the iLevil devices, the Dual XGPS170 and the SkyRadar DX. FlyQ EFB wont work with the Appareo Stratus. That alone could keep ForeFlight users from switching.

You can download a 30-day trial of FlyQ EFB at the Apple app store. VFR Subscriptions start at $69.99 and include VFR sectionals, Seattle Avionics airport and navaid ChartData, fuel prices and airport diagrams. Yearly IFR subscriptions, which include everything in the VFR package, in addition to geo-referenced approach plates and low and high altitude charts, are $119.99.