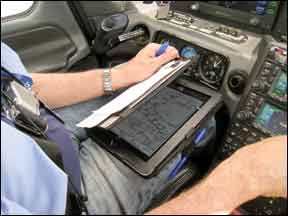 Fly with an iPad lying in your lap for about 15 minutes and youll wonder if there is a better way. The thing is basically terrific in the cockpit, but its, how shall we put this, big. Or at least big enough it covers the paper pad youre used to having on your thigh, or big enough in flops off your knees when you want it to stay put.

But big also means you might want it out of your lap, and thats the drawback with most of these iPad kneeboards. Sometimes you want a screen thats ready for the glancing, such as when flying an instrument approach, and other times you just

want it out of the way where it wont get its screen scratched.

To that end, any consumer case that wont slip off your lap could be all you need. (We have a $25 Bear Motion case that does the trick just fine.) A bit of Velcro may be handy if you want it to stay just so on top of your current kneeboard.

Another option is the MyClip from Tiet. This is just a leg strap with two padded clips on elastic. The clips grab either side of the iPad-either portrait or landscape-and hold it securely. However, its not so tight that you cant tilt it quickly to get a non-glare viewing angle. If you dont need the other trappings of a kneeboard (pen and paper, pockets for small items) then this is our recommendation. My Clip was designed for an iPad without a case, but you can make it work with some cases (including that Bear Motion), albeit a bit less securely.

At $40, the MyClip is pricey for such a simple gadget, but it works well. Its leg strap is a bit short, so thick legs might need an extender. We tried taking a case with a loop, like the HandStand, and hacking our own leg strap. It worked … sort of. Worth a shot if your case has such a loop for attachment.

The other plus of a setup like this is you can quickly don it or pull it off as necessary. If you want a real pad on your leg as well, though, you might do better

with a real kneeboard.

Many of our testers liked the SkyHigh Genesis iPad Kneeboard with the clipboard attachment. The basic kneeboard is really just a flip-open case (woven nylon, but attractive enough for daily use outside the aircraft) with a removable strap for your leg.

The optional clipboard cleverly adds on so that you can have the iPad on your leg and flip the writing area over the iPad when you need to. This keeps the complete system over one leg (right or left). We also liked how flipping the clipboard over protects the iPad when not in use or when quickly removed for landing. The Genesis keeps the iPad controls and charging port accessible.

The add-on design makes the kneeboard a bit thick, which may put it in the way of yoke travel. Its super secure, but that makes it hard to tilt if theres a glare. The strap is a bit short for thick legs. Theres a place for your pen, but no pockets, so youll have to stash your checklist and mints elsewhere. The Genesis case is $35, and the clipboard add-on is an additional $20.

The other tester favorite was Sportys Flight Desk, but it wasnt without flaws. First the pluses: It offers both iPad and notepad at once, has a few pockets for miscellaneous flat items and is stiff enough with a grippy material that strapping it

to your leg is optional. The iPad holder for the Sportys design is also loose enough that the iPad could fit in without removing a thinner daily-use case or protective skin.

Sportys also has a system to prop up the iPad at several angles. One tester pooh-poohed this feature until glare hit the screen in flight. He then used it and was sold on the idea. That pilot had a Cirrus, so there was no yoke interference issue, but the same design in a Cessna 172 meant the yoke hit the propped-up iPad for all but the tallest pilot (seat furthest back).

This leads to the biggest drawback of the desk: Its big. We think its a bit too wide for a Cessna 172 cockpit. It was fine in the 10-inch-wider Cirrus. The flight desk zips closed into a case acceptable for daily use (but you might need a bigger briefcase). The other miss with the Sportys design is theres no opening to charge the iPad, although you could cut one out.

The Flight Desk is $58. Sportys also sells an iPad Kneeboard for $40 that has just the iPad part of the Flight Desk and a flap on the right side with a few pockets. If you dont want the writing pad but must have some pockets, this could work. Just watch out for items in the pockets scratching the iPad screen when you close it.

This sounds clunky, but its actually the lightest kneeboard of all and super secure (really strong magnets). You can also quickly pull out the iPad to see something without glare and then drop it back in the case. Slick. The design also allows for charging while in the case.

The first Kneeboard C we tested had issues, the magnets were stronger than the glue that held them and there were some sharp metal edges. The replacement unit was much better. Both cases, though, suffered from falling into a V shape if you spread your legs at all. We think this was because of the smooth finish on the case. You can toss some flat items under the clipboard in the clamshell of the case, but theres no pocket.

The Kneeboard C might be a top pick, except for the price-$189, or with a custom graphic for an additional $29. Weve seen used iPads for that much. Its a cool system, but unless you need something that will stay put through an outside loop, we dont see how its worth that investment.

As we said, were not sure a kneeboard is the best way to fly with an iPad (also see sidebar opposite). If you do want it on your knee, a Velcro hack to your current kneeboard, a simple clip, the SkyHigh Genesis with the clipboard, and Sportys Flight Desk would be our recommendations-in that order.