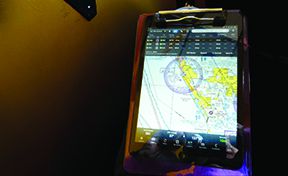 Apple’s insanely popular iPad has become the cockpit digital tool of choice for the pilot masses, but not without complaint. It’s a little too big and a little too heavy for convenient cockpit mounting and wouldn’t it be nice if it were a tad smaller? And that’s what the new iPad mini is—a smaller, more cockpit friendly version of the iPad.

But does that make it the perfect digital co-pilot? Maybe. But the answer really depends on what apps you prefer, how much you want to spend on this kind of technology and what you else you do with tablet computers. In our view, the mini is an improvement over the full-blown iPad, but there are enough what-if variables here to rule it out as a no-brainer purchase for everyone.

It’s the Size
With the exception of display resolution, the mini does what iPads and recent iterations of the iPhone do, sans phone, of course. But it does so at an overall size that’s becoming increasingly popular in the tablet field, the 7- to 9-inch format.  The original iPad measures 7.4 by 9.47 inches and is 0.5 inch thick. It weighs 1.5 pounds. The second-gen iPad shrunk the overall size slightly, reduced the thickness to 0.34 inches and trimmed the weight to 1.33 pounds. In other words, no real help solving the cockpit size and weight issue.

The mini, however, is 70 percent the size of the iPad. It measures 7.87 by 5.3 inches and is a mere quarter-inch thick at 0.28 inch. At 0.68 pound, it’s less than half the weight of the original iPads. That means the mini will easily mount on a yoke without blocking instruments or bumping your belly. Or, it can clip into a simple kneeboard, unobtrusively, without interfering with controls. It’s also light and small enough to suction cup to a side window or a clip to the glareshield, offering adequate display size without being obtrusive. So far, so good. But there are tradeoffs.

Lesser Display
Compared to the latest generation iPad with Retina and competition from the Android platform, the mini suffers on two counts. First, the overall display area is 6.4 by 4.74 inches, which is about 70 percent the size of the previous iPad versions. Obviously, if you want a smaller form factor, you’re going to get a smaller screen, so there’s less real estate to show plates, charts and weather data at large size. This is hardly a deal breaker.

Where the mini is less impressive, however, is display quality. The mini has a 1024 by 768 pixel display for a total of 786,432 pixels or 163 pixels per inch. It’s not that this so bad, mind you, it’s just that the competition is better. In the small tablet segment, Google’s Android-capable Nexus 7—which is $130 cheaper—has 1.02 million pixels at 216/inch. Apple’s own iPad with Retina display has 264 PPI and 2048 by 1536 overall resolution. What this means, disappointingly, is that although Apple is known for crisp, colorful displays, the mini is, if not a step backwards, a lateral sidestep.

But does it matter? For most cockpit functions, we would say no. High pixel density is most obvious in text, but the mini’s text displays aren’t unreadable, just slightly pixilated. We noticed no objectionable pixilation in running ForeFlight’s various functions.

One other note about the display: For reasons not entirely clear, even to the tech press, Apple sticks with high-reflectance displays, meaning screen glare is a nuisance with the mini. An anti-glare screen protector is a must. The Android tablets, especially Google’s Nexus 7, have lower reflectance displays that are less annoying to use in high ambient light environments.

Otherwise, the mini has the same Dual Core A5 processor used in the iPad 2 and it runs IOS 6.0.1. Pricewise, the mini is attractive when compared to other iPad models, less so when stacked against the Android offerings. A basic 16GB mini with wireless but no cellular retails for $329. Doubling the storage capability escalates the price in $100 increments to $529 for a 64GB version.

How much storage do you need? If you intend to use the mini only for an aviation app or two, some music and an e-reader, 16GB is sufficient, but for another $100, the 32GB is a reasonable step up. As for cellular capability, if you’re already carrying a smartphone with the same app, why bother? The cheapest cellular-capable mini is the $459 16GB model and they go up in increments from there. But the wireless-only models don’t have GPS, so you’ll have to add that at $100 or so. (We like Garmin’s GLO remote GPS.) Even if you buy a cellular version with GPS, we like the remote add on. It’s simple to use and gives the tablet better positioning performance.

Given the pace of the product cycle, we think the risk here is less picking the wrong product than over- nvesting in the right one. You’re likely to replace whatever you buy within 18 months.

Cockpit Trial
In flight, there’s virtually no operational difference between a full-sized iPad and the mini, except the size. And that’s what this comparison is all about. As noted, we think the mini—or any iPad—needs an anti-glare screen, plus a case of some sort. That’s doubly true of the mini because it’s small and slick and easy to drop.

Out of the case, a simple clip kneeboard or even an office clipboard will do fine. We also tried the mini in a yoke and glareshield mounts from RAM and found these to be a vast improvement over the full-sized iPad, thanks to the mini’s lighter weight and smaller size. The mini looks like it belongs on the yoke; the iPad just consumes too much space.

The tradeoff, if there is one, is that everything on the mini’s display is simply smaller than it is on the iPad. Take an approach plate, for instance. On the iPad, a plate is still too small to read when viewed in full aspect. Pinch zooming to enlarge the area of interest, then finger scrolling around the plate addresses this.

If you do the same on the mini, you’ll scale a little larger but the results are the same. You can see as much of the plate as you need to, then scroll around to find what you’re after. We can’t see much of a downside to the smaller size against the considerable advantage of smaller overall size.

Similarly, other features, such as weather graphics or radar, text reports or documents, can be scaled up just as easily. We didn’t find ourselves squinting much, although there’s no denying the display is smaller. For ForeFlight’s menu icons, for example, it helps to know where they are by memory because they aren’t as easy to see.

Apple claims up to a 10-hour battery life for the mini, the same as for other iPad models. But in the cockpit, you’re likely to run the tablet at full brightness and an internal GPS will draw its share of battery capacity. We would guess five to six hours is more realistic.

Our mini ran for a couple of days of regular use running apps, e-reading and flight trials. One thing we don’t like is that the mini requires the new Lightning plug, not the 30-pin standard used by original iPads and iPhones. If you have other i-devices, that adds the nuisance of carrying two chargers until the upgrade cycles sync again and everything has the Lightning plug.

You can buy a $30 adapter to address this, but we’re disinclined to pay Apple that much for a product that ought to cost $9.95. Because of a built-in authentication chip, cheap knockoff cables may be less common than with the 30-pin connector. The mini does seem to charge rapidly, compared to the iPad.

Recommendation
Bottom line, is the mini a worthy purchase? This isn’t a simple question to answer. If you haven’t bought a tablet yet and are tilting toward the iPad for cockpit use, by all means consider the mini. We recommend against the iPad 2. We think the mini’s smaller size is simply superior for inflight use, hands down.

If you already own an iPad and don’t mind—or perhaps you like—its large size, the mini might not impress. If you have an iPad Retina, we suspect you won’t like the mini’s slumming display and we would advise waiting until Apple adds Retina or a higher res display to the next-generation mini.

Your preference in apps might drive the decision, too. Android apps aren’t yet at parity with Apple apps, but they’re getting there. If you’re not wedded to Apple-only apps such as ForeFlight, the Android Nexus 7 is simply a better value than the mini. It’s similar in size, albeit a little thicker, and 10 percent heavier.

At $199 for its basic version, the Nexus is not just a little cheaper, but a lot cheaper. The Nexus models also carry their own GPS receivers. We’ll do an in-depth comparison of the small tablets for aviation use in a future issue, but for now, we think the mini, while a good choice, won’t be the best one for all pilots looking for a cockpit tablet.