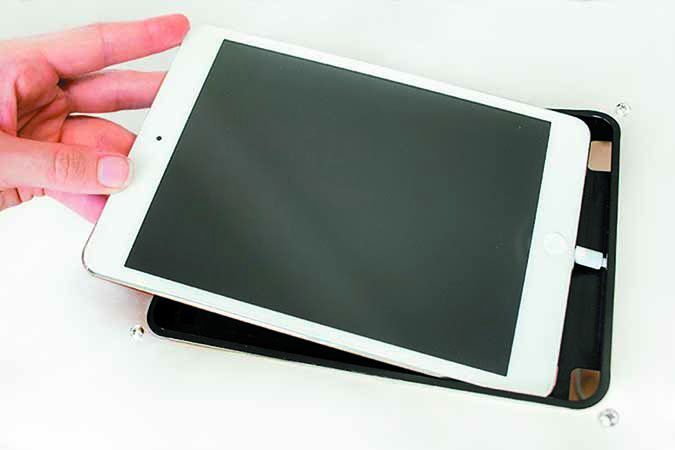 Does there breathe a pilot not using an iPad or tablet of some kind in the cockpit? We may know of one or two, but the rest of us confront this challenge: Where to put the confounded thing during flight? The aftermarket has provided in the form of more mounts, straps, clips, brackets, cases, bags and sleeves than an ordinary human can fathom, much less evaluate for purchase.

In fact, there are so many of these devices that we’re breaking them into two categories: brackets and systems for panel mounting and gadgets for strapping them to yokes, knees and the odd windshield or window. In this article, we’ll examine the panel-mount options, of which there are a surprising variety.

For those who worry about the legalities, the FAA has recently relaxed restrictions on semi-permanent cockpit mounts for tablets, even products that require a sizable panel hole, wiring or plumbing for cooling. These are generally considered minor modifications and although they require logbook entries, they may not require further documentation.

AirGizmos made its chops with a line of in-panel mounts for portable GPS units, most recently for Garmin’s aera series. The products remain a mainstay for light sport and experimental aircraft, many of which rely solely on panel-mounted portables for navigation and, increasingly, weather and traffic data, too.

For tablet and smartphone mounting, AirGizmos recently added a mount for the iPad mini 4 to products it already had for the iPhone 6 and 6 Plus and iPad Air line. As do many other manufacturers, AirGizmo also offers kneepad type mounts.

These mounts are of two types. The in-panel dock versions fit into the standard 6.25-inch width of a radio stack and present a flush appearance. For the iPhone, the device is mounted horizontally or vertically, depending on the panel space available. The mount, which is molded of ABS plastic, is fastened with screws passed through tabs on the back of the bracket. The phone or tablet snaps into place with a spring locking tab and can be easily removed.

Given that iPads have been known to shut down in flight due to overheating, the AirGizmo mounts have a round cooling port on the back that can accept the output of standard avionics cooling fans. While the cooling might not be necessary for the phone, we would recommend it for the larger tablet, whose display emits more heat. Both the phone and tablet mount have provisions to route a Lightning power cable and audio cable through the standard 3.5 mm jack. For panel docks, AirGizmo’s catalog covers the iPhone and mini, but not the iPad, at prices ranging from $79.95 for the iPhone to $129.95 for the mini. AirGizmos’ less intrusive solution covers both the iPad and mini line and offers quite a bit of flexibility in mounting. The AirMount—not to be confused with the iPad Air—consists of a custom bracket designed to fit into a standard empty instrument hole, secured with the four corner screws. The holder that carries the tablet then mates with the bracket to provide a secure mount. However, AirGizmo considers this a surface mount; the tablet stands proud of the panel, not flush with its surface. These mounts cover the full iPad line,up through the iPad 4 at prices ranging from $59 to $109. The AirMounts mounts can be configured to tilt the tablet slightly to improve viewing.

AirGizmo also offers a suction-mount option for owners lacking the vacant instrument hole. This mount has a strong suction cup equipped with a variable-length, adjustable arm and a quick disconnect for the tablet bracket. The $109.95 bundle includes the cup, the tablet mounting bracket and three arms of various lengths.

AirGizmo sent us samples of these products and we found that the kits are well prepared, packaged with the necessary hardware and are well illustrated with installation instructions and drawings.

Guardian Avionics is best known for its line of CO detectors, some of which are reviewed elsewhere in this issue. Earlier this year, it launched a complete series of iPhone and iPad mounts, including accessories such as power supplies and cabling.

Guardian’s iFDR series are all flush mounts and cover the entire Apple line, from the iPhone to the huge iPad Pro that we wonder how anyone could fit into a light aircraft panel.

These are designed a little differently than AirGizmos, in that they consist of a solid tray-type bracket that fits flush into a large opening cut into the panel. According to the drawings provided, a hole with radiused corners is cut in the panel and the mount installs from the back of the panel with screws at four corners.

Even for the iPad mini, this will require quite a bit of unobstructed space behind the panel and not just laterally. Although you wouldn’t necessarily have to use them, the Guardian mounts can include an optional USB power supply that connects to ship’s power. It mounts on a pair of brackets behind the mount and increases total depth to about 2.5 inches. Before purchasing one of these mounts, we recommend downloading the drawings from Guardian’s site and probing behind the panel to measure the potential mounting area. In some aircraft, we suspect the clearance won’t be available.

The tablet is held in place in the mount by a spring-loaded slider that also carries the male Lightning connector. To mount the pad, you insert the connector, then angle the pad into the mount and push it flush against the slider’s spring tension. To remove it, use three fingers to push the tablet against the slider, then ease it out.

On the opposite side of the mount, there’s accommodation for an audio cable that’s inserted in the same way as the Lightning plug. The iPad’s audio output or input for recording can then be tied into the ship’s audio system. As with the AirGizmo products, the iFDR mounts are equipped with a round port to accept avionics cooling air. We would recommend using it. The Guardian products appear to be well made, molded from ABS plastic and the website has complete documentation and drawings. Prices start at $99 for the iPhone ($299 with power supply) to $249 for the iPad Pro or $449 inclusive of the power supply.

FlyPad takes a different approach to iPad mounting and one well-suited to using the tablet as a primary information source in an experimental aircraft. But given FAA tolerance in allowing these mounts into certified aircraft, we see no reason not to consider it against the other mounts.

In concept, the flyPad mounts are similar to Guardian’s iFDR products. Indeed, they’re so similar that we’re compelled to report that flyPad plans to pursue an intellectual property case with Guardian, claiming that Guardian reverse engineered the flyPad product to design its own products. FlyPad first appeared in 2013. FlyPad’s patent, which applies to the slide-and-lock mechanism, is currently pending, but predates Guardian’s entry into the market. Guardian told us it wasn’t aware of the challenge.

Although they’re similar in principle, there are feature differences between the two products. FlyPad’s mounts are machined from solid Delrin while Guardian’s are injected ABS. FlyPad says the Delrin is more temperature stable and machining from a billet offers more flexibility to accommodate changes in tablet dimensions with evolving models.

Also, flyPad’s solid back allows the option of mounting two steam gauges in the mount itself, serving as a readily accessible backup available by simply popping the tablet out of the mount. It installs similarly to the Guardian design but requires less space and includes accommodation for the Lightning connector.

FlyPad’s Crew Feighery told us the flyPad mounts are slightly smaller because they don’t use the 3.5 mm jack for audio. Feighery says both audio and power can be piped through the Lightning connector.

FlyPad mounts don’t have the cooling option, but the company says owners who have installed the product report not needing the cooling. FlyPad has mounts for the iPhone 5/5S ($179), the iPad mini ($199) and the iPad Air ($229). The iPhone 6 isn’t covered because demand for it is too limited.

While not specifically a panel-mount solution, Aircraft Spruce and Specialty offers a device called the iPad Undermount Stowaway. It works like a sliding drawer on a pair of runners that attach under the panel, with a provided aluminum angle to brace the mount against flexing.

To install it, you ‘ll need depth under the panel with no obstructions such as wiring or hoses and nothing obstructing the slide out of the drawer. The stowaway can be used to get the iPad out of the way or, presumably, use it in place if the viewing angle is acceptable.

If we could suggest an improvement, it would be a set of instructions with better drawings and fewer typos. The Undermount Stowaway is available from Aircraft Spruce for $169.95 and can be used with the iPad Air or the mini, or any comparably sized tablet.

When these mounts first appeared for portable GPS six years ago, the FAA had no documented position on their legality. Some shops found approvals under Form 337s and others wouldn’t touch them.

The current guidance is found in AC 20-138D and in a policy statement issued by the FAA in 2012. (The reference is PS-ACE-23-01.) The statement refers to a handful of other ACs, but not 20-138D. The policy follows 20-138D’s language in allowing installation of a mount on a “no-hazard basis” as a minor alteration. The installer is required to confirm that the installation won’t interfere with aircraft controls and/or disturb required systems in the aircraft. The device must also be equipped with a VFR-only placard. (On the Guardian and AirGizmo mounts, the placards are molded right into the mount.)

While some FAA FSDOs may not have gotten the memo on this, the manufacturers of these mounts tell us customers haven’t encountered significant FAA resistance.

Our advice is before buying a mount—other than the AirGizmo surface mount products—feel out the shop’s view on installing one on a logbook entry as a minor alteration. Better to discover this before you take the plunge. Our view is that odds appear to favor a problem-free installation.