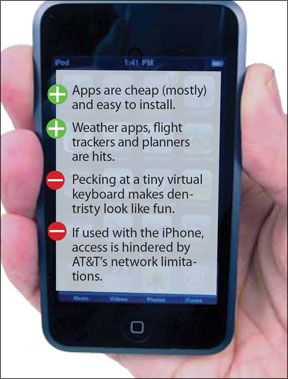 We can imagine only three reactions to the phrase, “theres an app for that.” One, utter puzzlement because youre clueless about apps, two, you recoil in disgust against the overblown preciousness of Apples iPhone or, last, “yeah, Ive seen it.”

Apps are, of course, modest little single-purpose programs that run on Apples iPhone smart phone or iPod Touch MP3 players. At last count, there were more 140,000 apps and at least 195

of them are aviation applications of some kind.

In this report, well take a minimal survey of a handful of these but, more to the point, well examine the basic Zen of apps. Are they just gimmicks or are they really useful? (Its a little of each, in our view.) Worth noting is that other smart phones like the Android-based products and the Blackberries also have aviation apps. Well get to those later.

Unique to the iPhone is that Apple is a computer company that pioneered the mass market MP3 player. As a result, Apple sells both the iPhone and the iPod Touch, which is essentially the same hardware but without the phone. We tried all of the apps on the Touch, but this limits where some of them can be used.

The magic of many of these apps is that they download data in real time-such as weather reports, flight tracking data, NOTAMs, chart information and so on. The iPhone can usually do this from wherever a cell signal is available, but the Touch is limited to use with Wi-Fi networks-no Wi-Fi, no real-time data.

If you have an iPhone, the apps are there for the buying. If your cell provider doesnt do iPhones-hear the howl from millions of Verizon subscribers-you can buy a third gen Touch for under $300 and if you want a good MP3 player, plus the apps, we see this as a good value.

Apps break down into six general categories: flight planners, weather getters, utility programs, logbooks, reference tools and games. Some apps do several of thses functions. Reference tools include everything from FAR/AIM compendiums to test prep programs. Apps range in price from free to as much as $99 for specialized programs such as an Eclipse 500 utility. Of the 195 aviation apps in Apples App Store, some are specialized weather getters dedicated to a single city. Others are of questionable aviation application: The Texas Transportation code? Well pass on that one, at $4.99. Here are some highlights.

This is presumably one of the more practical app categories, since checking weather on the fly is a plus. At the free end of the scale-we like free-or for under $5 are apps like AeroWeather, World Aviation Weather and U.S. Nexrad Radar. AeroWeather lets you specify a list of stations for which the app will retrieve current METARS; NexRad grabs current radar imagery from 150 sites and lets you take a peek at the big convective picture. Another variant, MyRadar Pro, does the same thing for $1.99. World Aviation Weather also grabs METARs for specified stations and also gives domestic weather reports. It will actually cache data for viewing in flight or out of cell/Wi-Fi range.

The better weather programs cost more and may require a subscription. Garmins MyCast, at $9.99, is an example. It will grab most of the popular weather products-including NEXRAD-and overlay this information on a proposed route. It also allows you to file a flight plan, all from your phone, via DUATs. The data sub is $9.99 a month.

Another popular suite of apps comes from ForeFlight, which offers charts, airport directories, flight planning and weather. As with MyCast, you key in the departure, destination and route and it collects all the relevant weather, plus NOTAMs in a crisp, logical format. This is an app with a purpose. Downside? Its a pain in the butt to key in the data with the iPhones cheesy little virtual keyboard.

Although every modern GPS navigator has E6B and unknown wind functions, evidently app developers think phones need to do this, too. Admittedly, they do it well, since theyre fast-as-blazes at calculations.

We liked myE6B which, for $7.99, does all the usual E6B functions, plus hydroplaning calculations. It also has a built-in

weather retriever as a nice add on. A more expensive app ($19.99) is Co-Pilot Flight Planning, which performs all the calcs for multi-leg dead reckoning. Wonder if a DPE would allow it on a checkride.

For $4.99, Flight Touch does similar E6B crunching with a cleaner visual format for inputting. We give the developer credit for getting the iPhone visual interface in a way that eases the keyboard drudgery. This app also does weather and weight and balance, which many of these utilities throw in as a gimme. Another such program with more of an international flavor is PreFlight which, at $16.99, we didnt try. A couple of reviewers gave it a lukewarm response.

And this illuminates a problem with picking an app. Many of these utilities have overlapping functions and price is no indicator of quality. Just from our scan of the aviation apps, we noted that theres wide variation in how each one handles certain tasks. Some are good weather getters, but less good at E6B functions and some are the reverse. Unfortunately, you cant really tell much from the summary description since the summaries arent detailed enough. On the other hand, products with strong user reviews are likely to be good bets.

For apps costing less than $10, a buy-and-try strategy may be the best way to proceed. At $20 or more, buyer remorse is not only possible, but likely. Further, apps churn in and out. Some 15,000 have dropped off the radar.

Closing out the utility category are logbook functions. App developers seem to think logging is a hot topic because there are a lot of logbook utilities. Some, like the free LogTenBasic, simply record flight and total the categories. The $9.99 Flogger adds features such as customizable summaries and sophisticated interface with computers. Color us clueless, but we dont get the big interest in filling out logbooks. A simple electronic entry with categories will suffice, in our view. But if you want more options, the app world is awash with them.

One of the coolest bits of hardware in the iPhone/Touch is the accelerometer that flips the screen from portrait to landscape mode with liquid smoothness. But many veteran iPhone users come to hate it, because certain functions are disabled in landscape mode. But the app writers have turned the accelerometer into a centerpiece.

iSmartEFIS ($9.99) uses the accelerometer and GPS to render a PFD simulator, while iHUD at $5.99 works similarly. These are intended as games, not flight-ready backups for your G1000. For 99 cents-about what its worth-theres Aircraft G-Meter, which uses the accelerometer to make an electronic g-meter. It works, too, but is probably too sensitive to be reliable. Do the salt shaker with it and youll see 5G, easy.

Still, the accelerometer does shine in the game apps. Flying Aces ($3.99) is a little shoot-em-up video game that gives the player a through-the-HUD view of approaching enemy aircraft. To maneuver, you tilt the device for bank and pitch. Control response is well damped and realistic.

But back to the serious stuff. Pilots and instructors have need for reference materials like regulations, manuals and charts. The apps are generally good with former, but not good with the latter. Example: FAA FARs for Pilots and AMTs at $6.99. The entire volume is there, easily searchable and bookmarkable, generally readable. For the AIM, PilotAIM has you covered for the same price. There are other versions that cover this territory.

Charts are less of a hit, in our view. ForeFlights Charts provide the entire sectional library but the device just isnt optimized to squeeze a yard square sectional into a tiny 2-inch by 2-

inch display. Apples clever pinch scaling and scrolling makes them readable, but we just dont see the point. Same deal with ForeFlights NACO airport diagrams-readable, but not especially useful, in our view. Youd likely have something better available, like an e-reader or paper.

Weve barely scratched the surface of available apps, which may be just as well because in our view, many of them are about as necessary as a 500-pound ball of string. The attraction of apps is mostly novelty-cool little geegaws that dont cost much and dont do much, either.

But there are diamonds in this rough. Apps like ForeFlights mobile series offer practical ways to get weather and file flight plans on the fly. The same applies to reference apps for FARs, AIM and other data, plus test prep helpers.

But to make any of these worth pursuing, you have to be smart phone oriented. In other words, if youre frustrated by pecking at a tiny virtual keyboard or putting up with the iPhones quirks, apps will be things you buy, use once and forget.