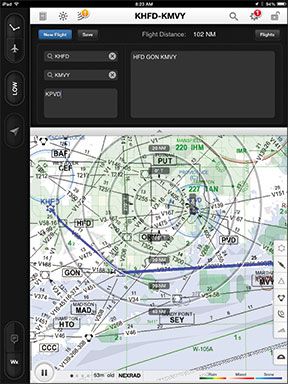 In a world where aviation apps are overloaded with features, Jeppesen believes that pilots should spend more time flying and less time operating their iPad. As a result, they’ve reworked the user interface on the FliteDeck app so that it’s based more around an IFR pilot’s workflow and requires less hunting for information.

Many of the enhancements to Mobile FliteDeck 2.1 is the result of feedback received from professional pilots. The short list includes limited features we might expect from a modern aviation app, including own-ship position on charts, automatic transition to the taxi diagram upon landing and the ability to view charts before you load them.

Born from VFR
Jeppesen’s IFR Mobile FliteDeck (and even the FliteDeck Pro app for commercial and military applications) originated from and retains many of the straight-forward functions found in the FliteDeck VFR app. The result is an app that’s designed for limited pilot interaction. One concept that carries over from the VFR app is data-driven charting.

Jeppesen is quick to point out that data-driven charts are not PDFs of a paper chart. Instead, charting and mapping is automatically rendered based upon your position. For instance, the area maps and airport diagrams are displayed in a single view, without the user having to toggle between two separate maps to work with them.

The other benefit of auto rendering data, rather than using a static onscreen PDF, is the ability to customize the view. This means you can remove sizable amounts of data that you don’t want to see. Don’t want to see airports on the enroute chart, for example? Data-driven charts enable you to turn them off.
smart, basic planning

You won’t find much glareshield candy in Mobile FliteDeck (that’s the term we use for apps that enable fancy synthetic vision and flight displays). Instead, the Jeppesen app is all business—excelling, in our view—at straight-forward flight planning and the ability to find the data you want quickly and easily.

Jeppesen added enroute weather data to the app, including icing, radar, turbulence and winds aloft, but weather overlay requires an internet connection, limiting weather to ground planning only, in most cases.
The NEXRAD radar can be animated and the system checks for weather updates every 6 minutes. Terminal weather, including METARs and TAFs, are accessible when you call up a terminal chart for the selected airport, or in the apps enroute view, through airport popovers.

Some users might ding the app for not having the layers of gee-whiz functionality you’d find in other apps, but that’s not what Jeppesen set out to do. Instead, it’s all about utility and easily creating a flight plan.
One easy way of creating a flight plan route is to open what’s called the route drawer. Simply enter the origin, destination and as many alternates as you wish (these alternates are highlighted on the map). Close the route drawer and a great circle route between the origin and destination airport is displayed. Next, enter the route points in the route box. You can also add a SID and STAR to that route string. We found that an easy way to transfer the route points was to paste an existing flight plan route that was previously entered in the iPad notepad.

Another way to add routes is by importing them from Jeppesen’s FlitePlan Online. Once you enter the FPO account in the device’s global settings, an import button automatically appears in the route drawer. Tap it and select the route you want to add.

We think FliteDeck makes rerouting easy. To add a waypoint to the route, you can tap the search button, where you then enter characters into the search field. The app orders the search results nearest to farthest, from either the chart center or the aircraft position. When you find the object you want, tap the Add to Route key or set it as the new destination.

You can also edit the route by tapping on the object you want to remove, and select the Remove From Route command. You can view the route that’s overlaid over the Low or High enroute maps in either north up or track up configurations, by pressing the onscreen compass rose button.
charting, RANGE RINGS

New to version 2.1 is a chart selection and chart clip function. This gives the user the ability to preview a chart and then add it to a so-called chart clip at the bottom of the screen. Using a two-finger swipe, you can pan across all of the charts that were added to the chart clip. You can also access a different chart group for the selected airport, including SIDs, STARs and taxi charts, from a dedicated chart group menu that lives on the left side of the screen.

Charts can be rotated by tapping a Rotate button on the right side of the display. Each tap of the Rotate button rotates the chart 90 degrees clockwise

Also new to version 2.1 is the display of own-ship on the approach chart, in addition to an off-map indicator. When the own-ship is within 10 nautical miles of the chart area, you will see an onscreen indicator, showing the position and the area from which you are approaching. When you land, the taxi chart automatically appears, based on a preset groundspeed trigger.

The distance measurement tool is a set of range rings on the map that depict the approximate distance of the own-ship from objects on the map. What’s nice about this, in our view, is that the range rings automatically readjust, based on the map zoom level.
jepp’s gift to you

Think of Mobile FliteDeck as an extension of the Jeppesen charting subscription—or Jeppesen’s way of throwing users a bone for subscribing to their data service. We think Mobile FliteDeck would be more complete—and competitive—if it could display ADS-B weather and traffic. This would require an interface with one of the many ADS-B receivers on the market, an interface Jeppesen says they are planning.

Mobile FliteDeck includes enroute charts, VFR and IFR terminal charts and airport diagrams, in addition to Jeppesen’s Airway Manual text data. The application can be used as a paper-replacement solution for RNAV-equipped aircraft.

Any JeppView 3, Express JeppView, JeppView MFD or NavSuite chart subscription allows you to download this data, free of charge, into the Mobile FliteDeck application as long as you have a valid site key. The app can be downloaded from the Apple App Store and is compatible with the iPad 2 and iPad 3. Jeppesen says it is evaluating non-iOS compatibility, but the final decision will depend on user demand. Visit www.jeppesen.com.