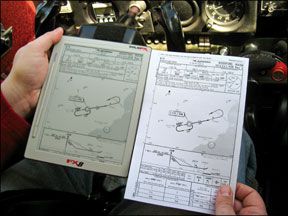 When we reviewed the first Jeppesen plate reader from SOLIDFX in September of 2009, we saw a lot of promise in the innovative software but we found the hardware too big and slow.

SOLIDFX said they were working on improvements to the software and on the prowl for better hardware platforms. Nine months later, they have delivered on both promises with the

Were picky when it comes to these plate readers. They have to hit the Goldilocks zone of comfortable enough to hold in your hand as you could a piece of paper but big enough to view everything you might need to see between the final approach fix and the missed approach without panning or zooming.

The FX8 is all that. Its running on the iRex 800, which measures 7.6 by 5.9 inches and, perhaps more importantly, its almost all screen (8.1 inches diagonal). Its also only 0.4 inches thick and weighs 12.6 ounces. The battery charges off a USB connection, which is also how you update the charts and load any other documents you might want. We left the device running for 12 hours and drew the battery down about 60 percent from a full charge, so SOLIDFXs claims of 24-hour battery life are reasonable.

The screen is not touch sensitive. To tap on-screen buttons you must use a special stylus. This is an overall downside, in our opinion, as you have to keep the stylus on a lanyard around your neck or hanging from the panel to prevent dropping it somewhere out of reach in the cockpit. You can control the FX8 via the button and switch on the left side of the unit, but its cumbersome for anything other than paging through a list of preselected charts.

One plus of the pen, however, is a built-in writing pad. You can call up blank pages to copy clearances or even mark up approach plates. SOLIDFX plans to have an option to import custom documents to mark up with the pen, such as loading manifests. The iRex reader is designed for eBooks and can read PDF documents. This is handy as you can toss your maintenance manual on the device when you travel, as well as those romance novels you secretly read on long, en route stretches.

The real innovation of this reader is how it organizes charts. There are four blank tabs across the top (there are six on the

bigger-screened FX10). Tap a tab and youll be prompted to load an airport. You can enter the ICAO identifier or start tapping the name of the airport or city. The search is progressive, so options get fewer as you tap. The screen update is not speedy, but you can tap out several letters and then let the screen catch up. Any airport can be saved as a favorite for faster retrieval later.

Once you select an airport, it loads into that tab and you can see all the documents in a list. They are grouped by arrival, departure, airport diagrams and approach. Chart NOTAMs and basic airport information also appear on the page for each airport.

Tap any chart and it appears, fit to the screen top to bottom. Thats about 80 percent the paper chart size, but we found it readable. Buttons also appear down the right and left sides for taking notes, flipping to the next chart for that airport, hiding the buttons and some other basic functions.

With a tap of the “fill” button or a gesture of the pen, you can make the chart full width on the screen. This makes it as big as a full-size Jeppesen plate and completely readable. That said, all of these eReaders have black type on a gray screen thats just a bit harder to read than the stark black-on-white of real paper. Also, none have a backlight, so youll need cabin lights or a flashlight to read them at night.

The pen does two neat tricks when it comes to viewing the chart. If you flick the pen across the screen, the chart will slide the same distance. This makes it easy to read the briefing strip for the approach and then flick the chart to see the plan view, profile view and minimums for the rest of the approach. You can also circle any area of the chart to zoom in on it. This is particularly handy on complex airport diagrams. There is no GPS in the FX8, so dont expect to see a little airplane icon on any of the charts. Theres also no current option to display en route or area charts on the FX8.

There is one more tab on the top of the main viewing screen. This is a clipboard. Tap a checkbox by any chart on the other four tabs and it appears on this fifth. You can drag and drop these clipboard charts into any order. The result is a little chart book where you can flip from chart to chart in the order youll need them for the flight. Getting the FX8 to correctly register taps in these checkboxes was the only function we had trouble

with on the device. Sometimes it checked the box. Sometimes it displayed the chart. We ended up using the hardware buttons to get reliable results. Along those lines, we often found flipping from chart to chart in a sequence was better done with the long switch on the left side of the device.

When youre done with data on any tab, a tap of the clear button (and a confirmation tap) wipes the slate clean for the next flight. While were talking about things disappearing, the FX8 has a lock function to prevent any changes on screen during critical phases of the approach.

Jeppesen charts have always occupied the premium service niche when it comes to approach charts. The FX8 is no different, with chart subscriptions running a comparable amount to paper chart service. Expect to pay about $710/year for U.S. coverage. If you already have a JeppView subscription, you can add the FX8 option for $55/year.

The FX8 itself costs $1195 for the reader and the SOLIDFX software. Thats the price with or without 3G service. The 3G service is strictly for use as an eBook reader. Update to the FX8 charts are via an internet download and the familiar JSum software from Jeppesen. The larger FX10 is still available for $1595.

While weve always questioned the cost-benefit equation of Jeppesen charts, for those who want them we think this reader is-finally-a practical replacement for paper. We would feel perfectly comfortable leaving the paper charts at home. The tradeoff in visual contrast or seeing most, but not all, of the chart at full size is more than outweighed by the benefit: Approach plates for as much of the world as you want on something that weighs less than a pound and can stay on all day. The device is even more of a boon for international fliers who must use Jeppesen to get the multi-country coverage they need.

The iPad and similar devices may eclipse the FX8 in usefulness, but, even if it does, SOLIDFXs terrific software should find a home on that device as well.