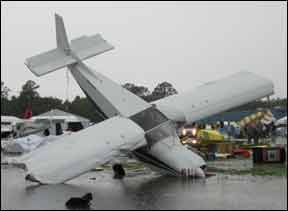 Sun n Fun 2011 may very well go down as the year of The Claw, the ubiquitous yellow three-leg tiedown system that dominates the portable tiedown market. When an F1 tornado roared through the airport, The Claw got its supreme test. Did

it pass? It generally appeared to perform well and the company wasted no time getting testimonials up on its Web site. But there were dramatic failures of all the tiedown systems, including The Claw. Although The Claw staff told us no portable tiedown system could hold in the kind of winds that struck Sun n Fun, we think there are methods to tiedown that will survive those kinds of winds.

After the storm abated, we walked the line and examined and talked to various owners about their tiedown strategies. The Claw was the most widely used. It has been aggressively marketed and with its unique, stake-and-leg design, its easy and quick to install. Based on our tests, its performance is highly variable depending on soil type and conditions. (Too dry is as bad as too wet.) Our tests have revealed pull resistance between 200 pounds and 600 pounds, but never the 1200 pounds the company claims.

Nonetheless, it appears that The Claw probably held fast more often than it gave way and many owners approached the Hunting Solutions booth lavishing praise on the product. The company promised to replace any broken anchors and handed out at least two sets while we were there.

“Id use them again in a heartbeat,” said Dan Mercurio of Van Bortel Aircraft. “They held great.” Mercurio had a Cessna 182 secured outside the main hangar area. On the other hand, in the American Legend booth, Dave Grahams experience wasnt so positive. One of Legends Cubs blew into the tent after the Claws securing it pulled out.

As shown in the photo, one of the anchors failed in a way we saw repeated several times, including in our own tests. When the anchor begins to pull out, it rotates, side loading one leg and snapping it near the center mount. (Heres a video showing the physics: http://snipurl.com/27qrg5)

We know Hunting Solutions has seen this before, so we asked if they plan a fix. The answer appears to be no, since owners say they want a light, easy-to-carry tiedown system that fits into a small bag. The companys Bill Alexander told us they have experimented with larger, heavier hardware for The Claw, but the market simply isnt interested in either paying more or carrying the additional weight.

In our previous tests, the so-called doggie or K-9 augers that show organizers sell as a in-a-pinch solution have yielded mixed results, with pull resistance ranging from 200 pounds to more than 500 pounds. These products vary widely in quality and in the 10 years weve been testing them, weve noticed a troubling trend. Most are manufactured in China and the metal quality seems to have worsened.

If you use a pry bar or long screwdriver as a lever to screw the auger into the ground to its hilt, youre likely to fatigue the metal where it bends to form the triangular anchor point, weakening it or breaking it outright. We experienced this

In the real-world tests at Lakeland, we didnt see any failed K-9 anchors, but we saw pull outs from saturated or weak soil, or from anchors simply not driven deep enough. But we also saw many that held just fine. According to our tests, both The Claw and the K-9 anchors provide more pull resistance if situated under the tiedown ring, rather than at an angle. For rope, use -inch Dacron instead.

Were sticking with our recommendation that The Claw is the all-around best and most practical commercial system. If fits in a bag, comes with a hammer and straps and is easy to use. Better yet, if it breaks, the company will replace it. Still, theres theres a better solution, in our view, and thats the homemade heavy

tiedown anchors used by Diamond Aircraft, JAARs and others in their display booths.

These variously consist of -inch steel rod or rebar with a T or eyelet welded at the top. Theyre between 18 and 24 inches long and will penetrate beyond any rain-soaked and mushy layer of top soil. With a shear point ground on one end, theyre easy enough to drive into the ground with a medium-sized maul and are extractable, but with effort.

The JAARs system uses three of these stakes driven into an inverted cone pattern at each tiedown point and joined with a chain. Think of it as a giant, heavy duty Claw. We suspect theyll hold in any wind. Diamonds version, pictured on page 11, is driven in at a 45-degree angle to the horizontal, toward and outboard of the tiedown ring. In other words, the tiedown rope pulls perpendicular to the axis the

rod is driven on. You see this type of stake used to anchor large commercial display tents. Its sometimes driven right through pavement.

Diamond used heavy cordage to snug their airplanes down and none of them budged, even as Rans LSAs were being ripped out of the ground like kites. The downside of this system is weight and cost. We would estimate the total weight at 10 to 12 pounds for the Diamond-type design and at least 30 pounds for the JAARs version, compared to about 3 pounds for The Claw. But the tradeoff is greater holding power, which JAARs Darryl Neidlinger told us easily resisted the Lakeland blow.