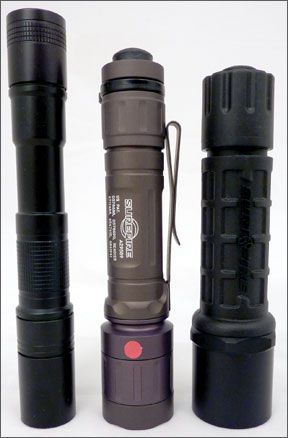 For the pilot of even modest equipage, a flashlight is something of a necessary fetish item, so much so that some pilots we know carry a half-dozen in the cockpit. Fear of darkness or just prudence? Both, we think.

A decade ago, most of us bought a D-cell bat handle with a penlight backup, but now the market is flooded with sophisticated LED choices. And in our view, LED is

the only illumination type worth considering, given the variety of choice, low power consumption, durability and color choices.

And what choices there are. We shopped the popular pilot emporiums and Web sources for some practical choices and winnowed the field down to 15. You might pick an entirely different 15, but we have to start somewhere.

Were skipping the large D-cell and C-cell models in favor of smaller two and three-cell LEDs. These smaller flashlights provide more than enough choice in illumination. The FAR requirement (91.503) applies only to large and turbine aircraft and is woefully outdated in an age when two AA batteries drive an LED for a week.

Some design criteria: Given the power illumination from LEDs, we think a smaller flashlight is more desirable than a larger one. Its easy to carry, point, aim and stow. Most of the models we examined are in the four- to six-inch range.

Second, batteries: The favored battery in these small LEDs is three AAAs in a carrier. The expensive flashlights have 3-volt lithiums ($7 to $9 a pair), but these are long lasting so the sting isnt so bad.

In the cockpit, AAAs dont play in other gadgets like GPS, so that means carrying more battery types. Also, the carriers can be a nuisance to load because polarities arent always marked clearly. Again, you dont have to do it often, but you wouldnt want to load batteries in the dark. (Thus the argument for a second or third flashlight.)

How about color? More of the LEDs are now offering color choices, either via snap-in filters or actually switches to energize a different color LED. Forget the filters; youll lose them. See the sidebar at right for some advice on color choice.

Brightness? It isnt everything. In fact, too bright is a nuisance because even when night vision doesnt need to be preserved, too-bright flashlights just hurt the eyes and are usually unnecessary except in rare circumstances. Last, Soviet vs. Western. You can now drop $250 on a flashlight if youre inclined, which brings to mind the Western philosophy of weaponry (fewer but of higher quality) versus the Soviet model (cheaper but more of them.) This is largely a budget factor, in our view. The expensive lights work better, but maybe not eight times better to justify their prices. So cutting right to the chase, our chart at left ranks the flashlights roughly by cost, with the high-price cutoff at $70. Youd expect a $200 flashlight to be really, really good and the Surefire A2 Aviator is. Its the perfect size and superbly made of hard anodized aluminum in the tactical style. Detailing is excellent and it has both red and white LEDs, switchable by a twist cap on the back. Its not the brightest, however, but its bright enough.

Unique in this group is the flashing strobe mode found in the $87.95 XeVision XV-C2A. This a penlight style with AA lithiums instead of the 3-volts, a plus. Its a little brighter than the Surefire, but has no other color options. The strobe activates by alternate pushes of the switch.

Not all of Surefires products occupy the top price tier; the G2 sells for $69 and is made of a tough black polymer with a twist switch. Good brightness, but a single color and nothing special, in our view.

Intense competition has settled the LED market into a nice compromise: Fairly sophisticated and well-made flashlights in the under-$40 range. There are a bunch. Our two favorites are from-surprise-Smith&Wesson. These are made under license by Powertech, which has a range of tactical-style lights.

Our top all-around best choice of all of these flashlights is the $27.50 Smith&Wesson 12 LED from Aircraft Spruce. Its well made of anodized aluminum and powered by three AAAs in a carrier that doesnt drive us completely nuts to load. Best of all, it has red, green and blue options and the white tends toward the dim range. Why is that good? As we mentioned, too-bright is worse than too-dim. Middle range illumination gets the job done without the dazzling effect. Were not jacklighting deer, were doing pre-flights and reading charts.

Second choice is also by Smith&Wesson. For a few bucks less, the $24.95 Galaxy is similarly well made, albeit longer and skinnier due to its two AA-cell design. It has both white and green options and green is our top choice for night chart reading. Neither of these lights have options for a lanyard, if that matters to you.

We found some other good choices in the mid-price range, including two models from Dorcy, the K2 and Hawkeye, the latter $12 more expensive, although were

not sure why, given their similarities and almost identical brightness. In fact, the Hawkeye was the brightest of the lot so if you need a second flashlight with a long throw, its a good choice. The beam is hot, bright and well focussed. At the very bottom of our chart is the slam-dunk best value we found: Aircraft Spruces $8.95 9-LED flashlight. Its at the low end of the brightness range, but has better fit and finish than some of the products costing three times more.

If you have $199 that you absolutely must dispose of, the Surefire A2 is a terrific flashlight, in our view, and sports a lifetime guarantee. At two bills, it ought to be a pleasure to use and it is. Its the right size and the dual color is a plus.

Otherwise, the two Smith&Wesson models stand out as the best overall choices in terms of quality construction and features, and they use readily available batteries. We think color choices are a must for night chart reading and these two have that.

Worth mentioning is Sportys mid-brightness 100 LED flashlight, the 12-gauge shotgun of flashlights. The beam is diffused but it will light up the inside of a hangar like a torch and sometimes you need that. At under $40, its a good value.

Spruces bargain LED light stands out because you could buy five of them for under $50. If theres reliability in numbers, thats one way to get at it.