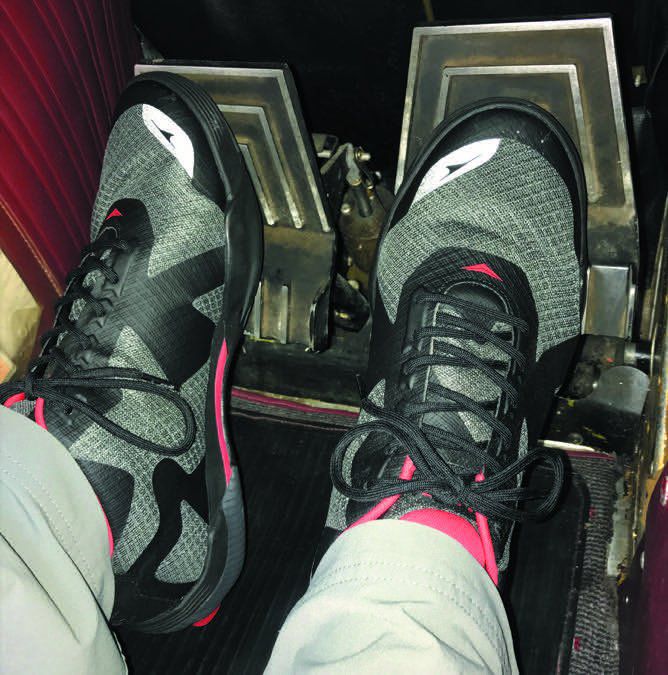 an acquaintance who pilots an MD 500 helicopter while barefoot says her bare feet on the pedals makes her one with the machine like no pair of shoes can. I get the need for feel, but to protect her toes, I suggested compromising with barefoot running shoes. I even stopped flying in shorts because I’m paranoid of a cabin fire.

Increased dexterity is partly the idea behind LIFT Aviation’s line of aviator shoes, but safety and comfort are the primary goals. The company attracted attention at AirVenture this past summer, selling aviator shoes to pilots who didn’t seem to bat an eye at the $119 starting price. To see if these shoes are for real, I ordered a pair and have been wearing them in and out of the cockpit for a couple of months. Here’s a field report.

LIFT is far from an industry newcomer. Its staff has been developing protective products for the extreme sports and occupational safety markets for over 30 years and the company president is a pilot. Early on, sister company EVS Sports (which designs and manufacturers the industry’s largest line of motocross knee braces and body armor) made sizable inroads in the racing industry before LIFT Safety was created in 2006, followed by Lift Aviation. Some of LIFT’s lead designers come from Alpinestars—a familiar name in motorcycling/auto racing apparel and protective gear. As a result, many of the shoes in the lineup resemble driving and motorcycle track shoes. LIFT also caters to law enforcement, military and the oil and gas exploration markets. Now it targets general aviation with several shoe styles at various price points, starting with the entry-level $119 Spinner, which LIFT puts in the casual shoe category.

All of the shoes in the aviation line have LIFT’s patent pending Flight System heel sliders, an injection-molded frictionless cleat set designed to keep your heels from getting snagged in the aircraft’s carpeting or floorboards. In real-world ops, this could mean getting your feet on the toe brakes more quickly if you aren’t quite positioned right on the pedals—which has happened to me after repositioning the seat while in cruise.

The shoes also have bilateral gripping (called G-Traction) that LIFT says is designed to make accurate and direct contact with the rudder pedals. While the shoes have an exceptionally narrow footprint that makes it less awkward to swing the feet into and out of the cockpit (I wore them while piloting a Skyhawk, a Cirrus and a Mooney), I couldn’t notice a big difference in rudder pedal contact between the Air Boss sport-style model I tried and my Salomon trail running shoes that I usually fly with.

One thing I did notice was the LIFT’s sticky slip-resistant outsoles, which are also oil and heat resistant. If you do any wrenching, they can serve as comfortable hangar work shoes, minus much if any impact protection. One of the reasons I like to wear trail running shoes when flying is the increased traction when climbing around and jumping off the wing, for example, and the LIFT shoes are about the best I’ve worn for anti-slip performance—wet and dry. If you fly something where you have to climb on the structure to check fluids and perform other duties, these shoes might keep you from falling off.

Speaking of falling off—and in—I wish the minimalist sport models were waterproof for seaplane flying. If you fly off the water you know your feet are sure to get wet. I wouldn’t want to completely submerge the Air Boss shoes I tried in fear of long-term water damage to the insoles.

As for comfort, LIFT nails it and that’s partly because of the highly cushioned sole that allows for increased flexibility in the toe area, but stiff support in the heel—a potential stress point in other shoes. I had no problem wearing the Air Boss model for an entire day (others I talked with reported the same level of comfort), which included lots of walking. In fact, I rarely noticed they were on my feet.

All models have machine washable and lightweight OrthoLite insoles, a third-party brand that’s popular in other high-end shoes (including Nike, Salomon, Rockport and New Balance, to name a few) and the memory foam technology helps the insole maintain nearly the same level of cushioning and fit over a period of time. OrthoLite’s open-cell foam is advertised as being nearly 100 percent breathable and it is indeed effective. In the hottest conditions, my feet never sweat in the Air Boss shoes while wearing a high-quality sport sock—which is not the case with my trail runners.

The $139 Air Boss is available in three colors including black/red, grey and a lighter grey with yellow accents. The other sport-style shoe is the $169 Talon, constructed with LIFT’s Response Core carbon fiber midsole for stiffer mid-foot stability. It’s available in black/red, black and blue. Most of the sport and casual LIFT shoes are sized smaller than a typical dress shoe and the company suggests ordering one size larger than your ordinary shoes. This advice was spot-on for me and yielded a perfect fit.

LIFT says pro aerobatic pilots prefer the two stiffer models, which include the aforementioned Talon and also the flagship Merlin, which is also marketed to professional pilots who have to wear black shoes as part of a uniform. One Merlin model is a so-called commercial version that’s black, has a fire-resistant Carbon X liner, high-heat rubber outsoles and Nomex laces. It has a perforated Clarino liner and insole, plus a carbon fiber midsole.

If you fly in a uniform or business attire, you might get away with wearing the $189 Dakota model—an all-leather shoe that comes in brown or black.

LIFT sells its shoes directly on its website (www.liftaviationusa.com) and through Sporty’s, Aircraft Spruce, Pilot Mall and Mypilotstore.com. Contact LIFT Aviation at 262-394-5370 in Walworth, Wisconsin.