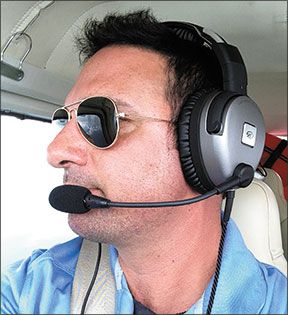 in our August report, we were impressed with Lightspeed Aviation’s new Zulu PFX headset, but had issues with consistent ANR performance. At press time this month, Lightspeed sent us a new headpad that improved its fit and performance, transforming the headset.

After exhaustive flight trials, we initially found enough to like to recommend the Zulu PFX as a worthy investment, particularly given the new digital technology that’s behind it. Still, we favored the aging Bose A20 after a side-by-side comparison conducted in a variety of aircraft. Based on feedback from some other users, we weren’t alone.

One of the nits we and others had was that the ANR performance was impaired by turning the head (or entire body) 30 to 60 degrees to either side. The resulting rumble and distortion was especially pronounced with the left earcup pointed toward the front of the airplane.

Moreover, our sense was that the Bose does better at stifling lower frequency noise. But all of that is fixed with a simple replacement of the padding that attaches to the headband.

Critical fit
A proper fit and seal around the ears is the key to solid noise-cancelling performance with any ANR model. Unfortunately, that can be difficult to achieve. Small heads, big heads, glasses, ballcaps—these are all factors that can greatly alter the performance of noise-cancelling circuitry.

In our PFX trials, we used an early production unit equipped with the standard headband padding that fits between the underside of the headband and the head. For some users (us included) the thinner padding design doesn’t offer enough downward adjustment of the slider to place each earcup entirely over the critical area on the side of the head. Turns out this was the culprit that contributed to the lousy ANR performance we sometimes experienced during the evaluation. Still, it proved a valuable lesson.

While all ANR models have a fixed level of noise cancellation and audio profile, the PFX—with its software- controlled circuitry called Streaming Quiet—offers a personalized noise-cancelling signature that maps to the ears and customizes the noise cancellation. While this software can compensate to some degree, the headset still requires a proper fit.

Lightpeed’s new Zulu PFX matches the Bose A20 in price, and now that we’ve dialed in the performance of the ANR circuitry with an easy swap of the headpad, we think it matches the Bose’s ANR performance. On the other hand, whether it’s more comfortable is a personal opinion, and some users we spoke with that have purchased the PFX think it is. We think it’s more forward-thinking.

“The smartphone became a device that provides so much more information and benefits and continues to evolve all the time. This is what the firmware upgradability and the processing power of the Zulu PFX means to the headset category,“ said Lightspeed’s Ed Hanson.

If you are going to invest $1100 in a headset, we think it’s important to try it before you buy it. If you already bought a Zulu PFX and experience ANR problems, Lightspeed’s Hanson said to call the Lightspeed customer support team and tell them you need a tall headpad, at no charge. Contact www.lightspeedaviation.com, 800-332-2421.