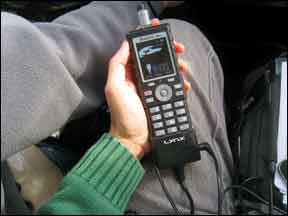 Several years ago at Oshkosh, we saw a unit called the Angel that was designed to add Bluetooth connectivity to a headset, complete with a full telephone keypad and music inputs. The product looked promising, but we never got one to test before the company vanished into the great aviation business abyss.

The Angel was licensed and improved upon by the well-respected Headsets, Inc., of Amarillo, Texas, (who also acquired and now sells the DRE line of headsets). The reborn device is called the Lynx. It’s available as a $449 device to add Bluetooth and other features to your current headset, or for $599 you can get it mated up to the DRE 6001 ANR headset as a complete unit. Considering the DRE 6001 is normally $476 on its own, that has the makings of a pretty good deal.

A Mixed Bag
We tried the Lynx-headset combination, which is called the DRE 8001. But the real story here is the Lynx controller itself. On the plus side, the unit feels industrial strength, with big buttons that are easy to see and push. They’re also backlit for night ops (and the controller screen automatically dims). The Lynx’s battery is rechargeable via a USB plug and can power the ANR. If you’re just buying the add-on unit, Headsets, Inc., can hardwire the unit to your own headset.  There’s a battery-level indicator right on the controller screen. We like that.

The Bluetooth system to pair a phone or music source works well (although our unit still identified itself as “Angel” over Bluetooth). There are additional wired inputs for music or cell phones, and also a wired output if you want to record the audio of your flight.

The words “and also” seem be central to the Lynx marketing strategy. The controller’s five-way switch lets you page through multiple menus to set reminders to switch fuel tanks, set multiple approach timers, access E6B functions for all phases of flight and control your remote music. There’s a phonebook and call list downloaded from your phone. There’s a thermometer. (No we don’t know why, either.)

We think this is where the sell-copy of the Lynx breaks down. Do you really need all this stuff? Will you use it? We found the implementation lacking in places as well. Set the volume of your music too low and you won’t hear your tank-switch reminder. Approach timers beep for a few seconds and then stop automatically, rather than making sure you acknowledge them. (Who times approaches any more anyway?) Sure, there’s a missed-call list on the headset controller, but how many missed calls are you going to get in the air that can’t wait until you pull out your real phone after landing?

Too many features get in the way sometimes, as well. There are controls for the remote music, but they require navigating menus to use them. Competing Bluetooth add-ons and headsets have dedicated controls for this so the common action is a one-push operation.

Because we only tested the Lynx with the attached DRE headset, we can’t speak to its audio fidelity for music. A DRE strongpoint is industrial toughness. We don’t think they score as highly on audio quality for something as subtle as music, and the 8001 unit wasn’t nearly as high-fidelity as a Zulu or Bose.

Not Bad, But Not Wow
We’ve given Headsets, Inc., high marks in the past for their retrofit ANR units that turn old passive headsets into ANR ones. We also think the DRE series, while no Bose, Lightspeed or Sennheiser, represents a good value for the money. So if you were in the market for the DRE 6001, upgrading to the 8001 to get the Lynx and headset together makes sense.

But even in this case, we think the Lightspeed Sierra for essentially the same price is significantly more comfortable with better ANR and better overall sound quality, especially for music. The Sierra only allows Bluetooth for a phone, however. Music must be via a cable.

To just add Bluetooth to a headset you own and like, we still think the PilotUSA Blulink is a better deal at $250-$300. It does nothing more than add Bluetooth music and phone with remote controls, but it does it well, simply and cheaper. Unless you’re really jonesing for an approach timer on your headset controller, do you really need anything more?