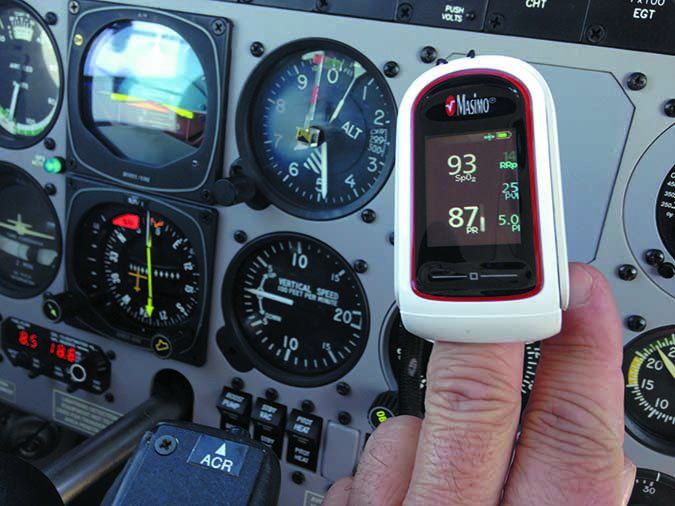 When we reviewed Masimo’s ISp02 pulse oximeter a couple of years ago, we thought it was feature-rich and liked its useful tablet interface, but dinged it for its tethered design. The finger sensor with a 30-inch cable proved too cumbersome for our liking.

But Masimo’s latest-gen finger pulse ox device—the MightySat—changes that for the better with a wireless Bluetooth tablet interface, plus a sophisticated feature set that caters to both pilots and athletes. Masimo is marketing the device though select Apple stores, BestBuy and Amazon, to name a few outlets.

After using the MightySat for a month, we think it’s the most advanced biometric device available to pilots, even though its price might be a stretch for budget-conscious pilots with basic missions. For high-flyers and athletes, we think it packs a solid punch. Here’s a close look.

The MightySat comes in two versions and both have a four-year warranty. There is the $299 MPH-9800, which displays oxygen saturation, pulse rate and perfusion index, while the $399 MPH-9900 (evaluated here) adds respiratory rate and pleth variability index. Both have Bluetooth connectivity and we used the device with the current iPad Mini and with an iPhone 7, noting quick pairing.

Aside from oxygen saturation, a key displayed parameter on the MightySat is the perfusion index, or PI. This is the ratio of the pulsatile blood flow to the nonpulsatile blood flow in peripheral tissue. Simply put, a lower PI value indicates lower blood flow. Masimo stressed that there is no specific normal value for perfusion index. Instead, each individual should establish their own baseline value and note how it changes over time. In our use (for flying and during distance cycling training), our PI remained relatively constant except when it dropped significantly on a cold morning in an unheated cockpit and also during the first part of 35-degree bicycle ride.

Masimo packs a lot of data on the MightySat’s color display, but we found it easy to read at a glance even in sun-splashed cabins and in low lighting conditions. The device runs on two AAA batteries and there is a battery strength indicator at the top of the display. Based on 50 hours of operation with the display brightness at 50 percent, you can expect approximately 1800 measurements at 30-second spotchecks.

As you would expect, the device turns on and off automatically when a finger is inserted into and removed from the padded sampling pad. An internal spring mechanism places the right amount of sampling pressure on the finger, so resist the temptation to squeeze it on the finger because doing so will provide inaccurate readings.

Like most other finger pulse oximeters, a sensor shines a visible red and an infrared beam of light through the finger to detect the changes in color of the arterial blood.

While the display is not a touchscreen, it does have a small touchpad, which is located just below the screen. It’s used to access the main menu, which has settings for rotating the screen clockwise for four different configurations. The pad is also used for turning on the Bluetooth LE transmitter for pairing to a smart device running the Masimo Personal Health application (compatible with iOS and Android), for changing the display brightness and for turning the plethysmographic (pleth) waveform function on or off.

We initially thought the pleth waveform function was more gee-whiz than useful, but it’s really an important tool for monitoring the changes in arterial blood flow as your pulse changes. Pleth waveforms and their variations are used by clinicians to get a better read on signal integrity, unwanted electrical interference and changes in perfusion. When displayed, the scrolling wavelength sits at the bottom of the MightySat’s screen.

The most important piece of data for pilots—SpO2 or the arterial blood oxygen saturation value—is shown at the top of the display. We compared the MightySat’s SpO2 readings (in three unpressurized cabins) to several other more basic fingertip pulse oximeters, including the SPO Medical PulseOx 5500 and the NoninConnect. The Nonin’s SpO2 readings matched the Masimo at every altitude, while the PulseOx 5500 yielded measurements that were consistently higher, by an average of two or three points. Masimo says the MightSat’s accuracy spec is plus and minus two, in standard deviation.

While heart rate (the number of beats per minute) and pulse (the mechanical pulse of blood flow through the capillaries) aren’t exactly identical, we found the MightySat’s pulse rate measurements—displayed directly below the SpO2 value—to coincide with readings taken with a heart rate monitor on a Garmin ForeRunner sports watch, which uses a chest strap heart rate sensor. The MightySat has a field showing the respiration rate, which Masimo calls RRp. Measured in breaths per minute, RRp coincides with the changes in the displayed plethysmographic waveform (an algorithm that allows for continuous monitoring during a respiratory cycle) as a scrolling graphic on the lower portion of the screen. The respiration rate function can be especially helpful to athletes who want to quantify their breathing. The idea is to use the device after a peak workout to see how quickly you get back to your baseline breathing rates. Obviously, a rapid recovery rate is proportionate to your fitness level. But for pilots, Masimo believes RRp can be a useful tool for determining a potential hypoxic condition. Key symptoms of hypoxia include rapid breathing and a rapid heart rate.

Another MightySat function that trickles down from clinical-grade monitors is the pleth variability index, or PVI. The PVI is used to evaluate a patient’s fluid status, but Masimo believes the function is useful to pilots and athletes who want to keep tabs on their hydration. As a general rule, if the PVI value is high, then dehydration could be a concern. For athletes, hyponatremia/overhydration (lower PVI readings) can be dangerous. On the other hand, Masimo cautions that pilots and athletes relying on the MightySat’s PVI function generally aren’t in a controlled environment and the resulting spontaneous breathing causes unwanted signal noise, which leads to inaccurate readings. The drill is to first establish a baseline PVI (a value between 10-20 is considered normal hydration), breathe normally for 30 seconds and then take a reading.

Via Bluetooth LE, Masimo’s Personal Health app displays all of the parameters shown on the MightySat screen (it also works with Apple HealthKit), while storing the data in memory for trending/analysis. You can also email the data, which attaches as a csv file and opens in an easy-to-read chart showing each individual sampling with its date and timestamp.

Still, we think the MightySat interface could be even more useful if it could interface with popular aviation tablet apps, which ideally might warn of hypoxic conditions. Masimo hinted that this capability could be in the works, since it is targeting pilots as a primary consumer. The market for cockpit biometric devices (advanced ones) is stark and the MightySat—with its Bluetooth connectivity—seems perfectly positioned to make inroads. The only cabin biometric panel interface we know of is the Guardian Avionics Aero 455 panel-mounted pulse oximeter (yes, stick your finger into the instrument panel and it takes a reading). It also has an integral CO detector, plus an RS232 serial databus (and also a Bluetooth transmitter) for displaying data on a variety of panel displays, including Garmin’s G3X series and G1000. It’s compatible with some JP Instruments and Electronics International engine monitoring displays.

We rounded up a handful of finger pulse oximeters for a comparison in the March 2013 issue of Aviation Consumer and not much has changed—including the rules in FAR 91.211, which govern the use of supplemental oxygen. We still conclude that oximeters meeting clinical standards are best for cockpit use, whether you fly with supplemental oxygen or not.

As for the Masimo MightySat, it’s clearly more advanced than many pilots need in a basic oximeter. But if you’re a pilot and a serious athlete, we think it has plenty of utility.