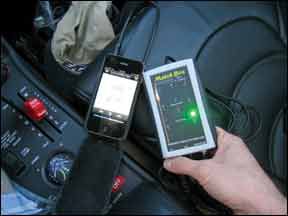 In a marketplace of electronic gadgets that do everything short of sump the gas on preflight, it’s refreshing to find something as simple and task-focused as Matchbox’s Flight Companion. With five buttons and six lights, you don’t need a training video just to turn it on. In fact, the owner’s manual is one page. And the other side is blank.

Plug your headset into the FC-1, plug the FC-1 into the ship’s audio system and push the on button to start. That’s enough to get a fuel tank reminder every 30 minutes, both through your headset and with a flashing light on the FC-1 itself.

Two more buttons and lights are for altitude alerting. When you reach cruising altitude, push the set button. If you stray 100 too high, you’ll get a high-pitched alert and a blue flashing “high” light. Stray too low and you get a low pitch with a red “low” light. To suspend alerting while you change altitudes, there’s a standby button.

All that’s left on the face of the unit is a VOX light that illuminates when there’s intercom or radio traffic and a low-battery warning light. The company claims 25 hours on the unit’s 9v battery.

Speech mutes any music or phone you’re listening to through the MP3/cell interface on the FC-1. We tried both and found they worked flawlessly. Sound quality was only limited by the quality of the headsets we used. We only tried an iPhone for a call, which is one of two devices (the other is a Blackberry) the FC-1 was designed for. Your mileage may vary. Note, as well, the music or phone is only for one headset connected to the unit.

The only usability issue with the FC-1 is it’s cumbersome to have all those wires (headset and music in, plus intercom out) on a box you have to access every 30 minutes or every altitude change, including adjustments due to altimeter setting changes. Matchbox says the cost and reliability of Bluetooth to connect devices or control the unit didn’t work out, at least for now.

The alert levels are a bit quiet for our taste. We forgot to suspend alerting for a descent and spent a while wondering, “what’s that noise?” before we realized it was the FC-1. These levels can be factory adjusted up or down as a customer wishes, however.

The FC-1 costs $299, which is $50 more than a Bluetooth-capable Blulink, so it’s not our pick for just adding music and phone. But if you want both the tunes and the alerts without having to dig into your panel, this little box delivers.