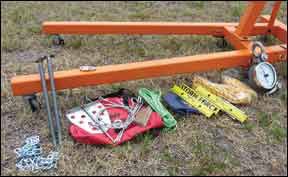 Just as we thought we had put portable tiedown tests snugly to bed, along come two companies who said..sorry, but you forgot us. Following our review of tiedown performance during last Aprils tornado at Sun n Fun, were looking at two products that claim to be the best. (But only one really is.)

We bought a set of Storm Force tiedowns and a company called Abes Aviation sent us a sample kit of its product, one of the most highly engineered products weve

seen to date. Into this mix, we made up a set of steel rod anchors of the sort we saw used in the JAARs and Diamond Aircraft booths to see how they would fare.

As shown in the photos, the Storm Force system consists of three aluminum angles through which what amount to giant aluminum nails are driven at a perpendicular angle to the pulling force. Each angle gets four pins. Ropes, a case and a hammer

Like The Claw, which is the main competition, the Storm Force installs easily, even in hard soil. Using an engine hoist and our pull dynamometer, we tried several tests and, frankly, we werent that impressed with the performance in Floridas poor soil.

The best we could manage was 350 pounds, less than Storm Force seems to suggest on its site and not quite what we got out of The Claw (450 pounds) in our test two years ago. (See the June 2009 issue of Aviation Consumer.)

This sent us in a quest for better soil and a fairer test. We found it in a shady area with a lot of tree roots. There, the Storm Force did much better, resisting some 700 pounds and more in line with the companys claims. And unlike The Claw, we didnt see any structural failures, although the aluminum pins deformed badly.

Using -inch steel rod, we welded up three versions of the homebrew system JAARs and Diamond were using at Sun n Fun. Our rods were 18 inches long, with a steel T crosspiece. If driven in just outboard of the tiedown ring angled toward the ring, these can be used singly (one per ring) or in groups of three, connected by chains for cables.

In our weak soil, the pull performance was so-so, in our view. Both single pins and

three-pin multiple delivered about 350 to 400 pounds of pull resistance. We think they would do better in stronger soil and if driven more deeply. Longer pins are also an option, say, about 24 inches.

Cost of these is about $50 for materials per three pins, plus the cost of the welding, which needs to be done well to keep the T-piece from breaking off during installing. The pins weigh about 2.5 pounds each, plus the weight of the chains if theyre used in a three-pin configuration.

If tiedowns can be high-tech, we suppose these qualify. The anchoring concept is a 7-inch perforated stainless steel plate driven into the ground at an angle to the pulling load. As with the pins, these can be used in pairs or singly.

If theyre used in pairs, the plates are driven in angled away from the aircraft and at about a 45-degree angle to load. A hammer and a wooden pounding block to protect the top of the plate are provided. Two plates are connected via a stainless cable and the tiedown line is connected through a sheave to equalize the load. Getting these things into the ground takes effort, even though the plates are sharpened at the penetrating edge. Furthermore, two additional pins need to be driven for each plate. So if youre using two plates per, youll have to do that six times.

The payoff is absolutely stunning holding power. When our engine hoist proved unable to yank the things out of the ground, we connected them to the truck hitch and kept pulling. This eventually caused the wheels to spin, at which point the dynamometer topped out at nearly 1000 pounds. Were not sure how much higher it would go.

Two cautions: The Abes system requires a lot of scope to achieve this performance, so its important to chock the airplane so it wont roll out of the best load pattern for all three ties.

Second, for as hard as the plates are to install, theyre even harder to extract. But theyre unlikely to pull out. The Abes basic three-kit (6.5 pounds) with one plate per ring sells for $146, while the five-plate kit (two plates per wing tie, one for the tail and 9.8 pounds) sells for $212. Contact www.abesaviation.com.