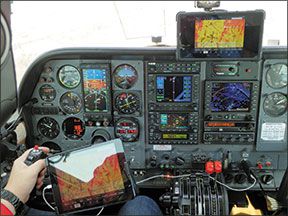 Whether you use a tablet for navigating, backing up flight instruments or fetching information on the fly, you know there are compromises. The reflective screen on the iPad doesn’t do well in direct sunlight, full-size models are bulky when mounted on the control yoke and resting the device on a leg or kneeboard creates distracting heads-down time.

When tablet accessory supplier MyGoFlight showed us its Sight Line Display (SLD) solution at last year’s AirVenture, we thought the concept was good, but was poorly executed.That’s because the SLD prototype used cables to connect the iPad and iPhone to a remote portable display. Wires strung over the glare shield isn’t an ideal situation. But now that the concept has gone wireless, we think it offers some utility, but it’s up to app makers to bring the interface to a higher level.

Airplay mirroring
Colorado-based MyGoFlight didn’t pioneer the technology that enables you to mirror the data that’s on your iOS device to a second screen. Instead, it capitalizes on Apple’s existing mirroring technology, called AirPlay Mirroring. AirPlay started life as AirTunes and enables the wireless streaming of audio, video and metadata between devices.

MyGoFlight’s SLD interface uses a Google Nexus 5 or 7 (that’s a 5-inch and 7-inch screen configuration) Android tablet computer running the AirPlay app, which connects it with the controlling iPad, iPod or iPhone via Wi-Fi or Bluetooth. MyGoFlight bundles the tablet with preloaded software and has a variety of mounts for securing the display.

VERSUS iPAD
We get the concept of a second display to minimize heads-down time, but the obvious question: Why not mount the iPad within your sight line? After all, MyGoFlight offers a variety of high-quality mounts for such (we covered them in the June 2013 issue of Aviation Consumer).

According to MyGoFlight CEO Charlie Schneider, the SLD concept addresses a couple of issues that users experience with cockpit iPad use.

“An iPad on a yoke requires reading a moving screen and, while not as much as a kneeboard user, still requires a head-lowering action. The SLD will allow the use of a sunlight- readable, high-definition monitor for those that find it difficult to read the iPad in certain light conditions. The SLD will also allow the pilot to split the control/operate function from viewing, which may allow for better mounting options,” said Schneider.

In our trials, we mounted the Nexus 7 on the glareshield of a Cessna twin and flew some approaches in bright sun. We found that its 7-inch 1080p HD display performed better in direct sunlight than the iPad mini. MyGoFlight’s swivel Sport suction mount allows for flexible mounting options. It’s also extremely rugged. The Nexus 7 weighs 0.64 pounds, not counting the Seidio protective sleave.

We think MyGoFlight picked the right tablet for the task and give the Nexus high marks for display quality, despite it having a smaller screen than the iPad. Apple’s new iPad Air with its Retina technology has a 9.70-inch display with 264-ppi resolution, versus the 323-ppi HD display on the smaller Nexus. The Nexus battery life can be as long as nine hours. That betters the iPad, based on our experience.

For the evalution, we used the latest ForeFlight Mobile app and connected with a Stratus II portable ADS-B receiver. This enabled ADS-B traffic and FIS-B weather on the SLD. Connecting the SLD was seamless and there were some, but limited, amounts of image lag on the slaved display.

The other nit we have is the inability to customize the remote display. For instance, it would be nice to move the standard Android control keys from the screen or off to the side to gain more real estate. Moreover, having the ability to pinch-zoom and move the image without altering the driving iOS device could provide another layer of utility that doesn’t currently exist.

MyGoFlight said as app developers create ways to overlay a unique image on the SLD, it will be able to provide full-screen imaging from any device to the SLD, no control buttons and ultimately two different views at the same time—one for the iOS device and a separate one for the SLD.

Eyes up for safety
“Historically, there are over 1200 runway incursions each year due to pilots not knowing where they are and not looking outside. While using a tablet that’s outside of the line of sight it takes upward of 10 seconds for a pilot to look down, focus, read, look up and refocus,” said Schneider.

Based on our evaluation, we believe that having the SLD mounted within a direct line of sight can reduce heads-down time. The ability to manipulate the data on the SLD might further reduce heads-down time. The tradeoff, on the other hand, is managing another portable device. We’re concerned about portable tablets becoming projectiles in a crash and the SLD is no different.

MyGoFlight sells the SLD 7 with Sport mount for $397, which includes the Google Nexus 7 unit with the preinstalled AirDisplay that’s configured for use as an Apple AirPlay device. There’s a variety of optional mounting arms and accessories. The smaller SLD 5 is $469 with an optional surface mount. Both bundles include 90 days of technical support. Visit www.mygoflight.com, 303-364-7400.