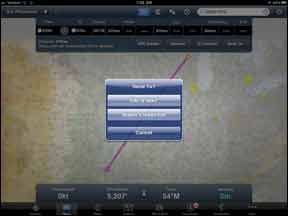 The iPad has taken such a hold of GA that we could easily turn into Apple Pilot Monthly if we weren’t careful. The iPad’s entré was really as a document reader (charts, approach plates, etc.) and preflight briefing tool. But it’s expanded into more of a cockpit resource equal to or surpassing portable avionics.

Connected Panel
We usually don’t review products before we’ve had a chance to actively test them, but we’re making a bit of an exception here. Aspen’s Connected Panel won’t be certified and available until Q4. We tried out the developmental unit at Oshkosh this summer.

Aspen’s Connected Panel isn’t technically an iPad-only system, but the iPad is a natural for using it. The system is a blind-mounted box (called the CG100) that takes inputs from Wi-Fi, Bluetooth or USB. It sends this data via Ethernet to the Aspen Evolution MFD. From the MFD, the data can flow to connected systems like a panel-mounted GPS or nav/comm. The reverse is also true: flight plans or GPS position can flow from the certified equipment to uncertified systems, like the iPad.

We tried sending a flight plan from ForeFlight on the iPad into a bench setup of an Aspen Evolution PFD/MFD and a developmental Bendix-King KSN 770. The flow is logical: plan and brief your flight on the iPad (including filing it if you want), get out to the cockpit, and a tap a button to send it to the Aspen MFD wirelessly. Push another button on the MFD and your GPS is programed. Because ForeFlight automatically decodes airways for you, all the waypoints you need are entered with two button pushes. Pretty slick—especially if you get a reroute in the air with a new sequence of airways.

The KSN 770 can also be tuned from the iPad. Look up the tower frequency for your destination in ForeFlight and rather than dialing it in, tap an iPad icon and accept it into the MFD. It’s forwarded to the comm standby frequency. It sounds gimmicky, but this could be a huge convenience in practice.

The system is designed as an open architecture, so any company could create a use for it. Other flight planning and chart apps, such as WingX and Jeppesen, are developing connected apps. So are companies like PS Engineering, who may use it to push media to their audio panels, JPI instruments, who could download engine data directly to the iPad, and Coradine Systems who plan for automatic logging of flight time to their LogTenPro digital logbook.

“From Aspen’s perspective, we’re creating infrastructure by which systems can be integrated in the uncertified environment,” says Peter Lyons, co-founder of Aspen. “There’s going to be a lot of smart folks thinking about what they can do with this kind of data.”

There are some limitations. Lyons told us a letter from the FAA actually contained the words “heebie-jeebies” at the thought of uncertified systems talking directly to the panel. So you won’t see anything that controls a primary system without a push-button acknowledgement by the pilot. You won’t see traffic from a Zaon portable or weather from an uncertified ADS-B receiver displayed on the Aspen MFD. Lyons says the system could, potentially, act as a hub collecting information from several portable receivers, adding certified data such as GPS position and airspeed from the Aspen equipment, and pushing that back out to a display such as an iPad. This could make for impressive capability at non-certified prices.

The CG100 itself will be a fully certified installation under AML-STC, but should be simple as these things go. The box can go almost anywhere and requires power, ground, a Wi-Fi antenna and a single Ethernet cable up to the Apsen display. The specs aren’t final yet, but the CG100 should be about the size of a paperback novel (if you remember what those are) and weigh less than half a pound. The price is guaranteed at under $2500, but is not yet fixed.

Everything that currently communicates with the Evolution system should work with Connected Panel, so most any GPS from a Apollo GX60 to a new Garmin GTN 750 could output its flight plan to your iPad. Uploading a flight plan from the iPad to the Garmin 430/530 line will be possible, but doing the same to a new GTN navigator will not. Autotuning frequencies won’t work with the 430/530, but may in the future with the SL-series radios. Avidyne has signed on as a Connected Panel partner, so we expect their planned IFP540 nav/comm will leverage the CG100 as much as possible.

Planned improvements to the system that probably won’t make the fourth-quarter release date are support for Android devices or the Seattle Avionics Skypad. Aspen is also looking at versions of the CG100 with an RS-232 input, and a version that only requires a PFD.

iPad AHRS
Hilton Software’s WingX has been pushing the limits of what a portable device can do from day one. WingX for the iPad is the unquestioned champion in total features bundled into an aviation app (although that means it’s not the simplest app to use). This doesn’t bother the company president, Hilton Goldstein, “I’ve always seen my competition as the Garmin 696, rather than apps like ForeFlight.”

WingX may even hold its own against the just-announced Garmin 796 with synthetic vision. The Synthetic Vision edition of WingX can generate a basic 3D forward-looking view with only a GPS signal, but it can also accept real AHRS input from the portable AHRS-G mini from Levil Aviation. The Levil unit isn’t cheap, at $795 without pitot-static input or $995 with pitot-static inputs (experimental/LSA only).

We put a developmental unit through its paces both in normal flight and for some unusual attitude recoveries, comparing its data to a G1000 display. Performance was good enough to get the oily side pointed back at the ground using nothing but the iPad, but we wouldn’t want to fly anything as delicate as an approach using the iPad in lieu of instruments.

To be fair, Levil doesn’t claim that’s what the unit is for. There’s no question it would help keep the pucker factor down as a visual how-goes-it when flying a real partial-panel approach with traditional instruments. Without the AHRS, WingX can generate a synthetic view without pitch and roll data. We think this is a novelty without much real use as it gives a false sense of flying level when you’re not.

The Levil unit we tested wasn’t flawless. It lost its ground reference a couple times, resulting in showing the horizon upside-down for a moment. It resets within about five seconds of level flight, but this underscores the point that you wouldn’t want to fly by it alone. The production unit is said to be more solid in the regard.

The device also must communicate with the iPad via Wi-Fi, which precludes a Wi-Fi GPS. However, WingX is working with SkyRadar LLC to channel the Levil input through the SkyRadar system. This $1200 box feeds ADS-B weather and WAAS GPS position to iPad and works quite well. WingX also just announced a connection to the Zaon traffic system to show traffic on the iPad. Support for XM weather through Baron’s mobile link is in the works. And, yes, they play with Aspen’s Connected Panel as well.

WingX has an à la carte pricing system, with the basic app and data at $100/year (includes charts, approach plates, airport data, etc.), fuel prices are another $30/year and georeferenced charts adds $75/year. Synthetic vision is an additional $100/year, so the costs do add up.
If all you’re looking for is the AHRS, the Levil device also works with iHud for iPhone/iPad. However, this setup is a traditional PFD display with no synthetic vision.

Dual GPS
One of the issues with the iPhone and iPad as an aviation portable has always been the internal GPS for the iPad. First off, only the 3G models have the GPS built in. Even then, the GPS can lose its position in the air—especially if you switch between apps—and it might not recover its position until you land.

That’s why we recommend using an external GPS with the iPad if you want reliable GPS data. We’ve tried both the Bad Elf plug-in GPS and the GPS 5280 MFI Bluetooth system. Both work well. A new contender is the Bluetooth XGPS 150 from Dual (a brand name descended from the turntable makers of yesteryear).

The XGPS 150 is a bit bigger than the average keyless remote for a car. It charges via USB and runs for about eight hours. The button to turn it on isn’t obvious, but once running, it performed flawlessly on our test flight home from Oshkosh. It comes with a rubberized holder that keeps it from sliding on the glareshield—a welcome addition. You can also wear it on an armband for on-the-ground use such as hiking.

We got one report of the Dual interfering with an XM signal. Our follow-up showed two things: We couldn’t reproduce an effect that disrupted datalink weather ourselves, and we were deeply impressed with how seriously the company took the complaint and the steps they took to attempt to recreate it. If this is any indication of how the company will support its customers, those buyers should be a satisfied bunch.

More To Come
Another announcement at Oshkosh was an XM receiver for the iPad that will drive weather into several iPad apps. We’ll let you know what we think of that unit—including head-to-head with the ADS-B alternative—when we’ve had it for a while.

And given the way apps and hardware for the iPad seem to spring from the floorboards wherever we look, it won’t be alone.