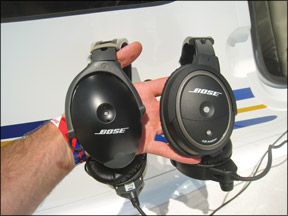 Bose has always held a place at the top end of noise-canceling headsets, with a history dating back to 1989. The company has been virtually silent in the aviation arena for the past 12 years, resting on the continuing strong sales of their Headset X.

But even the Bose devotees have been getting restless due to the lack of auxiliary music input and a Bluetooth connectivity for phones (to be used, uh, on the ground only, of course).

All the while, Lightspeed Aviations Zulu has been steadily increasing its dominance in the premium headset market by offering active noise reduction (ANR) on par or exceeding that of the Bose, along with music and phone connectivity.

At Oshkosh of this year, Bose answered with the new Bose A20. Except for the basic design of the headband, this is an entirely new design, bringing some of the technology from Boses consumer headsets to aviation-and finally offering the music and phone connections.

Bose claims the new headset is quieter and more comfortable than the quite-capable Headset X. Trying them side by side at the Bose demo theatre and in the airplane, wed have to agree. The new earcup design addresses a common complaint that the Headset X was too narrow for big ears. Our big-eared editor confirms this is fixed in the A20. The headset is also noticeably lighter. Even though the clamping force is the same as the Headset X, the new earcups and the new foam pads distribute the force better, so it feels less tight.

The new ANR system employs two mics on each earcup (four mics total) to sense cabin noise and create the cancellation signal to squelch that noise for the pilot. There has always been a mic on the inside of the earcup, to sense sound right at the pilots ear, but now theres also one on the outside of the earcup to sample cabin noise directly. We played with switching headsets between a Headset X and the A20, as well as covering the external mic. We didnt detect a significant difference with low-end engine noise and vibration, but the new system seemed better at blocking high-end whines and whistles.

Bose points to new electronics that process this two-point sample to create a better noise canceling profile, and new speakers they developed that have a dynamic response sensitive enough to actually reproduce that profile as sound (maybe anti-sound is better term). Bose politely declined to give us any further details of these steps.

In addition to the terrific ANR, the headset sound quality for speech and music is flawless. But thats pretty much what youd expect from Bose. As with the previous Bose headset, with a screwdriver and a few minutes work, you can switch the boom mic from the left side of the headset to the right.

The A20 has an entirely new controller to handle the added functions. While not dwelled on by Bose, we were big fans of the new volume controls. The curved wheels are easy to control as a pair or individually, and with great precision, all with one thumb. The wheels are guarded by plastic sides so the volume never changes accidentally, either.

Power for the ANR and activation of the Bluetooth are controlled by separate buttons. Pairing of your phone to the Bluetooth is the usual drill of push and hold a button on the headset and then enter the pairing passcode on the phone. We had a moment of trouble testing it as the headset jumps immediately into pairing mode the first time Bluetooth is used. Once we figured it out, it worked fine. Theres also a convenient system to clear stored pairings if need be.

A nice touch with the A20 is a sidetone when you make calls. This means you can hear your own voice as you speak and it helps keep you from shouting at the briefer youre calling from the cockpit.

The A20s Bluetooth only supports the headset protocol, though. It wont pair with

a Bluetooth music player, such as your iPod Touch. Even if you pair with a smartphone that does both phone and music, the Bluetooth connection will only play audio from phone calls.

Music is connected through a standard 3.5mm jack on the controller, so you will have that patch cable (included) to deal with. Music volume is also controlled at the music player, so youll need to keep that somewhere accessible. A switch on the controller sets whether music is muted for radio or intercom, or if it just plays. We prefer the latter, just keeping the music low enough that a radio call overrides it enough to hear. This switch can also disable the Bluetooth sound. The music jack is input only.

Bose has kept their headset pricing right about $1000 for the entire run of the Headset X, and theyre sticking with that plan for the A20. Its $1095 with Bluetooth and $995 without it (both versions have the auxiliary music).

That price point makes the Bose A20 the most expensive circumaural (over-the-ear) headset, on the market. Admittedly, this is a steady price in the face of 12 years inflation. Running that through the inflation calculator, the A20 would only be $750 in 1998 dollars. Too bad you cant get those dollars anymore.

Lightspeed remains confident their Zulu can hold its own against the new Bose (see page 15 for our comparison). In fact, the day after the new Bose was announced, Lightspeed was inviting people to do side-by-side tests of the two headsets at their Oshkosh tent.

The company feels there is a market for the features such as Bluetooth and music input but at a lower price than their $850 Zulu. Their answer is the $650 Sierra. The Sierra resembles the Zulu in many ways, but the comparison is largely skin deep.

The earcups use plastic in many of the places Zulu uses lightweight metals, and the headband design is different. Lightspeed claims that the Zulu has less side pressure than Sierra, but our testers felt the Sierra seemed less tight on the head than the Zulu. The Sierra also seemed to have a looser ear seal and weaker passive noise reduction. The headband pads are much stiffer on the Sierra, and we found them less comfortable. We stopped noticing it after a while, but we think the headband design is inferior to the Zulus. The earcups share the Zulus soft foam and area large enough for any ear.

The noise canceling is equal to, or better than, most headsets in this price range. Its an improvement from Lightspeeds XL series, so if youre trading up, youll be satisfied there. But if you try it side-by-side with a Zulu or Bose, you wont have to be an expert to hear a difference. One plus of the Sierra is the mic is reversible by simply flipping it around. We dont know of another ANR headset that offers that feature.

The controller is visually identical to the current Zulu design, but its had a few features stripped away. Like the Bose A20, the Sierra Bluetooth is phone only, and, like the A20 you cant cheat that by pairing with your iPhone and then running iTunes.

The Sierra also has a wired music input, but again, like the Bose A20, its music in only. You cant use it to connect a phone. Music playback quality was excellent, indistinguishable from the Zulu with that headsets music-enhancing Front Row Center (FRC) system turned off. FRC was a feature of the Zulu that users could turn on or off with a button. Its now always on for new Zulus and is not an option at all for the Sierra.

Our walk-away feeling for the Sierra was that its a strong option against other ANR headsets in its class. But none of them have Bluetooth. The Sierra is comfortable enough for everyday use. It would be a great headset for passengers if you wanted to pamper them but also wanted to save a few bucks of outfitting an entire airplane with top-of-the-line models. But we have to admit we found it hard to step down to the Sierra right after test flying the Zulu and the Bose A20.

In terms of comfort and quiet, we feel Bose has earned bragging rights for the top spot in aviation headsets. Whether that level of performance is worth the $1095 price tag is the question that we simply cant answer; its too much a personal choice. We cant imagine anyone being disappointed with the performance of the A20, however.

On the other end of the high-performance headset scale, the Sierra offers a compelling range of features for a competitive price. Theres no other headset at that price point with Bluetooth connectivity to a phone. There are several with comparable ANR and music input, so if the Bluetooth isnt that compelling to you, there are many other options.

The other item worth mentioning is a module to add Bluetooth phone and music to a headset you already own. We reviewed the Blulink system in the January 2010 issue of Aviation Consumer and found it delivered on all its promises. The system runs $260-$310, depending on the connector you need. Thats not peanuts, but its cheaper than a whole new headset if youre fine with what youve currently got.

No matter what you choose, we strongly recommend you try all the headsets youre interested in, preferably for several hours of flight time before you make the final call. Theyre all good performers, but only you can put a price on what that performance is worth to your head.